Daniel Ricciardo and Max Verstappen admit Red Bull still doesn't fully understand the reasons for its current deficit to Formula 1 rivals Mercedes and Ferrari, or how to catch up

The Red Bull RB13 has qualified well off the pace at each of the first two grands prix of 2017, with Max Verstappen 1.297 seconds adrift of Lewis Hamilton's pole time in Australia and Ricciardo 1.355s away in China.

Verstappen and Ricciardo split the Mercedes and Ferrari battle with a three-four result in mixed conditions at Shanghai, but Ricciardo said this could not disguise the fact Red Bull has slipped back compared to last season and has a lot of work to do to catch up.

"We always feel once we get to [races in] Europe, things start to brighten up for us.

"I'd like to say by the time we get to Barcelona [in May] we can get that below a second and then chip away at it.

"We expected to be closer. Right now we're too far away, but we don't have a massive cure yet to say 'by this race, we're going to be on their pace'."

Team boss Christian Horner said during pre-season testing that Red Bull had deliberately opted for an efficient, low-drag aerodynamic concept with the RB13, and reiterated his faith in the potential of that concept after the Chinese Grand Prix.

Ricciardo was non-committal when asked whether Red Bull would need to abandon this concept to make proper progress, but admitted closing the gap would take more than a "quick fix" of conventional aerodynamic upgrades. 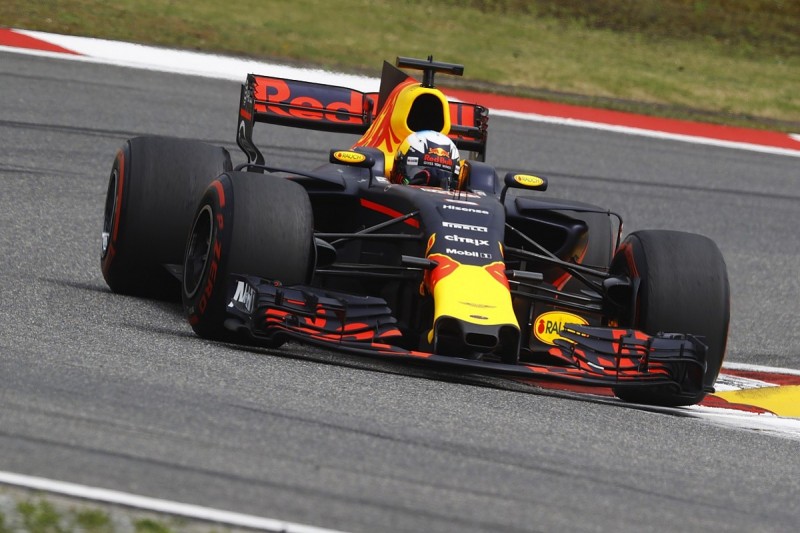 Many expected Red Bull to flourish under 2017's new aerodynamic regulations, given its historic prowess in this area.

Ricciardo cautioned that it has been playing catch-up since the advent of the V6 hybrid turbo engine formula, and that rival teams have negated Red Bull's previous chassis advantages.

"Adrian Newey has a big name sure, but the top teams, Ferrari, Mercedes, everyone has a good department these days," Ricciardo added.

"Our ability to develop is strong, and that's where we were particularly good last year, but it's not a strength not starting on the front foot - that's a weakness.

"Unfortunately, since I've been with the team, we're always playing catch-up from the start of the year."

Team-mate Max Verstappen said Red Bull could "see it coming after winter testing" and is just trying to make the best of things while it works on solutions.

"Of course, you want to be there and challenge for victory, but if it's not possible you just have to deal with it and try to make best of it, and that's what we are doing," he said.