With Verstappen running second to Mercedes' Nico Rosberg at Suzuka, Red Bull brought him in for his second stop on lap 28 of 53, taking another set of the hard-compound tyres for his third and final stint.

Sebastian Vettel stayed out six laps longer, and Ferrari also then elected to give him soft tyres for the end of the race.

However, Vettel had lost track position by staying out and emerged just behind the hard-shod Lewis Hamilton, and despite being on the quicker tyre was unable to find a way past.

Verstappen eventually held off Hamilton to finish second, while Vettel had to settle for fourth.

"We toyed with that [also placing Verstappen on soft] because once you've been undercut then you've got to try something different, so we went longer," said Horner.

"Tyres were dropping off at a point where we really didn't think we would get to the end on the soft. It was then a question of again going on the hard.

"But what really surprised us was Sebastian going onto the soft tyre when he was in a position of reasonable strength around Max with 19 laps to go. That surprised us quite a bit."

Vettel explained Ferrari went for an aggressive strategy in the hope he could attack in the closing stages.

"We tried to go longer and do something different in order to come back at the end of the race," he said.

"Unfortunately, the way it turned out, the soft tyre didn't last very long.

"On top of that, we lost a position to Lewis, but if you look at the gap at the end of the race, I don't think there was anything I could have done to hold him as the gap to the podium was too big." 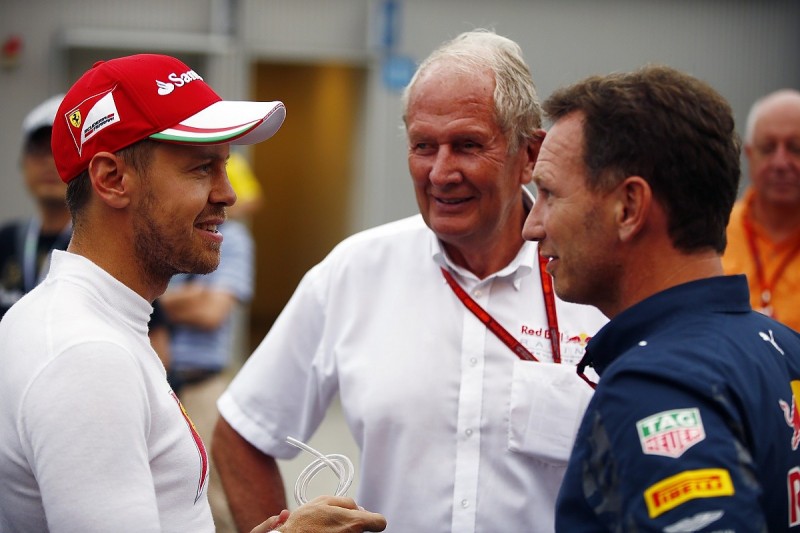 Vettel believes Ferrari has moved back ahead of Red Bull in the F1 pecking order, with Horner admitting its rival had the edge in Japan.

"Pace-wise they were strong, arguably they were slightly stronger than us," said Horner.

"At Suzuka you are at full throttle longer. It is one of the higher engine-dependent circuits, so I was delighted we were able to convert our grid positions into positive points.

"Strategically, we were stronger. We made the most of the position we had with Max.

"[Ferrari] chose a different route, and that in the end assisted Lewis, and the pressure came from Lewis instead of Seb."

Verstappen's team-mate Daniel Ricciardo finished fifth, having complained about a lack of straightline speed from an old power unit during qualifying.

Horner said Red Bull will look into the issues, with both drivers getting a fresh engine - without penalty as it is the last of their allocation - for the next race in Austin, aimed at getting them to the end of the season.