Hamilton made a poor start from the front row of the grid at Monza and dropped down to fifth place after the first lap.

While his Mercedes team-mate Valtteri Bottas controlled the race from the front and took a comfortable win ahead of Max Verstappen, Hamilton found himself trapped behind the McLarens of Daniel Ricciardo and Lando Norris that had started on soft tyres.

Although the world champion was able to get close to Norris ahead of him, he could not get a good enough run down the main straight to find a way past in to the first chicane.

Amid some surprise at Hamilton’s failure to overtake the McLaren, Red Bull team boss Christian Horner has his suspicions about a key Mercedes weakness that has been exposed.

Horner thinks that Hamilton was suffering from his engine derating at the end of straights – which is when it runs out of the extra 160hp boost that is delivered by battery power.

“When they're running sustainably, they're harvesting [regaining energy in to the battery rather than using it] a lot,” Horner told Sky Sports F1.

“It’s what we call clipping, so the end of the straights you see the rear light flashing, and that just kills your straightline speed.

“So you can see Lewis getting within half a second [of Norris], which is usually an overtake, but just running out of momentum at the end of the straight.” 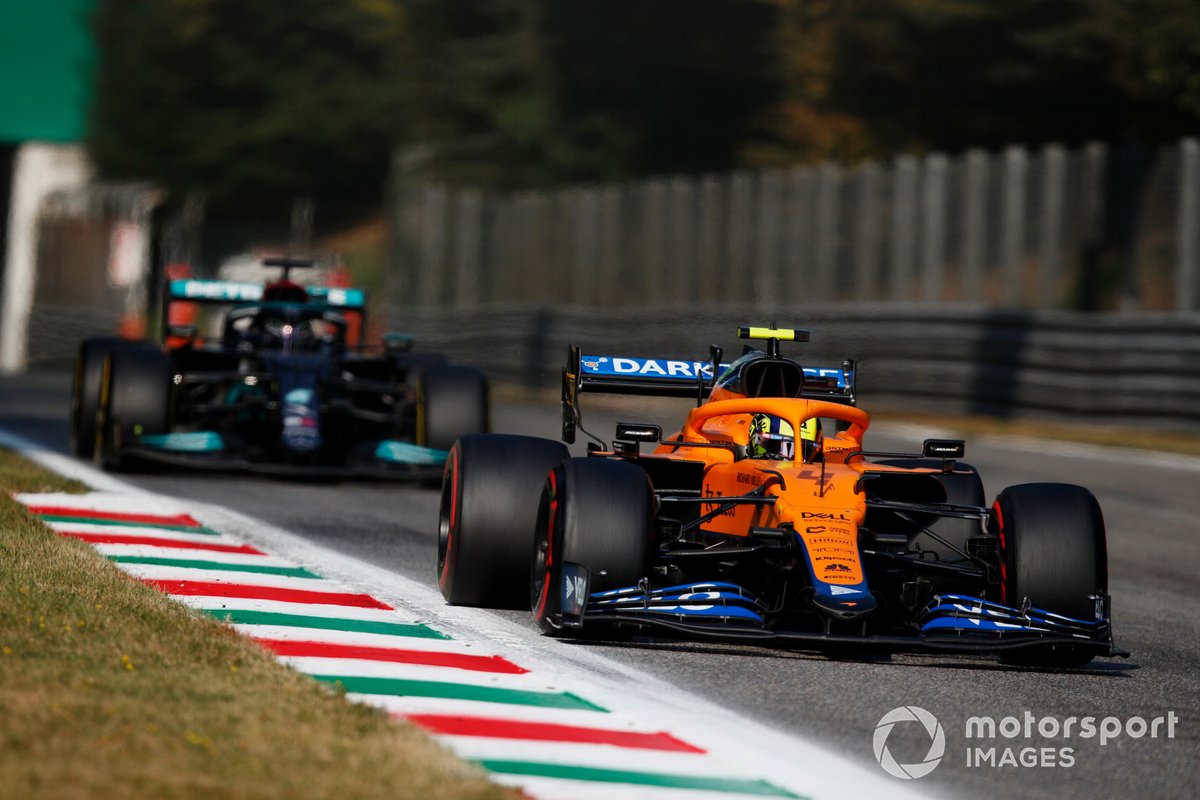 Horner said that if the team’s suspicions are correct, that will be a boost for Red Bull in the race tomorrow, as it means Hamilton will be unable to challenge Verstappen if he needs to.

“It’s good news if we can stay ahead tomorrow,” added Horner. “It means that they won't be able to attack too hard at the end of the straights, because they've got this harvesting going on.”

Horner was clear that the sprint race was pretty much settled by the second chicane, with Hamilton having lost all his positions at the start.

But he says the sprint showed that Red Bull’s race pace was competitive compared to Mercedes.

“I think one lap definitely they are quicker than us,” he said. “I think, actually, there's a couple of corners where we're struggling here, but over a lap we're putting a decent lap together.

“Max in the dirty air was able to run at the same pace as Valtteri, as they moved away from the rest of the field.

“And of course, you don't want to take too much risk in a race like that. So we're just grateful to see the points and start from the front tomorrow.”