Max Verstappen and Daniel Ricciardo were around half a second off the pace in Melbourne, struggling with set-up issues and a lack of power in their Red Bull-Renaults.

Ahead of pre-season testing, the FIA issued a tough clampdown on sophisticated suspension systems that prompted Mercedes and Red Bull to remove concepts they had been evaluating for 2017.

But when it was suggested to Red Bull team boss Christian Horner that this ruling had proved particularly costly for his squad because it had a more sophisticated device, he replied: "I don't believe so.

"The suspension system that was outlawed was something that we looked to develop over the winter.

"And, to be honest with you, even if we had the ability to run it, it wouldn't earn a place on the car because of the weight involved.

"We are running effectively as we've run in previous seasons."

While Ricciardo endured a weekend to forget at his home event - with a crash in qualifying, a pre-race gearbox sensor issue and then a terminal fuel cell problem - Verstappen could manage no better than fifth.

That was a disappointing start to a year in which many had tipped Red Bull to emerge as the main threat to Mercedes. 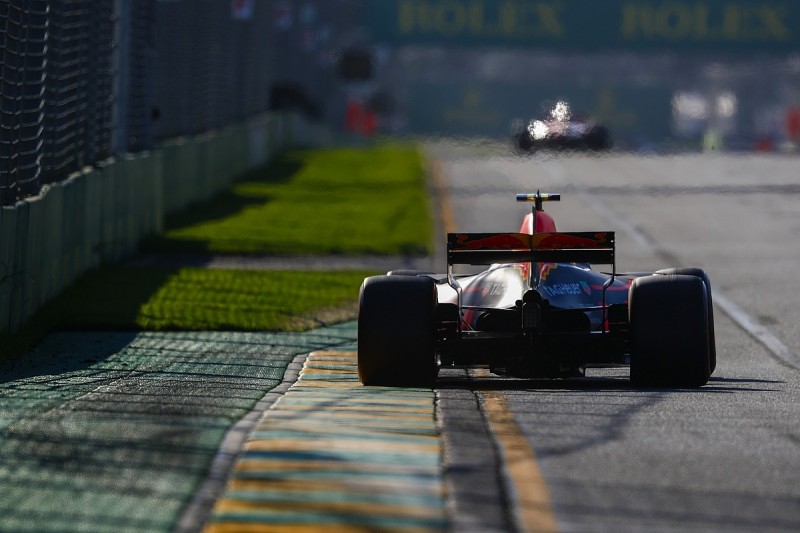 Horner remains hopeful that the margin to the front can be closed down quickly, especially with Renault planning a significant engine update.

"Mercedes weren't that far away - I think probably half a second," he said.

"Ferrari have been very impressive here and probably had the quickest car.

"We definitely had the third quickest car here and we've got to find a good half a second to get into that fight with the cars ahead.

"Max was pushing Kimi [Raikkonen] hard all race, but we didn't have the pace of [Sebastian] Vettel or [Lewis] Hamilton.

"It's still early days. The regulations are still very immature.

"We've chosen a different concept. I believe there's really good development potential in the concept that we have.

"There's a lot of positives to take out of Australia, at a track where we have not been competitive for the last couple of years.

"I'm sure that we can build on this over the coming races."