The Finn's Alfa Romeo car suffered an engine failure towards the end of the evening session, and was brought to a halt with flames pouring out the back.

A radio message from the Alfa Romeo pitwall to Raikkonen urged him to get out of the car as quickly as possible.

"You have a big fire and get the hell out of there quick," said the team radio.

But despite spending some seconds trying to disconnect his radio as he clambered out of the cockpit, Raikkonen played down the drama of the occasion.

"There was nothing scary about it," he said. "It's just a shame that it gets some fire and gets all messed up, trying to put the fire down. It's one of those things."

Asked how much damage the fire had caused, Raikkonen said: "I don't speculate and we will see. For sure there is some damage, hopefully it is mainly bodywork, but we'll see. Obviously it's a different engine and gearbox than we run tomorrow, but yeah, it's just a bit more work for the guys obviously." 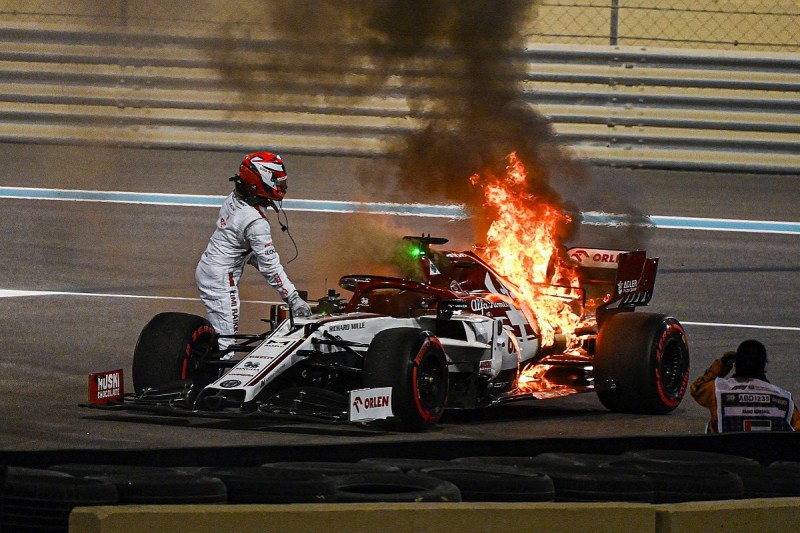 Raikkonen ended the afternoon session in Abu Dhabi in 14th position on the timesheets, but the day was impacted by drivers struggling to get the best out of the softer compound tyres.

But, having stopped early, Raikkonen said his run programme was affected by not being able to complete a high fuel run.

"Things seem to work pretty OK, and obviously the end wasn't great, but we couldn't do many laps on the high fuel runs," he said. "But that's how it ends up.

"I think they [the tyres] were pretty OK. There's always things to improve, but nothing odd."

Although the engine failure was not ideal, teams use power units with an older mileage in Friday free practice sessions - and these now will be getting to the end of their life at the final race of the season.

Raikkonen will have a fresher engine fitted for the remainder of the Abu Dhabi weekend, which will be from his pool so he will not incur a grid penalty.