The Italian manufacturer has conducted a thorough investigation following the incidents involving Mercedes' Nico Rosberg in second practice, and Sebastian Vettel's Ferrari on the penultimate lap of the race.

Pirelli has since presented the FIA with a detailed list of conclusions, with motorsport's world governing body declaring itself "satisfied" with what has been discovered.

As a consequence, and in a bid to avoid further failures with its rubber, Pirelli has raised tyre pressure and camber limits ahead of this weekend's Italian Grand Prix at Monza.

In a statement issued by Pirelli, the organisation has confirmed "the absence of any structural problems".

It added: "Since the start of 2015, 13,748 slick tyres have been used, including on especially severe tracks like Sepang, Barcelona and Silverstone.

"No problems have ever been discovered, underlining the fundamental solidity of the product."

Of particular significance is that Pirelli found "63 cuts...in the tread of the Formula 1 tyres used over the course of the Spa weekend following numerous incidents that took place during the support races before the grand prix.

"In the previous 15 events (10 races and five test sessions) an average of only 1.2 cuts per event were noted.

"All this indicates an anomalous amount of detritus on the track in Spa, with a consequent increased risk of encountering a foreign object.

"If even a small piece of debris - made of carbon or any other particularly sharp material - penetrates and cuts the various structural parts of a tyre (which is obviously subject to high-speed use, and more susceptible if used for a prolonged period) without penetrating the actual structure, this can cause a failure that is different to that found in the event of a normal puncture, which is characterised by a loss of tyre pressure.

"The former was the type of event seen on Sebastian Vettel's tyre at Spa."

Pirelli added that following qualifying at Spa, noting "the exceptional number of cuts to the tyres", it asked the FIA for the circuit to be cleaned.

It is now proposing, in conjunction with the FIA, "a study to evaluate the way in which circuits can be cleaned most effectively".

As for the FIA, it noted: "A highly unusual number of cuts were reported by Pirelli engineers during the Spa weekend, one of which reached the belt and caused tyre failure on Nico Rosberg's car.

"Microscopic examination was conducted on sections taken through some of the cuts found in tyres used by different teams in the race, the results showed one case where the cut had reached the belt but without causing failure.

"The remaining tread thickness on Sebastian Vettel's rear tyres was approximately 30 per cent at the time of the failure, making the tyre more susceptible to damage from small pieces of debris."

In conclusion, the FIA said it "is satisfied with the thoroughness of the investigation and Pirelli's conclusions as to the reasons for the tyre failures in Belgium.

"Based on this, the FIA is willing to consider any safety recommendations made by the tyre supplier for the Italian GP and for the remainder of the season." 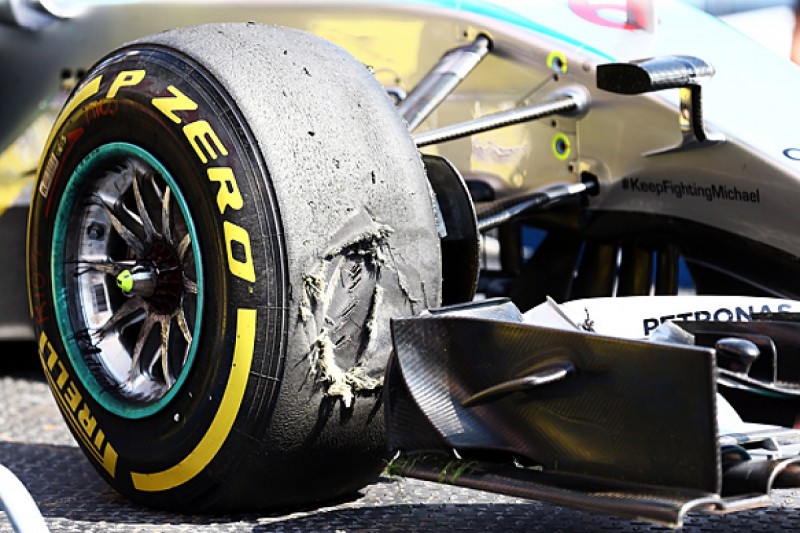