Sergio Perez says there is no reason his form throughout the Azerbaijan Grand Prix Formula 1 weekend cannot carry over to other tracks after his breakthrough victory for Red Bull.

Perez scored his second F1 win on Sunday in Baku after team-mate Max Verstappen suffered a late tyre failure while heading up a 1-2 for Red Bull.

Perez had displayed impressive pace throughout the race weekend in Baku, leading FP2 and finishing second in FP3 before traffic in Q3 left him sixth on the grid.

He was then able to fight his way through to second place in the race, jumping Lewis Hamilton in the pits and coming close to also overcutting Verstappen.

The all-round performance marked a new high for Perez with Red Bull after taking time to get up to speed with the team's RB16B car.

Perez explained after the race that he saw no reason why his form could not carry over to the upcoming circuits as he continues to settle in with Red Bull.

"It certainly feels that I've made good progress, not just this weekend, also in Monaco," Perez said.

"Every weekend, the understanding grows and after each weekend we do a very deep analysis. We do a lot of work back in the factory to try to figure out what we can do better as a team.

"But yes, certainly I think we are getting there. We are improving and I see no reason why going to a different track we cannot be able to have a similar kind of performance.

"Definitely my confidence is growing. The understanding with the team is getting there. It's only race number six of the season, there's still plenty to go.

"But it's important to keep this momentum and to keep improving, race after race." 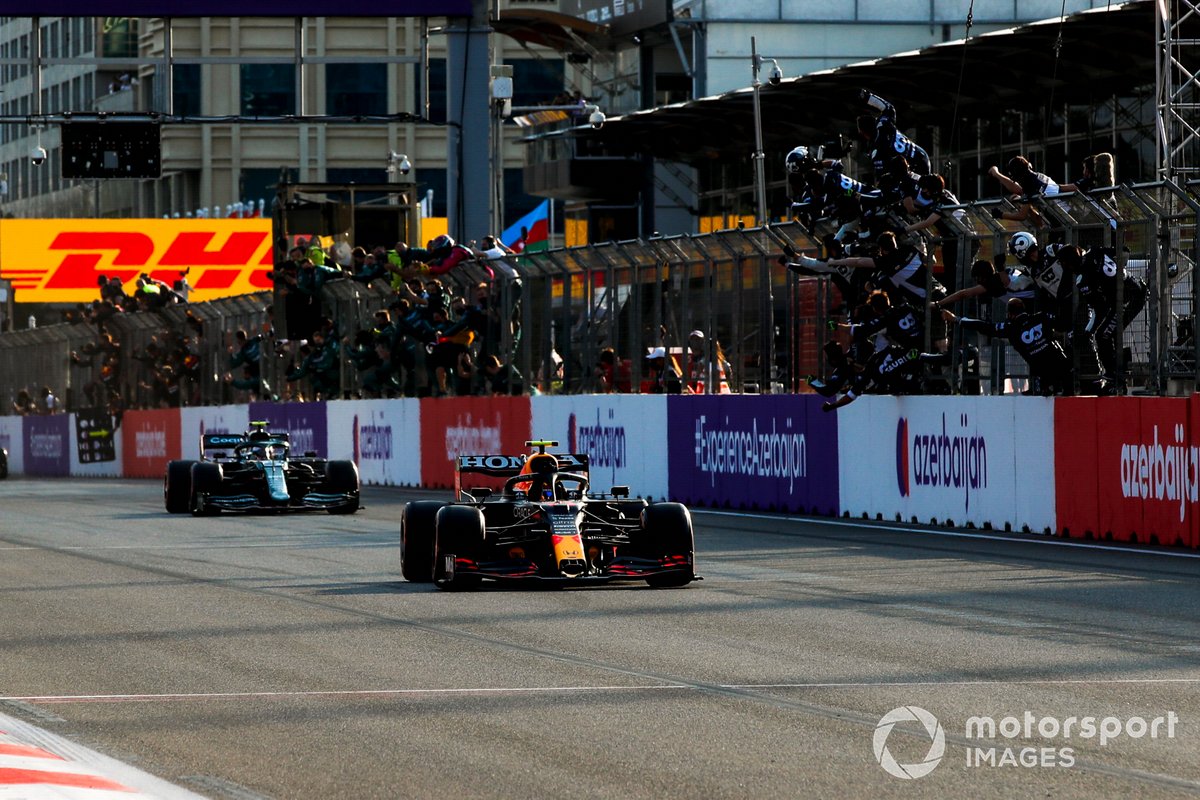 Sergio Perez, Red Bull Racing RB16B, 1st position, takes the chequered flag to the delight of his team on the pit wall

Perez became the fifth driver to win a race for Red Bull, and the team's first new winner since Verstappen's victory on debut in 2016.

The Mexican predicted at the start of the year it would take him around five or six races to get up to speed with Red Bull, but admitted after his win he had found it harder than expected to adjust to the car.

"We didn't have the start of the season we were hoping for," Perez conceded.

"I found my adaptation harder than expected, but we have been working extremely hard since day one with the engineers back at the factory.

"Finally we got a very good result for the team. We have been showing flashes of speed here and there. But I think [in Baku] everything was looking great until Q3 run one when we got it wrong. But we didn't let ourselves [get] down. We looked forward and we had a tremendous race.

"I'm extremely pleased with the result. This definitely gives a big boost of confidence to myself and also to my team, to my side of the garage. We have such a rollercoaster through the seasons, it's important to enjoy these moments."