As the field bunched up through Turns 1 and 2, Gutierrez locked up and hit Wehrlein, pitching the Manor into Marcus Ericsson's Sauber and breaking the German's suspension.

"He braked just too late," said Wehrlein, who reviewed the footage before judging the incident.

"He was already crashing into the McLaren in front of him, he was locking up his tyres and yeah, he touched me.

"There was a car inside of him, which I saw on a replay but it is not a corner where three cars can go around - that's it.

"There was no chance for him to overtake me, so it was even risking his race.

"In the midfield, there can always be a situation where something happens but this one was avoidable."

Gutierrez escaped penalty but when asked if he thought that was fair, Wehrlein said: "I don't know, it's not my decision. My race was over after that.

"It's disappointing for me and the team because we did a great job this weekend."

Gutierrez, who was able to continue and ultimately finished 19th, did not believe he was at fault.

"I wouldn't be happy if I was out of the race, but there was no way I could avoid the contact," he said. 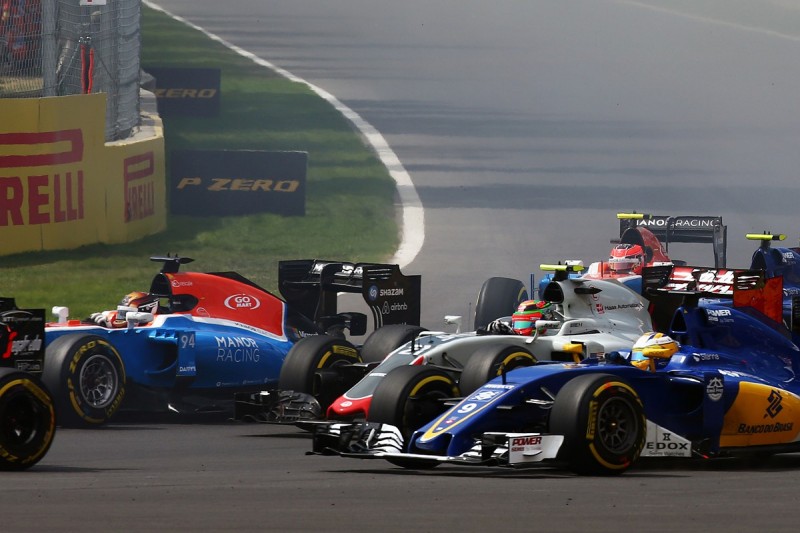 "I had a Sauber on the left and he [Wehrlein] was on the right, and it was like being squeezed in between two cars.

"I understand that he pissed off because of his race and if I was in this position I would do the same.

"But he cannot be upset with me because I had absolutely nothing to do there."

When it was put to him that Wehrlein felt he braked too late, Gutierrez replied: "No."

Ericsson, who got going again after the contact and recovered to finish just outside the points in 11th, believes it was a racing incident.

"One car jumped at me and hit me," said the Sauber driver.

"It's one of those things. I haven't seen it but it felt like a racing incident."