Esteban Ocon says that his battle with Alpine Formula 1 team-mate Fernando Alonso and others in the Saudi Arabian Grand Prix was “like a go-kart” race.

Ocon started two places ahead of Alonso in fifth, but having dropped behind Mercedes' George Russell, he had to fend off the Spaniard, the pair trading places several times in the early laps of the race.

Alonso eventually gained the upper hand, while Ocon lost a place to Valtteri Bottas, who along with Kevin Magnussen, had been able to join the fight as the Alpine drivers held each other up.

Alonso eventually retired with a yet-to-be determined loss of drive, while Ocon held on to sixth place after a late battle with Lando Norris that was resolved only on the final straight.

Alpine had made it clear to its drivers that as in Bahrain they would be allowed to race each other.

“It was a lot of fun,” said Ocon when asked about his eventful evening.

“And fighting with Fernando very closely, we were very close in all sessions this weekend, in qualifying, there was less than a tenth separating us.

"So it's going to be close all year. But that's pushing the team performance up.”

Regarding their personal battle allowing rivals to catch up, Ocon said: “I think of course when you fight, same as in go-karts, you lose time, it's normal.

“But at the time in a one-stop race, track position is quite important. And we were allowed to race by the team. It's always a privilege to race Fernando. It makes me smile.

“He's great on race craft, we know that, he's extremely fast. And the legend himself, fighting, it's always a privilege. It's good that we race so close. And it's good that we can push the team forward.

“I think he didn't lose any speed also from when he was fighting with Lewis [Hamilton] back in 2007, I think. He's like a good wine, he matured with age!” 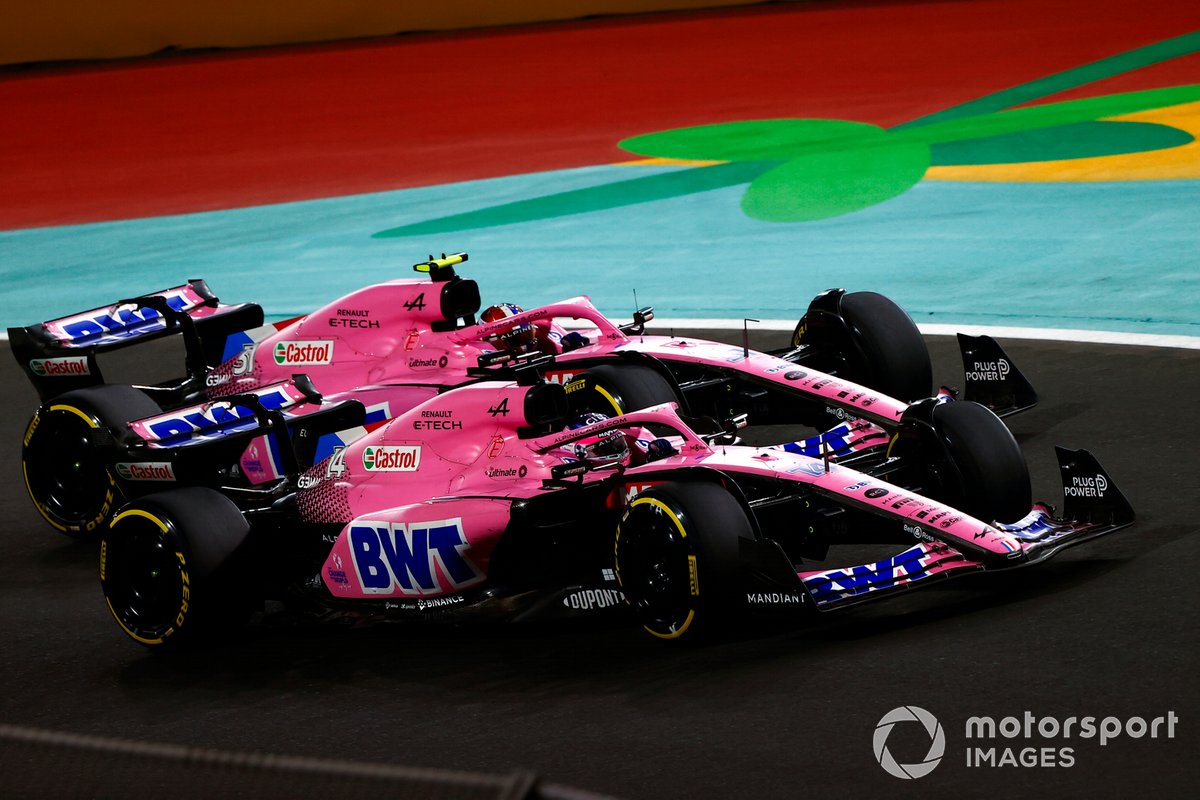 Alonso stressed that he was well aware that he had to be careful while fighting his teammate, even if their battle looked a little marginal at times.

“We know that before we start that we can race, but never touch each other. So we never do," he said.

“Of course you need to give extra margin, but everything was fine. We battled in Bahrain already in the first stint, even though we had different strategies there.

“Here we had the same strategy, but for whatever reason my car felt faster this weekend in qualifying and the race, so I could overtake and pull away a little bit.

“And then with Kevin we had a good battle as well, Bottas was very fast, so we had to defend quite strong with Bottas. So yeah, good fights. I think this track obviously with the three consecutive DRS zones gives you that chance.

“I felt that my car was in the window, working a little bit better today, so I had the opportunity to overtake and pull away a little bit.

"And the main threat as I said was Bottas. He was fast today, and it was not easy to keep him behind.”

Ocon meanwhile was involved in a last lap battle in Jeddah for a second year in a row, but having lost third place in the final metres of the race in 2021 he managed to keep Norris behind this time.

"I have good knowledge from last year, which probably saved me from this year,” he said.

“So he overtook me obviously a lap before the end. And this time, I managed to get him back in the last lap.

"I knew how to manage my battery in comparison to last year. And we managed to keep it under control this time."

Leclerc: F1 2022 races would be "very boring" without DRS