Lando Norris says he and McLaren will have to reflect on its strategy at Formula 1's Monaco Grand Prix, after expressing his frustration in radio calls.

Following Norris' first stop for intermediate tyres, he made a second for hard-compound slicks but was overtaken by George Russell in the latter instance as the Mercedes driver stopped a lap earlier.

After the red flag for the Mick Schumacher crash Norris resumed the race with the same hard tyres still fitted, a choice also made by Ferrari. However many others went for new mediums, including Russell ahead and the cars immediately behind him.

Norris stayed in sixth place for the remainder of the race, and at some points was engaged in a debate with his engineer about how much he was allowed to push, with the team believing that he should preserve his tyres in case a late shower made the track slippery.

Having been told that Fernando Alonso was backing up the pack behind him Norris said: “I’m obviously under no threat from behind, right? So surely I can just push now and try and make him make a mistake ahead? If you don’t want me to push what the hell am I meant to do, just sit here?”

He was subsequently told that he could push but “the key thing would be if rain came towards the end that we had some rubber left on the tyre to deal with it.”

In the latter stages the frustrated Norris asked for a switch to medium tyres, given that he would not lose a place to Alonso.

The team agreed to call him in on lap 51, a move that enabled him to bag fastest lap with the fresh rubber after he'd asked the team if he was allowed to go for the extra point.

He eventually finished right on Russell's tail, having made huge gains on his new tyres.

“It was a good race,” Norris said after the flag. “Although we lost one position to the Merc that happens sometimes in these conditions. You can take your risk of going one lap earlier. But it is a risk, sometimes you'll lose from it, sometimes you gain, and today they gained. 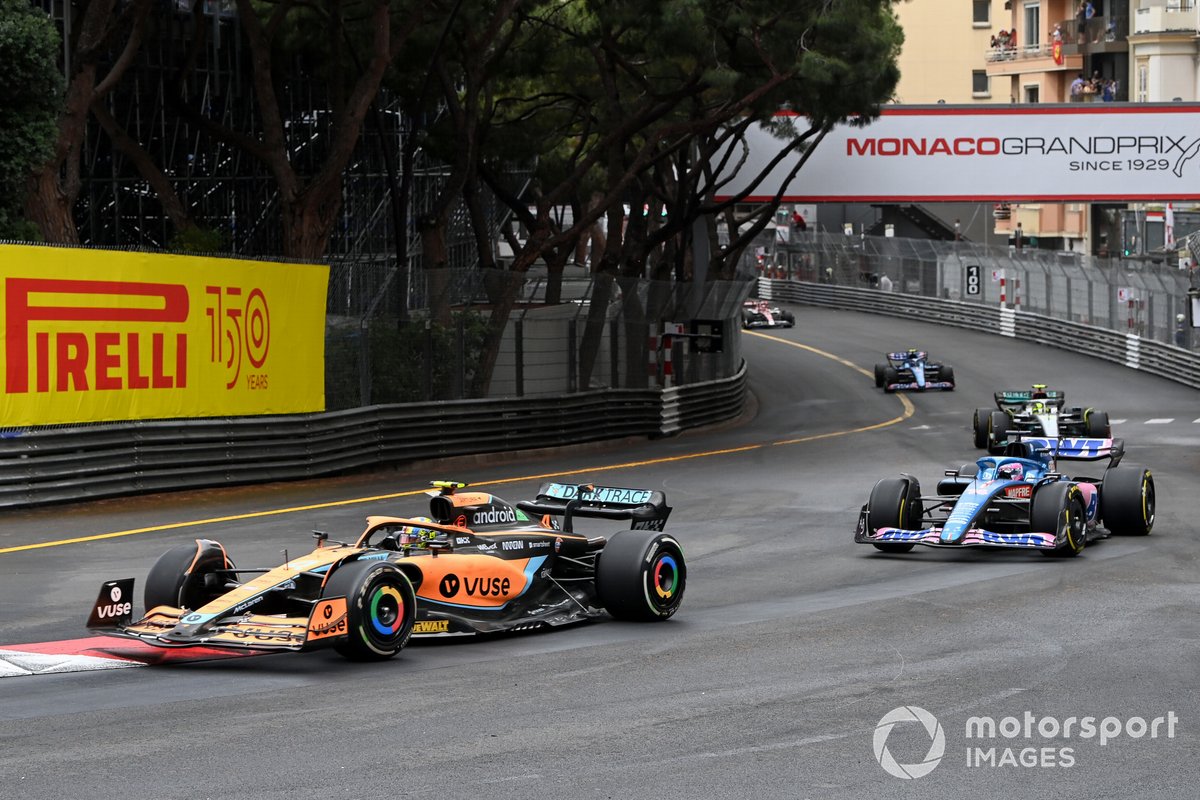 “So, fair play to them, George did a good job as well. But we sort of made the most of it otherwise, with the fastest lap and the pace at the end.

“I think we may be lacking a little bit of race pace in the tyre preservation and things, I don't think we're in the best position with all of this. But apart from that a good race, good points, which I'm happy with.”

Asked by Autosport about the frustration he’d expressed in his radio calls he admitted that he’d have to discuss it with the team.

“There's things we'll talk about, about the strategy, I don't think we did a perfect job," he noted.

"And of course, there's always things to work on and improve on. Something for us to talk about back behind the scenes, and back in MTC, and not something to talk about now. But yeah, things to definitely improve on from that side.”

"There's a lot of things to think about in Monaco in these conditions, it's just never an easy thing. And we're in a good position, and we have good points, we don't want to risk too much. And it's easy to go that way.

“And it's hard to describe that and say that in an easy way. But they normally do a very good job. So I'm not complaining, it's just we've got a bit of work to do.”