McLaren Formula 1 driver Lando Norris says he expected Ferrari to be as quick as it is in Monaco after the Scuderia topped Thursday's second practice session.

Despite sitting out most of Thursday morning's first free practice session with gearbox issues, Charles Leclerc topped the second session at the Monaco Grand Prix, holding off Carlos Sainz for a Ferrari 1-2.

Observers expected Ferrari to be strong in Monaco as its SF21 proved to be very competitive through Barcelona's slow final sector at the Spanish Grand Prix earlier this month, which often provides a good indication of Monaco pace.

Ferrari came good on that early promise on Thursday, with Leclerc topping FP2 with a lap of 1m11.684s, one tenth quicker than teammate Sainz and nearly four tenths up on title rivals Lewis Hamilton and Max Verstappen.

While Leclerc said his practice pace seemed too good to be true, Sainz acknowledged after the session that Ferrari "definitely look very close to being a genuine threat".

"After Spain? Yes, for sure," Norris said.

"They were very quick in the final chicane and you always have corners that you know are like Monaco and things like that.

Norris revealed he even texted Sainz earlier in the week, backing the Spaniard to have a chance at winning the Monaco Grand Prix. 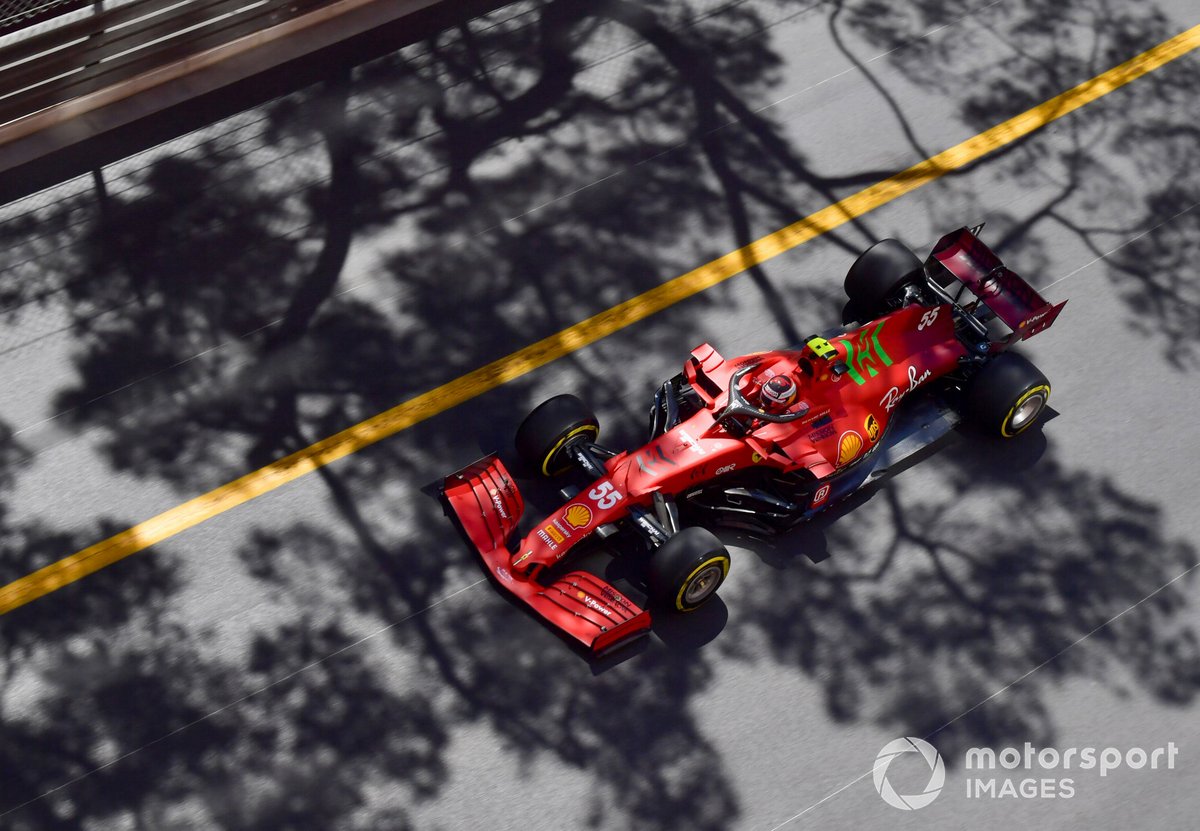 "I texted Carlos before the weekend saying I think he has a good chance of winning," he added.

"I think from our side it's expected, maybe not from the outside or from the viewers, but we know where they are quick, where they're not and this track suits them very well, so not a surprise.

A big points weekend for Ferrari could swing the balance in the constructors' championship, with Ferrari and McLaren embroiled in a fierce battle for third which the Woking outfit currently leads by five points.

Norris, who finished second free practice in sixth, said he was hopeful McLaren could be closer on Saturday, but admitted there was a "realistic gap" to the cars ahead.

"If you look ahead to other tracks I'm sure we can get [Ferrari] back some places but they're looking strong," Norris explained.

"I think we're a realistic gap away from the guys ahead of us, but the car is good and we've got some things to improve on. So I'm pretty hopeful.

Norris' teammate Ricciardo endured a much more difficult Thursday and admitted he was "a long way off" after ending the day down in 15th.

"I felt like I had confidence, it was just not translating to laptime," he said.

"Honestly, it was from behind the wheel quite frustrating because I'd cross the line, I'd be like 'yeah, probably a decent lap' and it was like: 'You're P12 or P15', or even at one stage P17.

"So, frustrating, because it's a long way off actually, there's a lot of time to find. Luckily we've got [Friday] off, but right now it's like trying to figure out where all the time is.

"I won't lie, [the car] is very sensitive. That's probably been the frustrating thing. It feels like it does require a certain style to drive it and if you don't do that and get it right, it just like today isn't fast.

"So, it's a little bit just still trying to get my head around it."