Norris "could have gotten Leclerc" for Imola F1 front row

McLaren Formula 1 driver Lando Norris believes he could have taken second from Charles Leclerc in a dramatic qualifying session in Imola but was still happy to qualify an unlikely third.

Norris, whose McLaren team had struggled for pace in the opening rounds of 2022, grabbed the opportunity Imola's capricious weather conditions provided with both hands.

After advancing to Q3 in a stop-start Q2, in which the rain that plagued practice returned, Norris found himself third on the provisional grid for Saturday's sprint at the Emilia Romagna Grand Prix.

In the rain-soaked top 10 shootout Norris' early timed lap was again good enough for third, and due to two red flags, one for Valtteri Bottas' stricken Alfa Romeo and one for a late off by Norris himself, nobody else had the chance to clock a better lap time.

That means Norris will start Saturday's 21-lap sprint from his best grid position this season, but the Briton thinks he could have even snatched a front-row start off championship leader Charles Leclerc because his first banker lap was far from ideal.

"Yeah, I would have liked to have that last lap in because we didn't do a lap where we were like full power, full battery," he told Sky Sports F1.

"But the beginning of Q3 was like a two consecutive [laps] and when you do two consecutives, you have to kind of split the battery 50/50. If I managed to get a lap at the end which was 100% battery, there was a good three, four tenths left in it.

"I'm sure Charles would have improved as well but if he made a mistake and I didn't then I could have gotten him, so you know, there was maybe a little chance to do even better and to score a second place today. But it didn't happen because of the mistake I made in the end, so I have to be happy enough with third and honestly, it is a very good result for us." 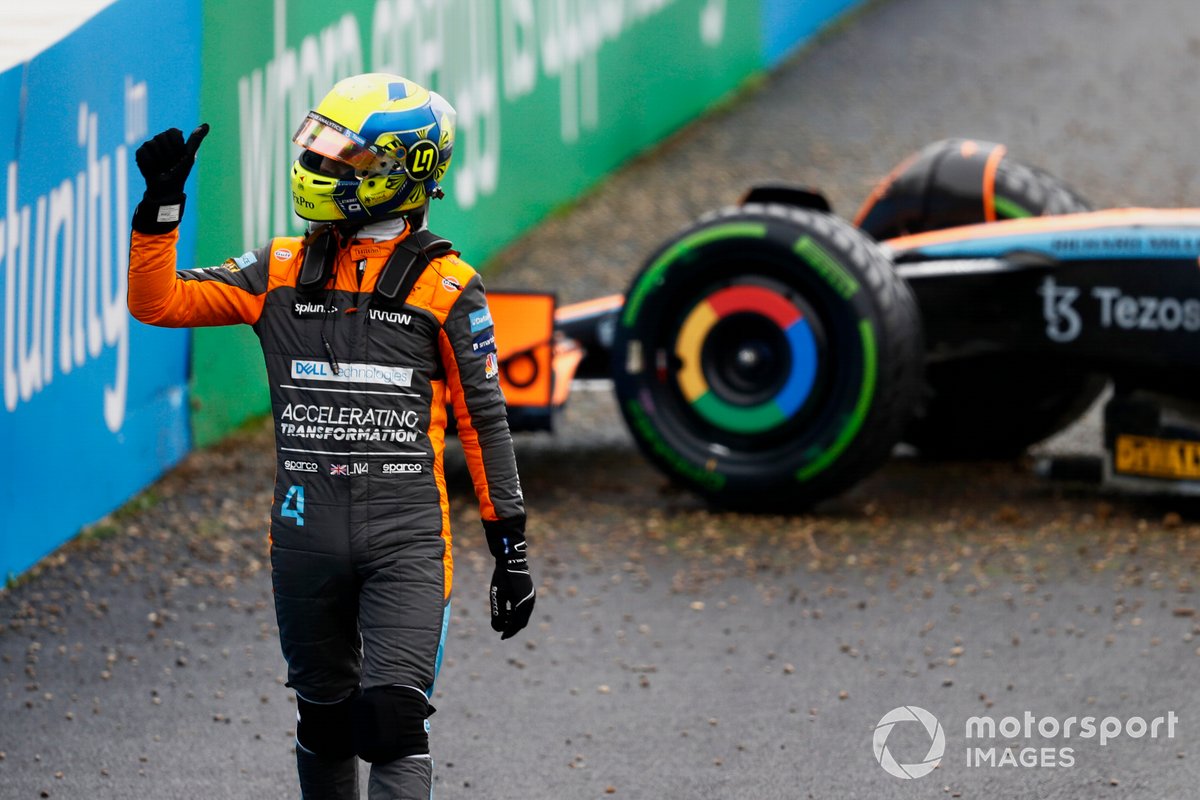 Lando Norris, McLaren, walks away from his car after crashing out at the end of Qualifying

With team-mate Daniel Ricciardo qualifying in sixth, Norris acknowledged McLaren would have started further back in more predictable, dry conditions. While the Woking squad did introduce incremental updates to its MCL36, Norris said his team is still "way off" the leading Ferrari and Red Bull teams.

"We have some small upgrades this weekend. Small things, nothing which has made us go from where we were to P3, you know, we're still a long way off the Ferraris and the Red Bulls," he explained.

"We saw this morning when the conditions are consistent, we were a bit more in our place where we should be, which is a bit further back.

"When it's a bit more down to the driver, taking the risks and pushing the tyres and finding the limits in wet-dry, dry-wet conditions, that's where I've done a good job today, so I think I just need to be happy with myself and the job I've done."