Mercedes wrapped up its third consecutive constructors' title in Japan, yet it has not been as dominant a performance this season compared to 2014 and '15.

While the gap to its rivals remains considerable, Wolff feels the point is being made his team is being reeled in and would likely be even more vulnerable next year if the rules remained unaltered.

"In terms of our performances, it's not as dominant a season like it was last year, and for me it's just a fact of diminishing returns with the stable regulations," said Wolff.

"It's what we always said - just leave the regulations alone, leave the rules alone, and the performance gap will shrink and eventually we are going to have some good racing.

"But then somebody else decided to invent something new for next year and it's back to square one."

ANALYSIS: IS MERCEDES REALLY BEING CAUGHT?

Although Mercedes has secured pole position in 16 of the 17 races this season, it has only managed 10 front-row lockouts, compared to 13 at the same stage last year. 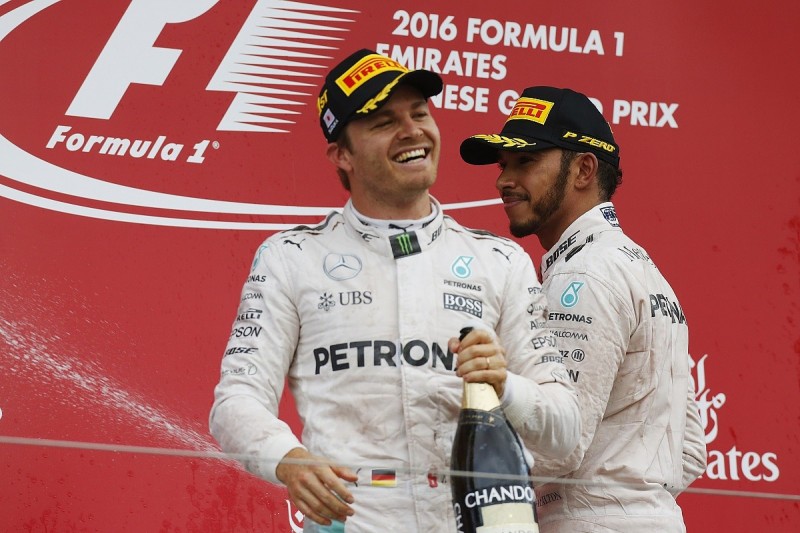 With the team title wrapped up, all that remains now is for either Nico Rosberg or Lewis Hamilton to clinch a third successive drivers' crown for the team.

Wolff is adamant there will be no change to how they can compete against one another over the closing four grand prix of the campaign.

With the primary goal obtained as far as Wolff is concerned, he said: "We let them race, we haven't changed that.

"If we started to tweak certain details it would open up a can of worms. We have worked on the principle [of letting them race] for three years and it functions well.

"We have never had any team orders which are not popular with fans, and it's not what we want either. So there will be no change, they are free to race."

Despite the uphill task now being faced by Hamilton, as he trails Rosberg by 33 points, Wolff is adamant he will hit back.

"Thirty-three points is a lot, but you saw in Malaysia how quickly it can go [with Hamilton's engine blowing up when leading]," added Wolff.

"If you retire and the other guy wins it's 25 points lost, and that would mean the gap is down to eight.

"Lewis functions best when he is under pressure and he has a target. I have no doubt this will be an intense fight to the end."