The duo had set the pace early in the session when on medium-compound Pirellis, but Ferrari driver Sebastian Vettel took top spot on his performance run on what was his second set of softs by 45 thousandths of a second.

Mercedes was one of the last teams to send its drivers out for quick runs on softs, with Bottas the first to reclaim first position with a lap of 1m11.597s.

Bottas put in a 1m11.199s to move back ahead, while Hamilton paid a visit to the Ste Devote escape road after a lock-up.

But Hamilton, on his 10th lap on softs, was able to put in a time 0.081s quicker than Bottas's best, which proved to be good enough to top the session.

Vettel, who locked up at Ste Devote with 17 minutes to go and, after just stopping short of the barrier, had to reverse to recover, held on to third place - 0.763s down.

Pierre Gasly was fourth fastest for Red Bull, less than a tenth behind Vettel, with Toro Rosso driver Alex Albon fifth on his debut Monaco F1 weekend with a lap of 1m12.031s set with 54 minutes of the session to go. 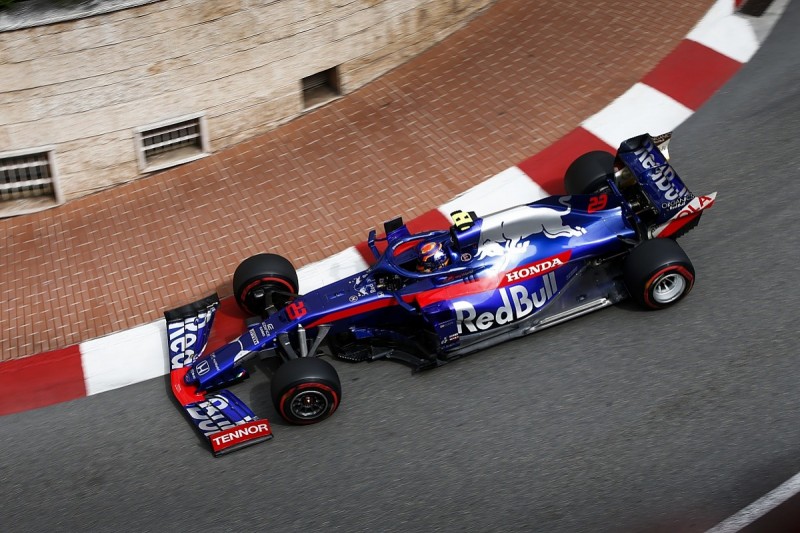 Max Verstappen looked quick, but sat out a large amount of the session after suffering a suspected water leak on his Red Bull - ending up 0.934s with his pace on a first set of softs.

He returned to the track in the closing stages and completed a further seven laps, but did not improve on his earlier time.

Haas driver Kevin Magnussen was best of the rest in seventh fastest, 1.056s off the pace, which put him just ahead of the Alfa Romeos of Antonio Giovinazzi and Kimi Raikkonen.

Charles Leclerc, in the second Ferrari, was 10th and 1.232s down having complained about braking problems during the session.

Haas driver Romain Grosjean was 11th ahead of the McLarens of Lando Norris and Carlos Sainz Jr.

Daniil Kvyat lost time in the final sector on his best lap and ended up 14th, 1.459s down and just ahead of the Racing Point of Sergio Perez.

After a promising first practice session, the Renaults were down in 16th and 17th place, with Nico Hulkenberg the quicker by 0.016s.

That put them ahead of Lance Stroll, who was 3.440s down, and Williams pairing George Russell - who was another to visit the Ste Devote escape road - and Robert Kubica.