Carlos Sainz finished third ahead of a hobbled Sergio Perez, with George Russell coming fifth ahead of Lewis Hamilton after gaining massively with the safety car timing and then beating his team-mate in battle afterwards.

At the start, Leclerc shot away from pole position in the lead, while alongside his team-mate Sainz could not make a similarly quick getaway from away from the racing line on the right-hand side of the track.

That meant Verstappen was able to quickly get alongside the second Ferrari and the Dutchman went wheel-to-wheel with Sainz through the first corner before passing with a forceful move in to the second corner sweep through which they were soon blasting.

Leclerc had a 0.8s lead at the end of the first lap of 57 and quickly moved to pull clear of Verstappen’s DRS range by the time it was activated on the third lap.

For the opening phase of the race, Leclerc would gain three to four tenths each time through the first sector before Verstappen’s superior top speed brought him back towards the Ferrari along the long straights in the second two thirds of the circuit.

Leclerc’s lead reached a maximum of 1.4s at the start of lap six, just as he had set a then fastest lap in the high 1m33s, but soon after this a dark band of rubber appeared on his right front tyre.

Verstappen, informed his rival was struggling to preserve the mediums tyres all the leaders had started on, then began to edge back towards the Ferrari. 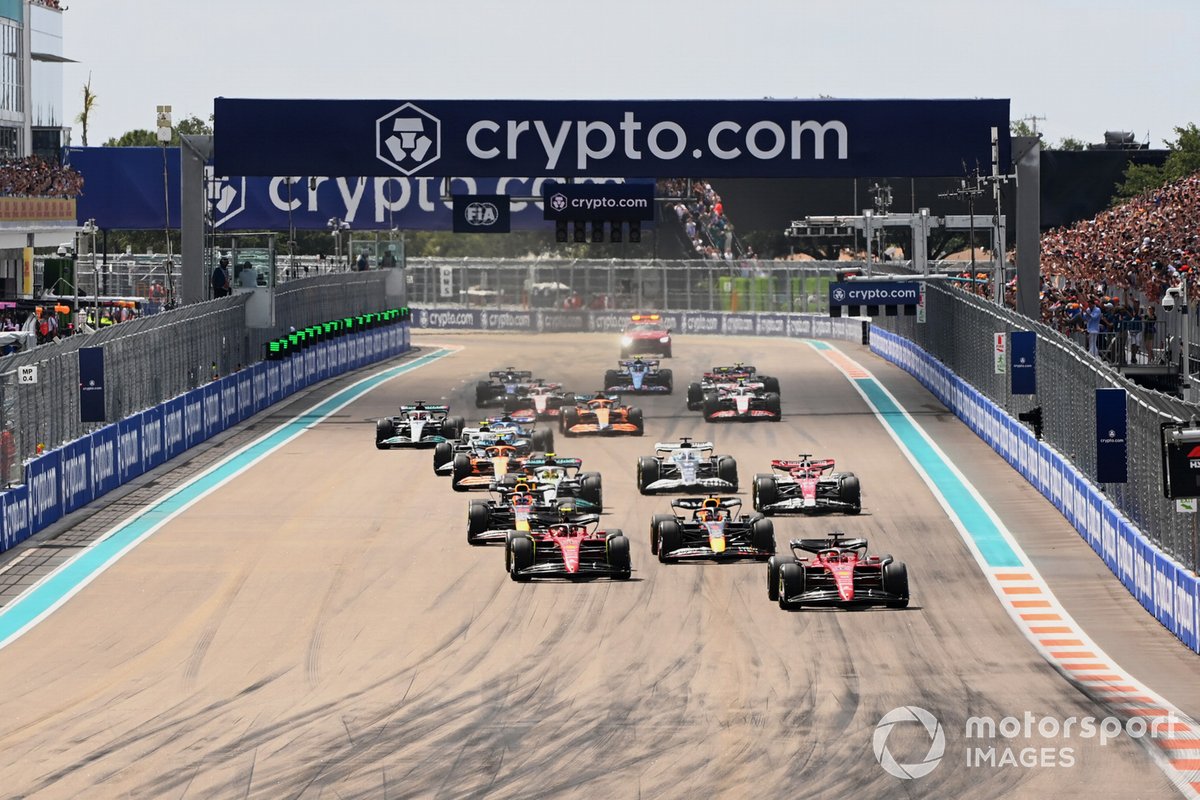 At the end of lap eight, Leclerc slid exiting the Turn 17 hairpin and Verstappen arrived right on his gearbox – moving alongside as they ran down the pit straight and then taking the lead with a simple pass into Turn 1, Leclerc opting not to fight too hard.

On the next tour, Leclerc pushed hard to keep up through the first sector that favour’s Ferrari’s higher downforce package, but was dropped as Verstappen ran down every subsequent straight and was out of DRS threat after two laps.

The Red Bull was steadily able to build a lead, aided by Leclerc locking up and sliding deep at Turn 17 on lap 12, which cost him a second and meant at the end of that tour Verstappen’s lead had reached 2.6s.

That was 4.2s by lap 21 – Leclerc being told Ferrari was moving to its “Plan D” strategy, while Red Bull informed Verstappen his right front tyre management was making the key difference.

Behind the leaders, Sainz had soon fallen back, with Perez initially following him closely before losing over five seconds as his engine developed an issue that Red Bull had to issue a steering wheel setting fix to correct.

Leclerc was able to set competitive times at this stage, but could not do so consistently and with Verstappen able to cover him off each time anyway, so Ferrari called him in to switch to the hards at the end of lap 24 – just after he had reported his car was “so difficult to drive”.

Red Bull left Verstappen out for two more laps before he was switched on the hards, gaining another 0.8s with a quicker service from his mechanics compared to those working on Leclerc’s car earlier. 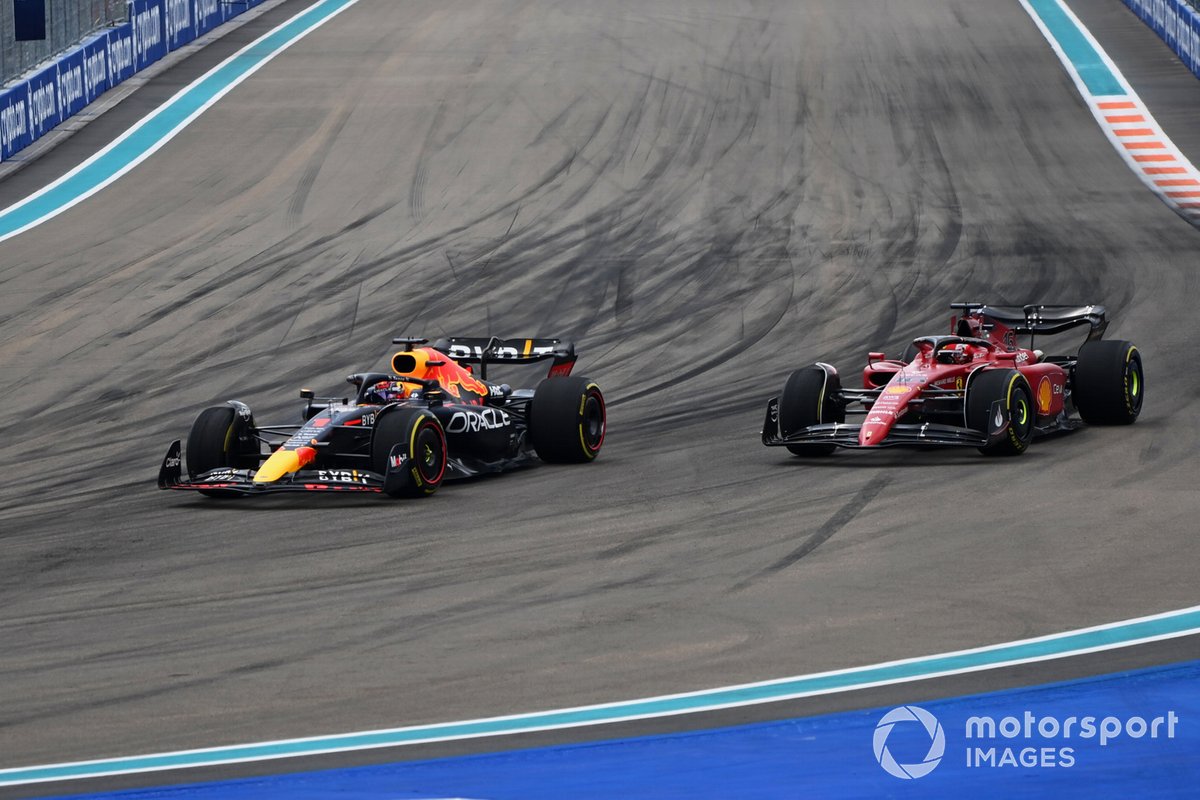 Verstappen led by 7.5s at the start of the second stint, which Leclerc initially cut with a series of fastest laps into the high 1m32s, before the lead responded with an even quicker best time and restore and then maintain his advantage.

Much like at the start of the race, Leclerc regularly gained several tenths through the twisty first sector before Verstappen took back time later in the lap – the pair trading fastest laps but the gap between then staying stable.

Heading into the final third, Verstappen led by 7.8s, with Red Bull seemingly only concerned about a threat of rain, as clouds built up above the Miami Gardens track.

But a serene had no chance to play out after the safety car was called out on lap 41 after Pierre Gasly and Lando Norris collided – putting the McLaren driver out just past the start of the long, meandering acceleration zone that follows the fake marina at Turn 8.

Gasly was touring slowly having just had an earlier collision with Fernando Alonso at Turn 1 as they fought in the lower reaches of the top 10 and when the AlphaTauri ran wide through Turn 8 Norris moved to overtake on its right-hand side.

But Gasly appeared to drift left, unaware Norris was coming by, reporting his “car doesn’t turn” with a problem, and the contact spun Norris around and knocked off his right-rear, after which the race was neutralised for five laps, during which Perez pitted from fourth to go back to the hards.

At the restart, Verstappen easily pulled clear of Leclerc, while Perez pressured Sainz heavily onto the pit straight but was rebuffed on the outside line into Turn 1. 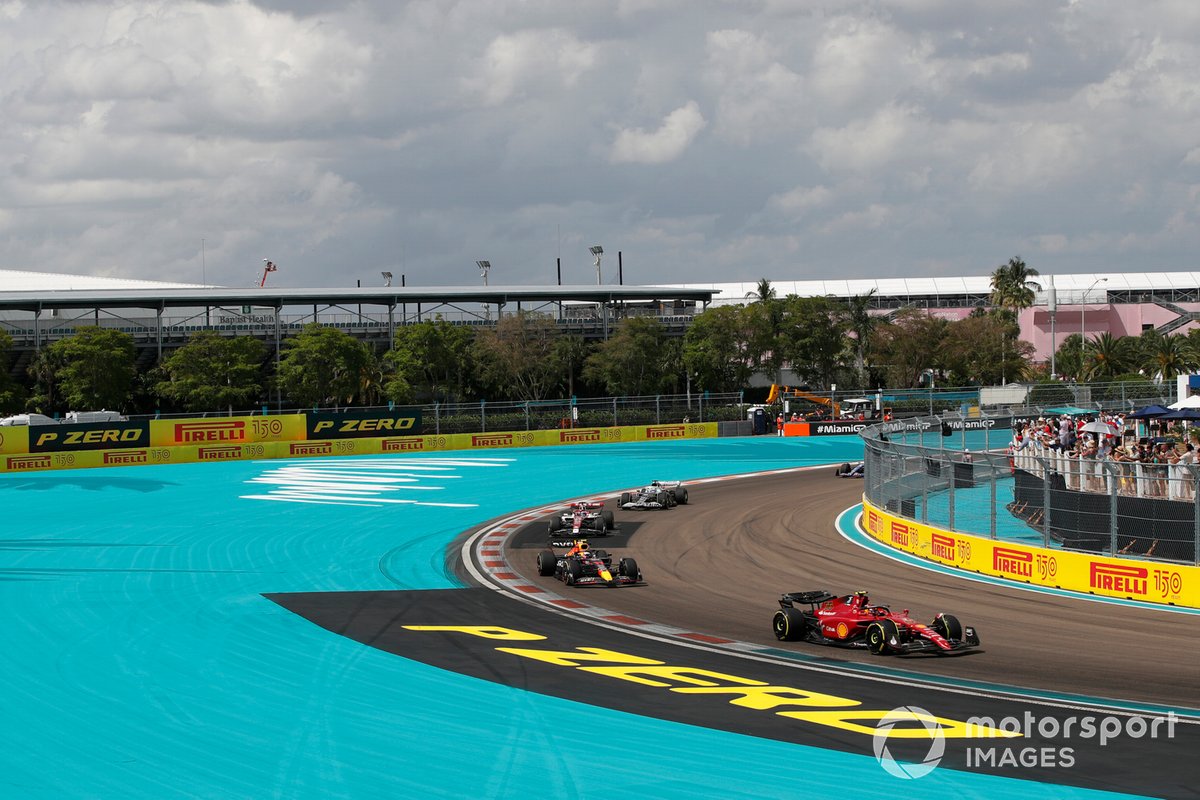 There followed a thrilling 11-lap sprint to the finish, with Leclerc able to stay within DRS threat for much of the remaining action and putting Verstappen under severe pressure.

Leclerc came closest to making a pass with a look to the inside of Turn 11 at the end of the long, curving run from the ‘marina’, but was pinched on the inside line and lost ground – never getting alongside the leader.

He closed in again, but clattering the kerbs hard at the chicane on lap 52 meant he dropped from 0.5s behind to 0.8s and as Verstappen’s superior top speed then came into play on the next straight the writing was on the wall for the Ferrari driver.

On the next lap, Leclerc fell out of DRS range on the back straight and never recovered it – Verstappen easing clear to win by 3.7s.

Sainz took the final podium spot despite his tyres being much older than those on the following Perez, who had closed in again after his restart attack did not pay off.

On lap 52, Perez, still down on power after his earlier issue, made a late lunge at the first corner, but when Sainz swept right and the pair nearly touched the Red Bull driver locked up and went deep, allowing the Ferrari back into third, which he did not lose from there.

George Russell finished fifth after gaining massively under the safety car – the Mercedes driver having started in 12th on the hards and running a very long first stint in the hope of a race interruption. 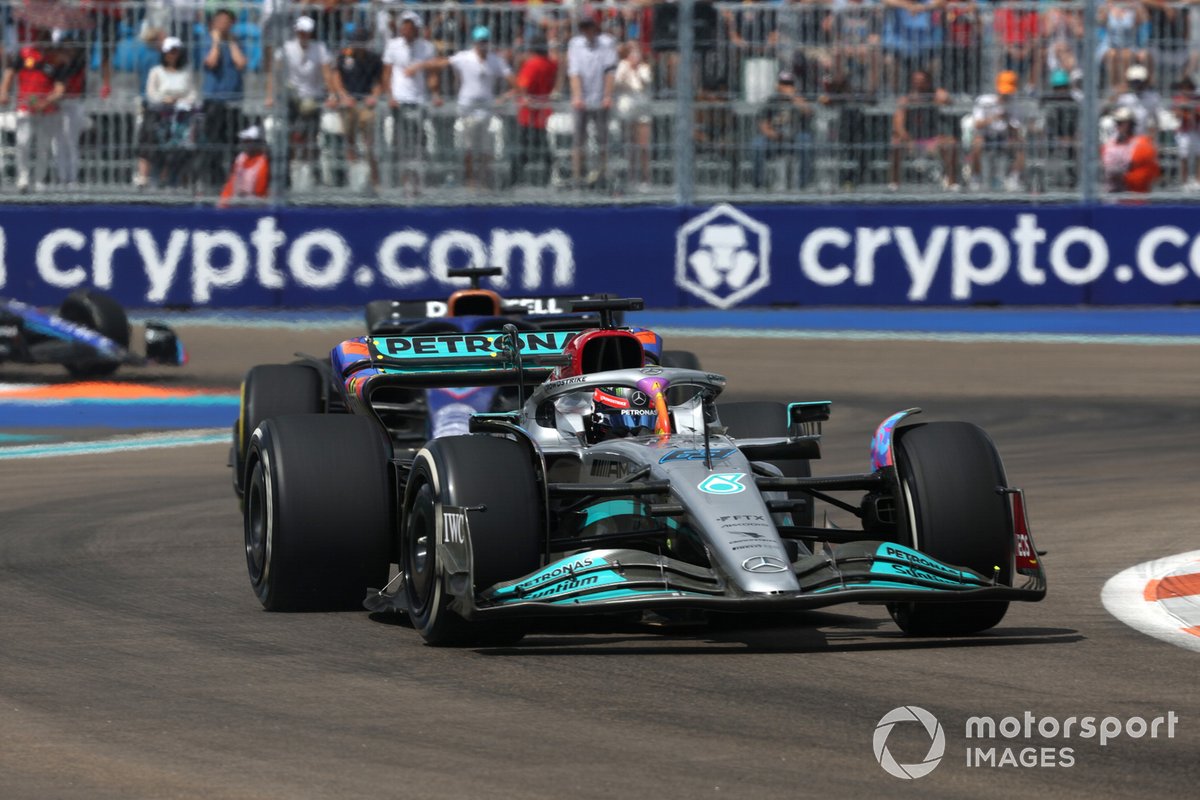 He got his wish and so was able to take the mediums while the rest where travelling slowly and restarted behind Lewis Hamilton, who had recovered from a slow first lap where he climbed over the Turn 1 kerbs and was then tapped by Alonso at the next turn, cost him momentum.

Hamilton recovered to run sixth behind Valtteri Bottas at the restart, with the Finn then gifting the Mercedes pair a place when he glanced the wall exiting Turn 17 – after which Russell came out on top of a wheel-to-wheel fight with his illustrious team-mate going through the Turns 11-12 sequence.

Russell initially passed Hamilton off-track, before letting the seven-time champion back through and repassing him at Turn 11 with DRS, with Russell holding on from there to finish fifth.

Bottas was seventh ahead of Esteban Ocon, who benefitted from a late Turn 1 shunt between Sebastian Vettel and Mick Schumacher.

The pair had both been running in the points when Ocon attacked Schumacher at Turn 17 on lap 53, with Vettel passing both in one move but giving DRS to Schumacher as they ran onto the pit straight.

There was contact between the Aston Martin and the Haas at Turn 1, which spun Vettel around broke Schumacher’s front wing – the former later retiring in the pits with damage and the latter coming home 15th having missed the chance to score his first F1 career points.

Alonso, who was given a five-second time addition for his clash with Gasly, took ninth, with Alex Albon completing the top 10 for Williams.

Zhou Guanyu was the other retirement – ordered to stop in the pits during the early laps.