Mercedes: Honda will give it a 'big go' in its final F1 season

While Mercedes has been dominant in 2020, wrapping up a seventh consecutive title double, the German car manufacturer is already favourite for 2021 because the car rules are being largely carried over.

But the growing pace of Red Bull, shown by Max Verstappen now regularly challenging Mercedes for wins, has highlighted that the Milton Keynes based team is starting to unlock some extra performance from its chassis.

Plus, with some aero upgrades allowed and Honda introducing an all-new engine, Wolff is mindful that Red Bull will be even strong so Mercedes' current form cannot be guaranteed for the next campaign.

Asked if he was worried about the rise of Red Bull, Wolff said: "We always worry, because you can say that this season was probably our strongest and with the biggest gap, but there was rarely more than three cars in front.

"Max is also doing a fantastic job. He's probably driving better than the car is actually capable of bringing. 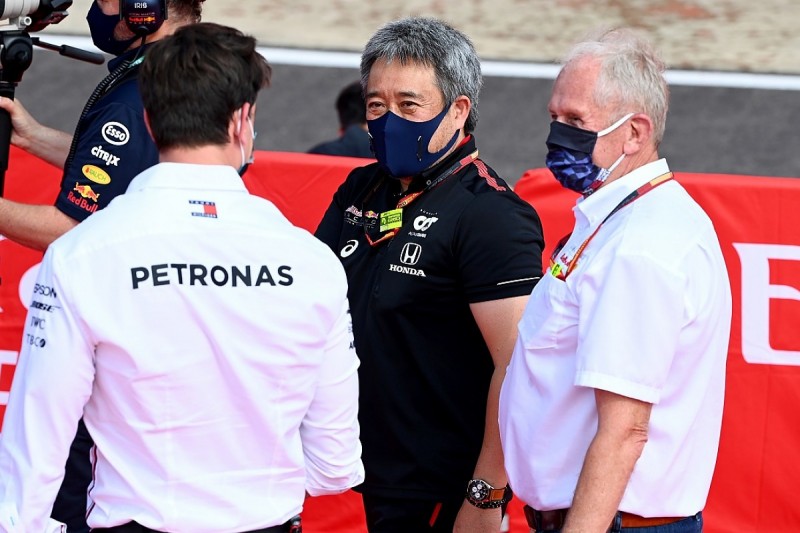 "It's like a deja vu every single weekend where you have these three amigos out in front and he's just clinging on with his finger tips to the Mercedes.

"Therefore next year, Honda is going to give it a big go I guess in the last season, and everybody at Red Bull is going to be motivated. Last but not least, Max."

Honda announced recently that it was quitting F1 at the end of 2021, because it needed to divert resources to help transition its road car company become carbon neutral over the longer term.

That decision prompted the Japanese manufacturer to bring forward to next year a revamp of its F1 engine that was originally planned for 2022 in a bid to sign off its grand prix tenure as strong as possible.

Red Bull is still looking for an engine partner for 2022 onwards, with its preferred option being to take over the Honda project and run the engines itself.

Such a plan could only happen if F1 agreed to an engine freeze to prevent expensive development, but that rule change does not have the support of Renault nor Ferrari.

Red Bull to "build" Albon up again ahead of Turkish GP