Mercedes Formula 1 technical director Mike Elliott admits the team feared that one of its cars might miss the Austrian Grand Prix if it was damaged in Saturday’s sprint race.

Lewis Hamilton and George Russell both had heavy accidents in Friday’s Q3 session in qualifying, and the former was forced to switch to the spare chassis, which was built up for him on Saturday morning.

Both drivers lost their rear wings in the accidents, and the only spare example of the low-drag spec prepared for the Austrian GP was given to Hamilton, as he was further down the grid and thus had more overtaking to do. Russell meanwhile was obliged to switch to a less optimal higher downforce rear wing for the sprint.

The team also had only one spare floor and had to make another from what was left of the damaged floors.

The fact that Mercedes had been left scrambling to have two cars ready to run on Saturday is a clear indication of how the cost cap has impacted the ability of the top teams to produce sufficient spares of the spec they are currently racing.

“When you crash two cars it's always going to make for a very difficult weekend from then onwards,” Elliott said in a Mercedes video.

“So, damage that we can repair, but not repair over a weekend. That meant completely rebuilding Lewis's car from scratch and it meant also trying to build one floor out of two. We had one complete spare we could fit, and we had to get the best out of the two crashed floors to build another.” 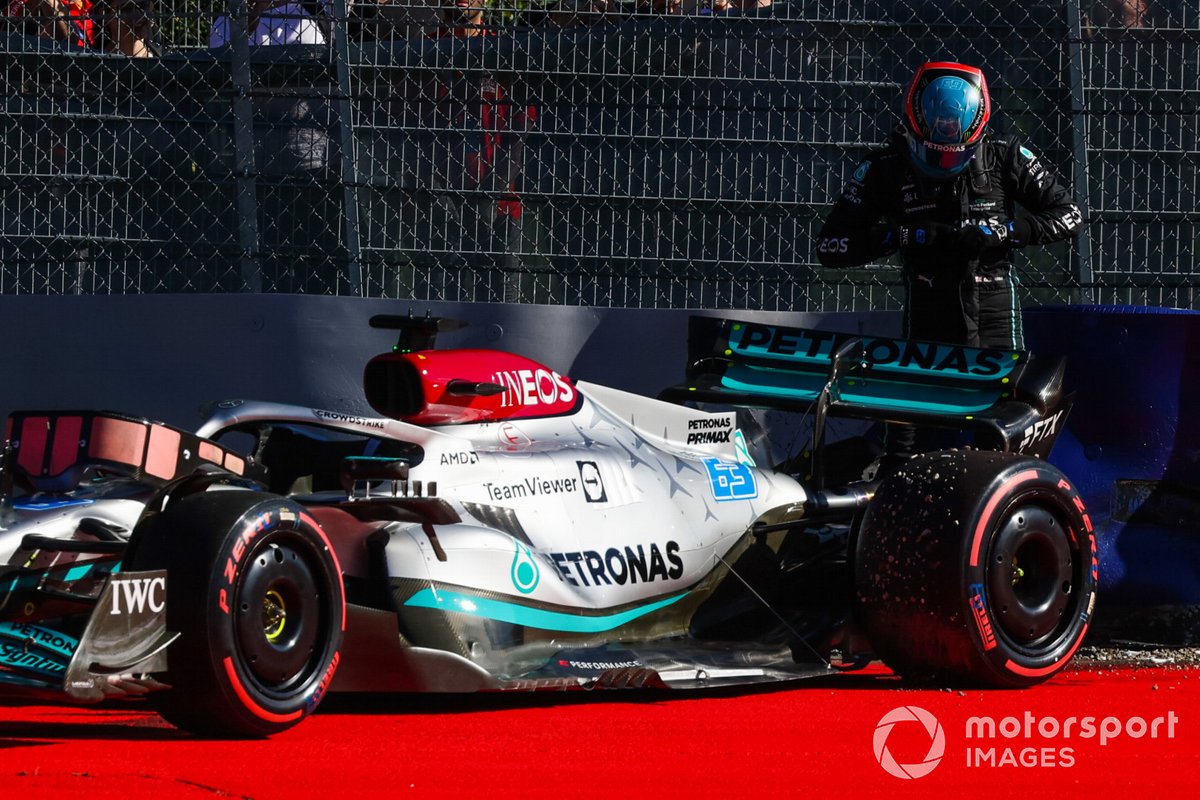 George Russell, Mercedes W13, gets out of his damaged car after crashing out in Q3

The FP2 session gave both drivers a chance to check their rebuilt cars and work in with the limited changes allowed after qualifying. Elliott acknowledged that heading into the Saturday afternoon sprint race the team knew further heavy damage could create a serious problem.

“Having rebuilt the cars we also had to dial in the set-up again, and you've got very limited time in FP2 to do that, and that was always going to be another compromise,” he said.

Because of post-qualifying parc ferme regulations applied on Friday night after the regular qualifying format had taken place, the team had limited time on Saturday morning to get the two cars ready, as breaking parc ferme would have ensured a pitlane start for the sprint race.

“I think you probably saw we managed to get George out about five minutes into FP2 and with Lewis we were about halfway through the session,” said Elliott.

“There is a huge amount of work that went into getting those cars ready, and in Lewis's case he had done so much damage to the chassis, actually only cosmetic damage but damage that we couldn’t fix in the field, we had to sort of build his car from scratch on Saturday morning.

“That car had to be built from nothing, fitting the engine, the gearbox, all the suspension, all of the car systems that bolt around the chassis, all had to be put in place, and the mechanics managed to do that in three and a half hours on Saturday morning. Which is an amazing achievement, and all credit to them for actually getting us back out and into FP2.”