Russell tested the Mercedes W08 in the two-day Hungaroring test following the Hungarian Grand Prix, and also became the first driver to try the halo since the FIA announced its mandatory introduction from 2018.

Mercedes ran the device for "an outlap and an inlap, just to see how the aero is with it on", said Russell.

He added: "The halo was surprising, I had a much better view than I ever imagined.

"One very funny positive was that at the end of the day, when the sun was coming down, the halo actually blocked the sun from my eyes.

"So I actually saw more than I would usually see on circuit at 5.30pm when the sun is low.

"To be honest, from a drivers' perspective, when you're doing a quali lap the visibility is completely fine.

"The only hindrance could potentially be the start lights, but I was extremely surprised by the halo and by what I could see."

Russell said he found it "tricky" to get in and out of the car at first but believes drivers will quickly adjust to the process.

"It just takes a bit of experience, finding the right techniques, where to put your arms and stuff," he said.

"The only thing is getting your leg into the car, it's quite high.

"But I think most people would just have a step to stand on to get in and out of the car." 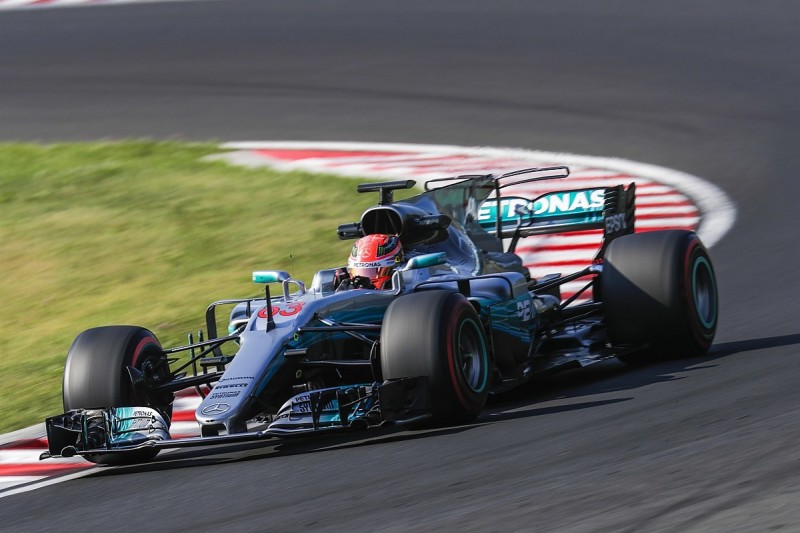 Russell completed the most laps of any driver (119) on the first day of the test, and backed that up with a 90-lap haul on day two.

"Most drivers want to be at the top of the timesheets, but us at this test it wasn't really about that," he said.

"We had our goals set on different things, and we came away from this test learning a lot.

"A couple of the other teams were focusing on low-fuel quali runs and getting to the top of the timesheets had slightly different goals to what we had.

"From our point of view, we took everything away we needed to and had a productive test."