Ferrari driver Sebastian Vettel took his second win from three F1 races at Sakhir, with Lewis Hamilton chasing him down in the final stint

Mercedes accepted that if it had intervened earlier in the Bahrain race to get Hamilton past team-mate Valtteri Bottas sooner, it could have threatened Vettel more but it was wary of treating either of its drivers unfairly.

The reigning champion team had a strict policy of equality with Hamilton and Nico Rosberg during the last three dominant seasons.

But with Vettel back ahead in the drivers' championship, Mercedes motorsport boss Toto Wolff says his team may reluctantly have to operate differently from now on.

"We don't like that at all," said Wolff, when asked about the possibility of changing Mercedes' rules of engagement.

"It's not what we have done in the last couple of years but the situation is different now, so it needs a proper analysis of what it means and where we are.

"We'd like to give equal opportunity at the start of the race, I think we owe it to them. 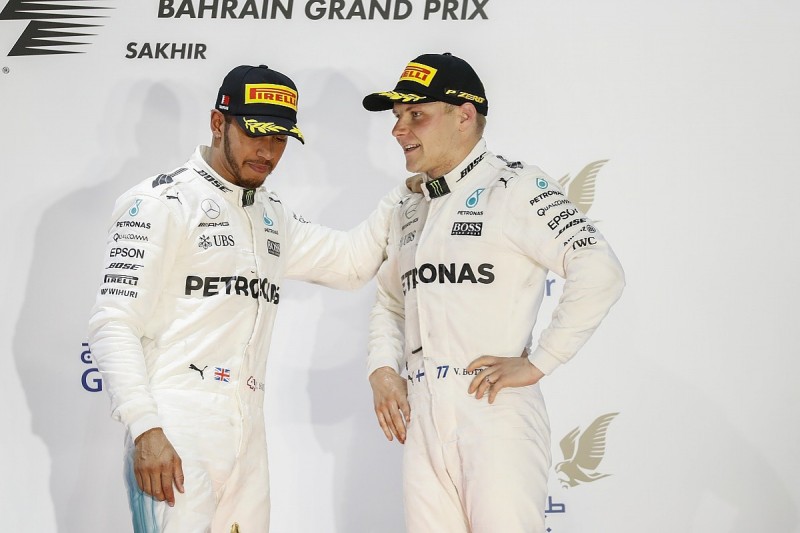 Wolff was clear it was unlikely Mercedes could go as far as appointing a clear number one before the start of a race, describing a suggestion of giving priority to the driver on pole as "too harsh" and "the opposite of what we have done through the years".

Bottas struggled with overinflated tyres while leading the opening stint following the failure of a generator on the grid.

Wolff acknowledged that had Vettel not been between the two Mercedes, the team would have got Bottas out of Hamilton's way sooner.

"It's important as we start the race to give them equal opportunity," he said.

"You have two cars starting on the front row, if they run second and first you just have to let them race.

"When you have a problem on the car like we had, that would have been a situation we would have considered to swap them but with a Ferrari in between, we couldn't.

"Three races into the season, you don't want to go there yet."

Hamilton is current on 61 points in the drivers' championship, seven behind Vettel, with Bottas in third place on 38 points.