Tributes to Lauda have poured in since the news that he passed away on Monday night, and Mercedes is running special branding at the Monaco Grand Prix to commemorate the Austrian.

Wolff, speaking ahead of first practice, said he still found it "so difficult" to talk about.

"My emotions are so overwhelming as a friend," said Wolff. "The last 48 hours were terrible, I feel like a zombie.

"I keep looking at the pictures and find myself with tears in the eyes every half an hour, because he's not there anymore.

"I feel that we have lost the heart and soul of F1."

Lauda had a lung transplant last summer and a protracted spell in hospital, before falling ill again earlier this year.

Wolff used to be married to Lauda's cousin and they started to travel to races together when Wolff was at Williams, before becoming Mercedes colleagues in 2013.

"We knew that it was not going well," Wolff said. "It was probably a matter of days.

"I got a text message from his wife on the Monday evening. I was in Paris.

"Since then, I'm not myself. It feels surreal to be in an F1 paddock with Niki not alive anymore.

"Although we could see it coming, when it happens, it's so raw that you're not going to see him anymore." 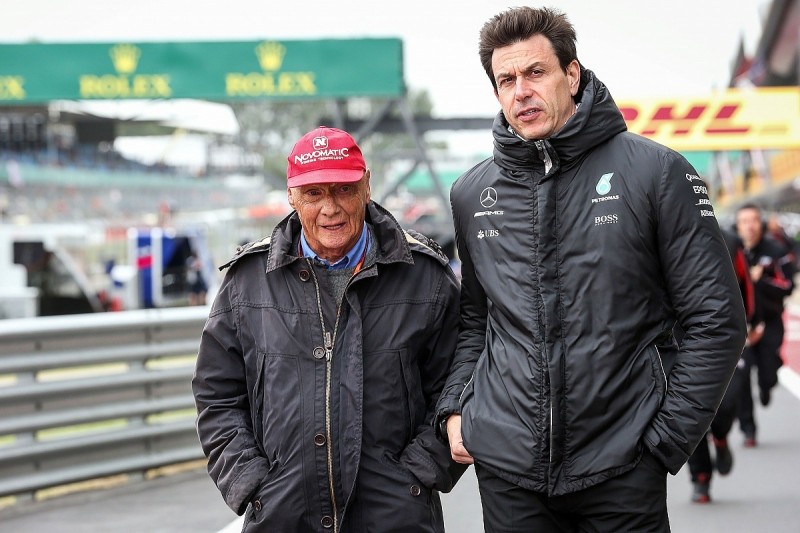 Lauda did not return to the F1 paddock after his transplant, but followed races from hospital and home.

Wolff last spoke to him on the phone after this year's Azerbaijan Grand Prix to try "as much as possible to bring normality into his life".

He said Lauda's message was "just carry on, it doesn't go any better" after Mercedes recorded another one-two.

Championship leader Lewis Hamilton was excused from media duties on Wednesday in the aftermath of Lauda's death.

Hamilton has been criticised for that, but Wolff - who was also scheduled to speak Wednesday - suspected his driver was in "a similar frame of mind" as himself and was grateful Mercedes and the FIA "let us off the hook" because "it is very difficult to comment 48 hours after you've lost a dear friend".

"We both got the message at the same time and spoke to each other right afterwards, and these last days," Wolff added.

"Everyone will have his own personal way of mourning and feeling the sadness."

Wolff asked for respect "that it is impossible for us to comment and be reminded about the sad situation" throughout race week, which prompted the decision to address the media as one.

"Hopefully then you will accept that we can carry on with our racing," said Wolff.

"There is nothing else that Niki [would have] wanted us to do."

Piola on the 2019 Monaco tech specials