George Russell won the short race after passing Max Verstappen, who struggled with his medium tyres compared to the Briton's softs.

Russell and Lewis Hamilton will start from the front row on Sunday, with Verstappen and team-mate Sergio Perez immediately behind.

Although Mercedes showed great pace in the sprint, trackside engineering director Andrew Shovlin cautioned that potentially warmer conditions could favour the Milton Keynes-based team in the grand prix itself.

ANALYSIS: Why Mercedes can realistically resist Verstappen to win in Brazil

"If we look at all the data we've had over the entire year, Max is going to be quick," Shovlin said. "If the track is warmer, it will probably help some of their issues.

"They looked like they were front-limited, that problem is going to diminish a bit. And also they won't be on the wrong tyre. We've all got to run a medium or a hard as well as the soft. So we're expecting a tougher battle.

"But we couldn't have got ourselves in a better position today. It's great to have both cars at the front. And recently, we've had decent race pace.

"So we'll see what we can do. We don't expect it to be anything other than a very, very hardcore battle. But we're trying desperately hard to get our first win."

Verstappen was compromised by starting on the medium tyre, which didn't work as well as the softs used by his rivals.

"It doesn't follow that they were unaware that the medium was a weak tyre," said Shovlin of the choice.

"It might be that they knew it was a weak tyre, and they're getting it out of the way today, rather than having to run two of those tomorrow. So I suspect it was strategically the lesser of two evils." 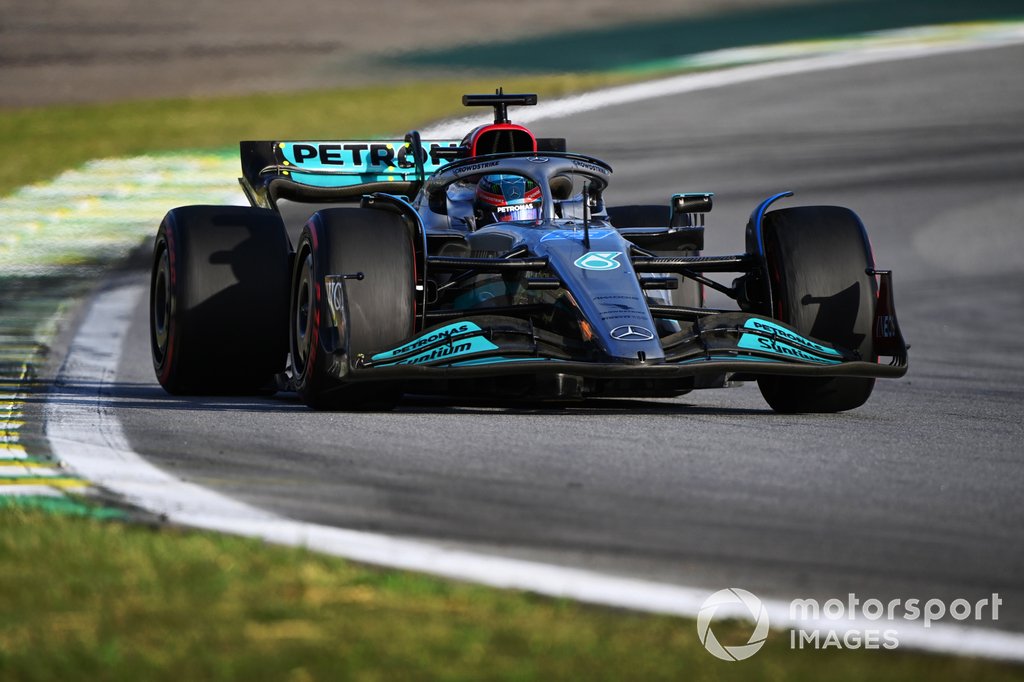 Shovlin said that the team had found a "good window" with the W13 on Saturday.

"If you look at a sprint race in general, you've got one hour where you're free to change the set-up, and then you're locked in when you roll out for qualifying," he said when asked by Autosport about the impressive sprint performance.

"And it goes without saying that, if you get the set-up right to start, you're in a good position. The car was working reasonably well, the track was quite tricky on Friday.

"This morning we didn't feel that we were in great shape, with quite a lot of rear overheating, and possibly the cooler conditions suited us today.

"We thought it would definitely help some of the problems. But it just seemed to fall in a good window. And we obviously had both cars on the right tyre, which helped."

Shovlin praised Russell for his charging performance in the sprint, during which he got past Verstappen after several bold attempts.

"He did a great job coping with the pressure up front, and coping with racing a guy like Max, who is probably the hardest one out there to get by," said Shovlin.

"From when George was in Williams, we knew he knew how to race. And he's very good at overtaking.

"So it wasn't a surprise the performance he put in, but it was a fantastic drive. And from where we started the year, we knew that we had a long, long journey to get to a point where we can win races.

"It's encouraging that we're starting to see some of the milestones that you see along that journey.

"Absolutely faultless performance by him. Off the line, we were surprised that he was putting Max under so much pressure, but the real surprise was when he just started to reel him in later on, and really started hounding him."