Mercedes had intended to bring leader Rosberg in after Ricciardo stopped at the end of lap 47, when the German would have completed a 15-lap stint on soft-compound Pirellis, but it abandoned the plan when it became clear the Red Bull driver was likely to jump ahead.

Ricciardo set the fastest second and third sector times of the whole race on his out-lap, which would have eliminated his deficit of just over 2.5 seconds to Rosberg had the Mercedes driver stopped - with the Australian's pace continuing to surprise in the first part of the final stint.

"Daniel pulled out a stunning lap and the gap shrunk to zero," said Mercedes team boss Toto Wolff of the decision to leave Rosberg out.

"Our statistical tool told us we had seven seconds [predicted advantage at the finish after Ricciardo's stop], then over two or three laps he was going three, three-and-a-half seconds faster and suddenly the algorithm showed no gap anymore.

"So that was the moment to decide: do we want to push now or wait until the end, conserve the tyres, conserve the brakes and fight for it?

"This [waiting to the final laps before attacking] is what we decided."

Rosberg held on to win by 0.488s, but despite such a narrow margin he insisted he was confident he would win once on the last lap.

"With 10 or 15 laps to go, just after the pitstop, the team said he would be with me at the end of the race," said Rosberg.

"So I had to be on it in that last stint, get everything right and nail all those laps.

"It really worked out, with the management, all the way to the end and the tyre lasted just right.

"By the time I started the last lap, I knew it was going to be enough because Daniel's tyres weren't that fresh anymore." 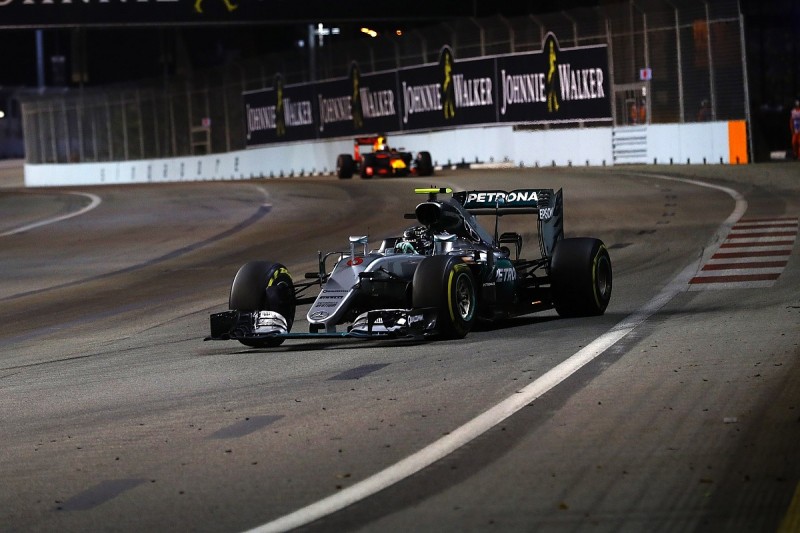 Despite the slender margin of Rosberg's victory, Ricciardo does not believe he could have done anything to change the result.

"I'm pretty happy because I felt I did all I could - the perfect race," said Ricciardo.

"If there was anything that could have been more perfect, it was the start but Nico got off the line well.

"So even with an amazing start, we wouldn't have got the jump.

"The team put me on a three-stop at the end and it was fun.

"It was good to push the whole race and I knew I would get close to Nico at the end.

"I was at least putting some pressure on him and giving the crowd a little bit of hope."