Fernando Alonso says McLaren's pace during the Belgian Grand Prix weekend was "great news", after his run to seventh exceeded expectations on a track where he had expected to struggle

Alonso started the race from the rear of the grid thanks to a 60-place grid penalty for engine changes and his car breaking down at the start of qualifying.

But a charge through the pack in the chaotic opening laps brought him into the midfield, and the Spaniard was then promoted to fourth as he opted to stay out on track while those around him pitted, before the race was red flagged.

Alonso was unable to keep hold of that spot after the restart, ceding places to Lewis Hamilton, Sergio Perez and Sebastian Vettel before the finish, but he brought his McLaren home in seventh ahead of Williams drivers Valtteri Bottas and Felipe Massa, as well as Kimi Raikkonen's Ferrari.

"It was a good feeling; we had the pace this weekend, a little better than expected given the circuit that it is," said Alonso.

"Top 10 in qualifying yesterday with Jenson and in the points today is great news being in Spa.

"All the bad luck we had in the weekend turned into good luck in the race with the incidents and problems we avoided, then the safety car and the red flag - so we found ourselves in a very good position.

"After that we had the pace to more or less keep position.

"We didn't hold Hamilton, Checo [Perez] or Vettel because they were just too fast, but [we had] enough to keep the Williams behind so good news.

"Seventh is very good points for the team and [to be] in the points, on a circuit like this, was unthinkable a couple of months ago." 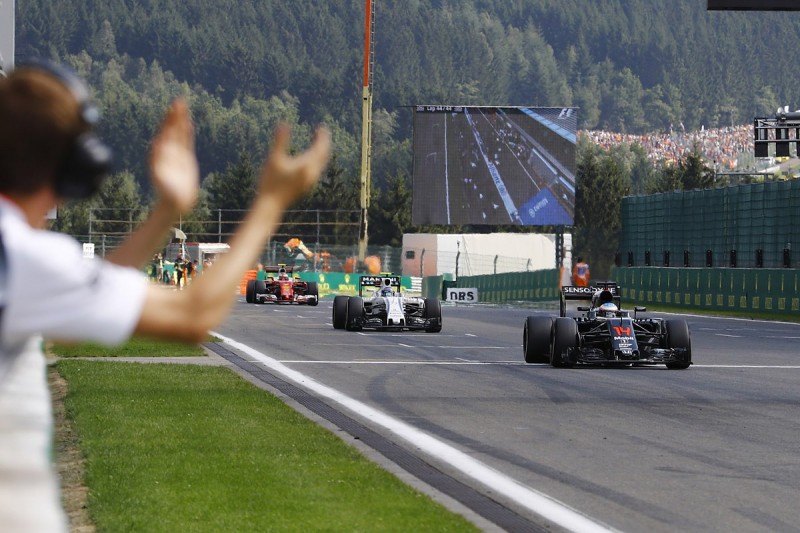 The result moved McLaren ahead of Toro Rosso for sixth in the constructors' championship, and while Alonso said that was still some way short of McLaren's targets, it demonstrated an impressive rate of progress.

"We were not able to fight with Williams at Spa last year, and some months ago, so we are going in the right direction," he said.

"The joy, now, is still not maximum because when you are fighting for P7 it's not the target you have.

"But the progress that the team has made is just amazing and if we keep this momentum for next year that will be great news.

"We overtook Toro Rosso in the constructors' championship and we can be a regular in the points from now on."

Raikkonen: Verstappen will have massive crash if he doesn't change