McLaren says it cannot let victory in the Italian Grand Prix allow it to ease off in its push to get to the front of the Formula 1 grid regularly.

The Woking-based squad became the first team to take a 1-2 in 2021, with Daniel Ricciardo leading home Lando Norris at Monza.

But despite the joy of the triumph, team principal Andreas Seidl is clear about just how much room for improvement he thinks his squad needs to make.

He says that the drubbing it took compared to the top teams at the Dutch GP a week before Monza highlighted just how much it still needed to push on.

“What I respect, looking at Mercedes and Red Bull, is that they have a car that can fight for the win every single weekend,” explained Seidl.

“That is the gap we have as a team compared to these guys, so I am not too focused on a 1-2 or whatever. In the end it is a sensational result for us, but only seven days before we got destroyed in Zandvoort in terms of performance.

“That is the gap we still have to the top teams with our car, and that is why we have to keep working hard in order to keep closing the gap in all kinds of circuits.”

Seidl, who celebrated the victory with the entire McLaren workforce at Woking last week, added that the win will help lift spirits at the squad, and that it provides proof of the progress it is making.

“It is the best motivation to keep going,” he said. “I am obviously very happy with what both drivers showed, and I am very happy with Daniel making his steps since the summer break and getting back to where he wants to be, where we want to have him. 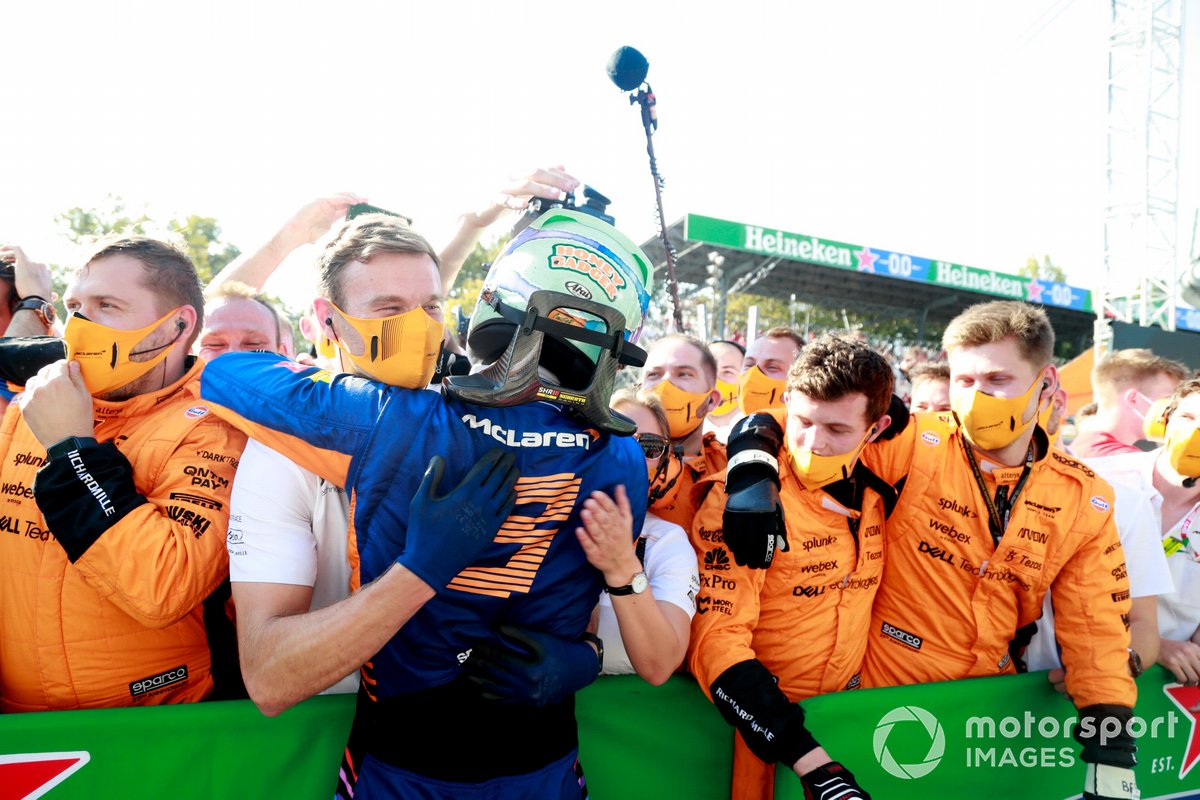 “And this is in addition to Lando, who is in unbelievable form this year and obviously that’s the drive that we want to have and we need to have in order to fight for Ferrari, and in order to keep going in our journey towards the front in Formula 1 again.”

While McLaren has been making progress up the grid, having finished last year as the third best team, it had been left without a win since 2012.

But even though rivals like AlphaTauri, Racing Point and Alpine grabbed victories in recent years, Seidl said he never got annoyed by the situation.

“It is not frustrating to see other guys winning, because in the end if you win the race you deserve it,” he said.

“The more important thing for me is to see that we continually improve as a team, so in the end we are going to get to that point as a team to win races down to our own performances each weekend, independent of track characteristics, tyre selection, track conditions. That’s what I am focused on.

“But obviously we want to take opportunities when they are there, because obviously a moment like [the Italian GP] is simply unforgettable for everyone in the team.

“It is important to celebrate these moments because they do not come that often at the moment for us. But we are on the up. We have a lot of work ahead of us, but we are very happy how we could pull this off.”