McLaren trialled an LED light system on its rear wheel covers during post-season testing in Abu Dhabi on Wednesday, offering a sign of future Formula 1 technology.

During the opening run of Wednesday’s test session at the Yas Marina Circuit, wheel covers were fitted to the rear wheels of Lando Norris’s McLaren car that featured LED lights.

Norris completed only one flying lap using the LED light wheel covers before returning to the pits, after which they were removed for his subsequent running.

It nevertheless served as a taste of future technology that could be introduced to the series in the future. The lights could potentially be used either for team marketing purposes or to provide information such as car position.

“There was an idea to put some LEDs into the wheel covers, to use these wheel covers also for marketing purposes, that means you can display any kind of message,” Pirelli F1 chief Mario Isola told Autosport in Abu Dhabi.

“But clearly you have to test them, because the wheel covers are also an element that could unbalance the tyre.

“It’s really important that the tyre is properly balanced, otherwise they start to have vibrations.”

Isola added: “When you fit this [LED light] device and the device is working, you can do whatever you want.

“You have the technology, so it’s easy to programme what you want to display.” 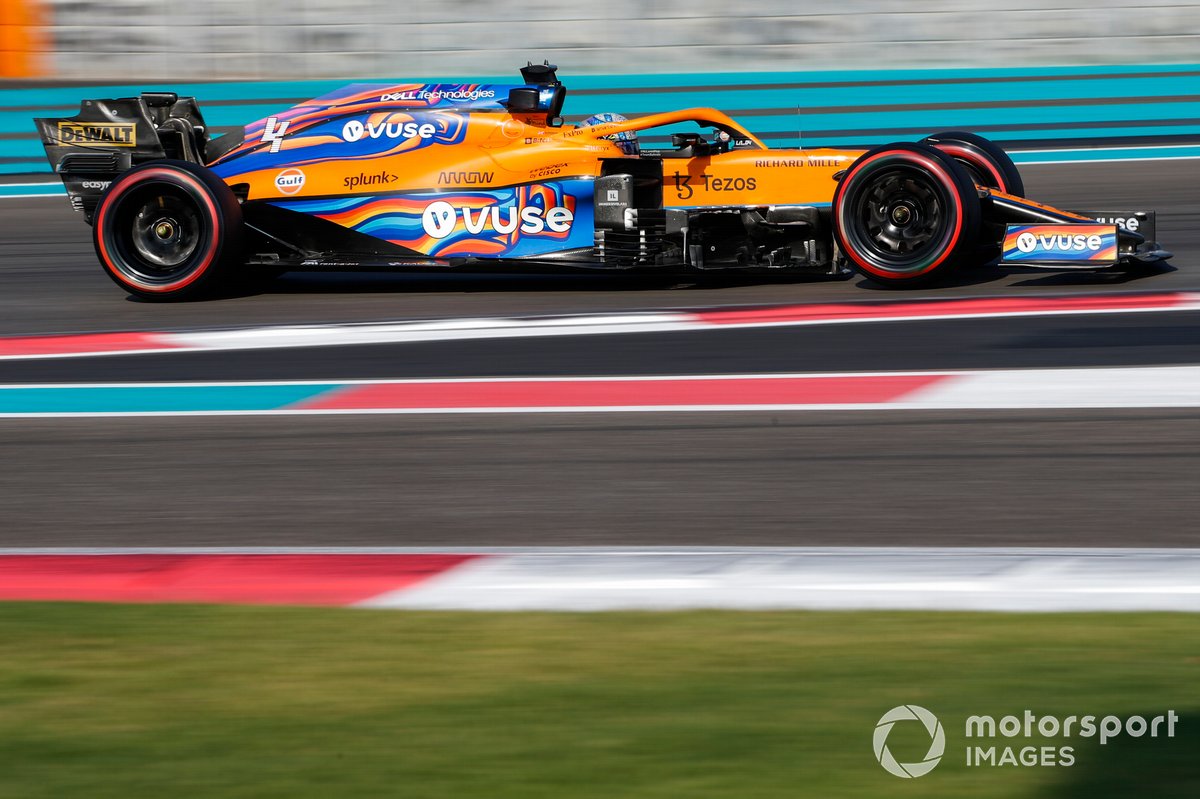 Wheel covers will return to F1 next year as part of the overhauled technical regulations, prompting teams to trial them on their modified mule cars during the Abu Dhabi test running.

Teams have been permitted to use Pirelli’s new 18-inch tyres during the test on their mule cars, giving them a chance to pick up some data ahead of their introduction next year.

The additional wheel bodywork, which also includes a deflector over the top of the front wheels, is intended to reduce the wake produced by the wheels as they rotate.

Isola explained that revisions were required for the initial wheel cover designs for the 18-inch tyres to ensure they remained balance, and that pit crews could easily remove the tyres from the car.

“The first version of the rim cover was very close to the rim, and we had two problems. One was for the mechanics in the pit stops, because they need to put their fingers in and take the tyres off, and with the wheel cover it was not possible, so they had to modify it.

“The second was we couldn’t add the balanced weight on the outside. That’s why if you see the latest version of the wheel cover, there is a shape that is covering the rim, but then you have a step closer to the rim that is useful for the mechanics to take the tyre and for us to balance the weight.