McLaren boss Andreas Seidl said the team's decision to impose team orders in the Azerbaijan Grand Prix was dictated by Daniel Ricciardo and Lando Norris being stuck in between both Alpine cars.

After a disappointing qualifying session Norris and Ricciardo started in 11th and 12th on different tyre strategies, trying to cover for various scenarios in a bid to move up the order.

But a lack of top speed due to McLaren's draggy car meant neither driver managed to move up, with Fernando Alonso's slippery Alpine proving impossible to pass.

In the opening stint Ricciardo informed the team he had pace in hand compared to his team-mate but was told to hold station.

Ricciardo's alternate strategy of starting on hards, and then pitting for mediums during a prolonged Virtual Safety Car, allowed him to come out in front of Norris after his only pitstop.

It then was Norris who wanted to have a go at the Australian in the closing stages, but again McLaren instructed its drivers to hold station and come home in eighth and ninth respectively.

Both drivers accepted the order, with Ricciardo saying the two different instructions cancelled each other out as Norris returned him the favour of staying behind the other, although Norris felt the two situations were not entirely comparable.

Seidl explained that the pressure from the second Alpine of Esteban Ocon behind them meant that letting his two drivers fight made little sense, especially as neither seemed remotely capable of challenging Alonso ahead.

"I think what we heard on the radio is what you would like to hear from every race driver, being ambitious and trying to have the best possible race for himself," Seidl said about Norris' frustration at the time.

"That's why there's a team in place that makes sure we have the best possible outcome for the team without risking losing two cars on track by crashing into each other.

"If Daniel would have gone by Lando at the beginning of the race, we would just have ended up in a yo-yo like we have seen with some other teams already this year, both being stuck behind Alonso and having the risk that Ocon actually goes through at least one of these cars.

"Our idea was with holding position for both cars behind Fernando, that we make sure by that we keep Ocon in check, which we did." 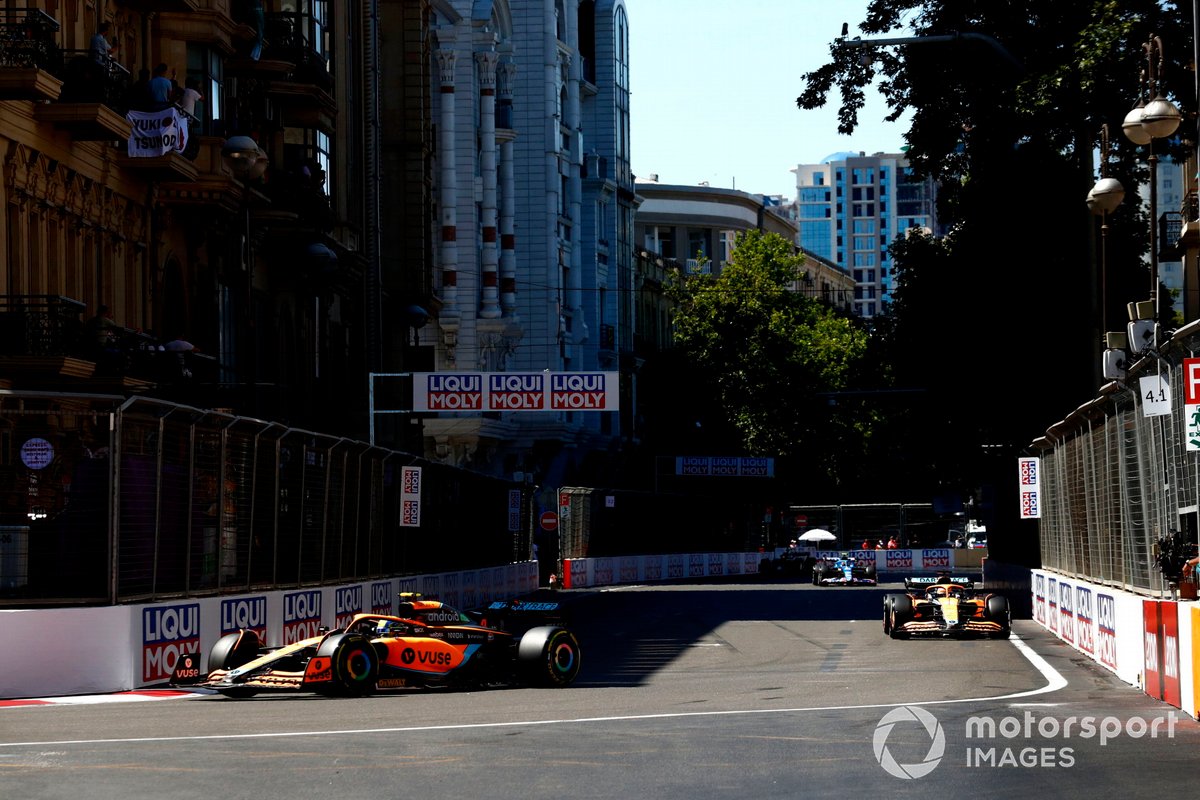 Seidl added that his drivers are free to race in principle, but that the circumstances dictated otherwise this time. When asked by Autosport if the perilous nature of Baku's street circuit played a part, Seidl said: "Yeah, it always depends on the circumstances.

"Our drivers are free to race, and we always try to provide for both drivers the same opportunities to do well, because that's our responsibility.

"But if we are on different strategies and so on, obviously, you need to make sure as a team that you maximise the outcome for the team."

The team doesn't believe there was anything else it could have done to get ahead of Alonso, because going off strategy would have pitted its drivers in traffic, and it didn't have the top speed to clear it.

"I think the only chance probably to get Fernando was if he would have pitted also with Lando, maybe at the first virtual safety car on lap eight or nine where several cars pitted," Seidl explained.

"But with our lack of straightline speed that we had all weekend we knew if we do that and fall into traffic, we would not be able to clear this traffic quickly because of our straightline deficit. Different to [Pierre] Gasly, for example, we would have gone completely out of the race.

"And that's why it was the right thing to stay out and just stay with Fernando, seeing if any other opportunities would come up trying the overcut as well, for example by making sure you keep your medium tyres in the first stint in a happy place that you then can push when the car in front boxes.

"But with the tyres not having really a lot left then we just had to settle in the position where we started with Lando. With everything I see at the moment, I think we maximised pretty much what we had. I think it was just not possible to do more with the package we had here."