McLaren and Renault will pose a "significant" threat to Force India in the 2018 Formula 1 constructors' battle, according to the team's deputy team principal Bob Fernley

Force India secured fourth in the constructors' championship for the second successive year in 2017, finishing a comfortable 104 points clear of fifth-placed Williams.

But Fernley is aware Renault is on an upward trajectory, snatching sixth in the constructors' championship at the final race of last season when Nico Hulkenberg finished ahead of both Force India drivers to take sixth in Abu Dhabi.

McLaren, which like Renault has a notably bigger budget than Force India, is ditching Honda for Renault power for 2018 and expected to improve on last season's ninth in the standings.

"Both Renault and McLaren look quite handy," Fernley told Autosport.

"They are a significant threat and we need to take it seriously. We need to do quite a bit of work ourselves to make sure that we accommodate that.

"There will be no quarter given for those three cars. The three teams will be locked into a massive battle." 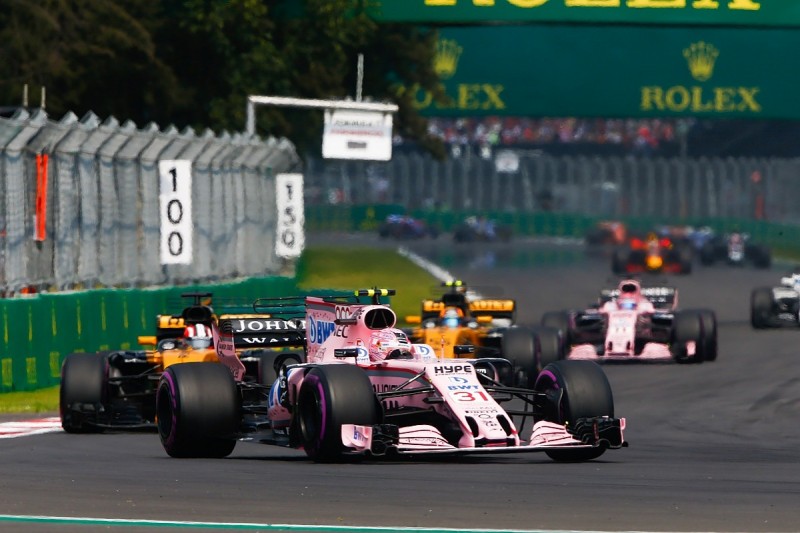 Force India has one of the smallest budgets on the grid, at around £90million, compared to Renault running on £150m and McLaren £185m.

"It'll always be difficult to compete against the bigger budgets, but saying that, we've done it for two years in a row so there's no reason why we can't do it for a third," said Fernley.

Force India started the 2017 season consistently and reliably and then pulled clear of the midfield, slotting in behind the top three teams with an impressive rate of development.

When asked if McLaren and Renault's increased threat will change the way Force India approaches this season, Fernley said: "I don't think so.

"If you looked at the beginning of the season, which was the hard part, we didn't have the car underneath us. So we had to use a lot more racing strategy, reliability and good driving.

"That has to stay in place but on top of that, hopefully we're performing properly [in 2017].

"You'll still have that gap to the top three but there will be three teams going for fourth place."

How F1 avoided a pre-season failure