McLaren has launched a major recruitment campaign to boost its engineering and aerodynamic talent as part of an effort to help it push up the grid in Formula 1.

While the Woking-based squad openly admits that it is waiting for a new windtunnel and simulator to come on tap in the middle of next year before it can accelerate its progress, it is not sitting back in the meantime.

After a season where it has not made the progress it wanted, having fallen away from the top three teams, McLaren knows it needs to lift things if it wants to move forwards.

Speaking at the season closing Abu Dhabi Grand Prix, team principal Andreas Seidl has revealed that part of its efforts to improve things includes it bringing on board more staff over the next 12 months.

The team felt that the way that its early season brake issues triggered problems for its in-season development programme had exposed a lack of resource.

“This season clearly has showed us some of the weaknesses we still have in terms of set-up of the team,” said Seidl.

“And thanks to the issues we were having, it became obvious to us that we didn't have enough resources available compared to other teams, especially on the engineering side, in order to be able to deal with developments of the current car plus making sure in parallel you can have a look on next year's car as well.

“That's why we have put in a lot of hard work, also together with the financial department, knowing that we are working in a cost cap environment as well, to find synergies and efficiencies within the current way how we do F1.

“That has allowed us now to start, pretty much two months ago, quite a significant campaign of hiring more engineers to simply have more people available, in order to be able, in the future, to do things more in parallel.

“I think that's definitely one of the weaknesses we're having currently in the team. And hopefully, with getting more of these engineers on board in the next year, we will be able to make another step there.” 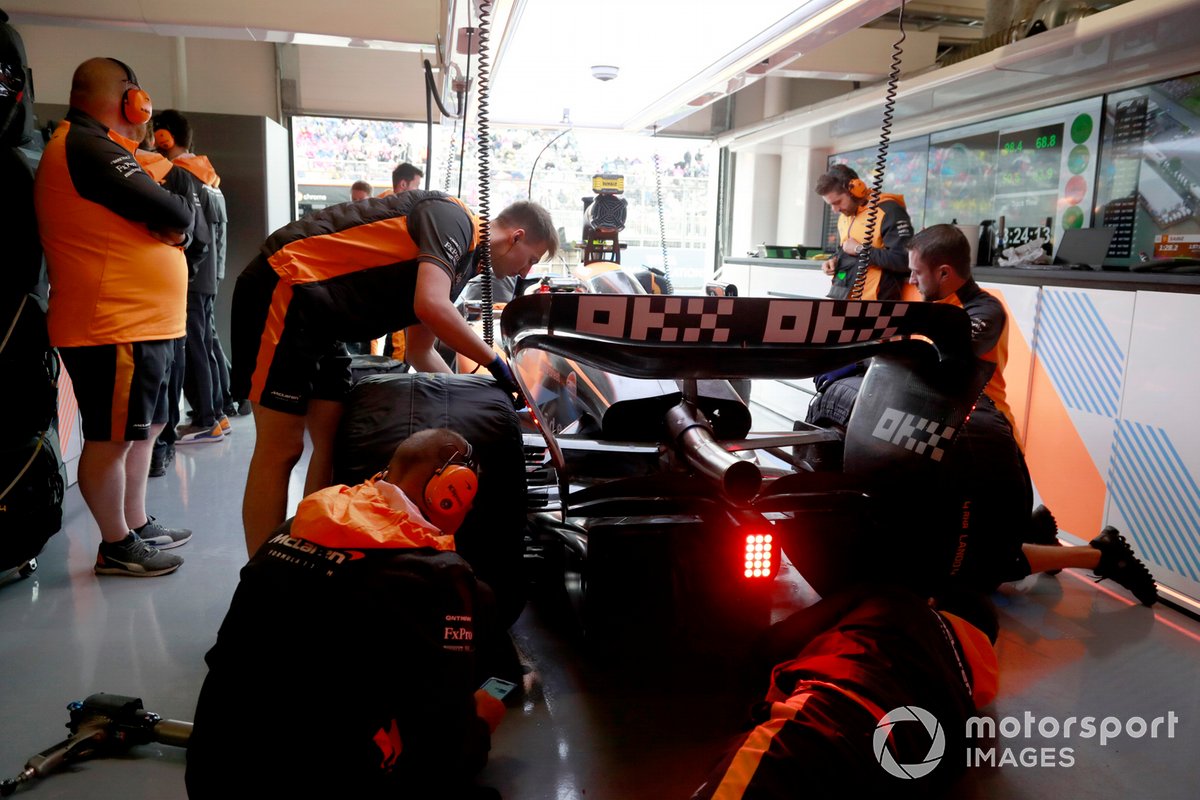 Mechanics work on the car of Lando Norris, McLaren MCL36, in the garage

It is understood that the jobs include high-profile positions including aerodynamics project leader, senior aerodynamicists, senior suspension designers and aerodynamics designer.

While teams are operating under a cost cap in F1, McLaren gave the green light to the recruitment push after a deep analysis of its spending over the first year of the new rules had highlighted where savings can be made, and resources diverted, to bring on board the staff who can help improve its performance.

Seidl also explained that the major brake problems which hampered McLaren in pre-season testing and the opening race in Bahrain had long-term consequences for the squad, which may still be felt next year.

“I think it had quite a consequence for us as a team for different reasons,” he said. “First of all, obviously, with testing being so limited nowadays, and going into a completely new era of Formula 1, with completely new cars, then missing out on half of the testing, compared to all the other competitors, definitely put us on the back foot quite a lot in terms of preparation for the season.

“Then we had to use a lot of resources as well, at a time where we would have liked to use all the resources simply to develop the car, instead of fixing brake issues.

“It was also something that I think put us on the back foot even further, and to a certain degree, probably even had an impact on the development of next year's car, because we couldn't start it as early as we would have liked to do.”