Brown admitted in Montreal that McLaren had back-up plans for 2018 if Honda's struggles continue in the second half of its third season back in F1, and the team then lost what would have been its first point of the season with Fernando Alonso's late engine failure.

Racing director Eric Boullier called that "absolutely not good enough" post-race as part of McLaren's strongest public criticism yet of its engine partner.

Asked if the McLaren management's recent criticism was intended to send a message to Honda's board, Brown said: "I think it was important that we spoke up this weekend, it was really the first time that McLaren brought forward their views.

"I don't want to repeat ourselves, and I don't think [Alonso's failure] changes anything, it just reinforces our position.

"I think they know something needs to be done. They are frustrated, they are upset.

"I think 400 million people saw what happened, so I don't think we need to communicate already further than we already have.

"I don't know what the [Honda] board thinks, but I think everyone thinks the same thing: just work hard to try and fix it. 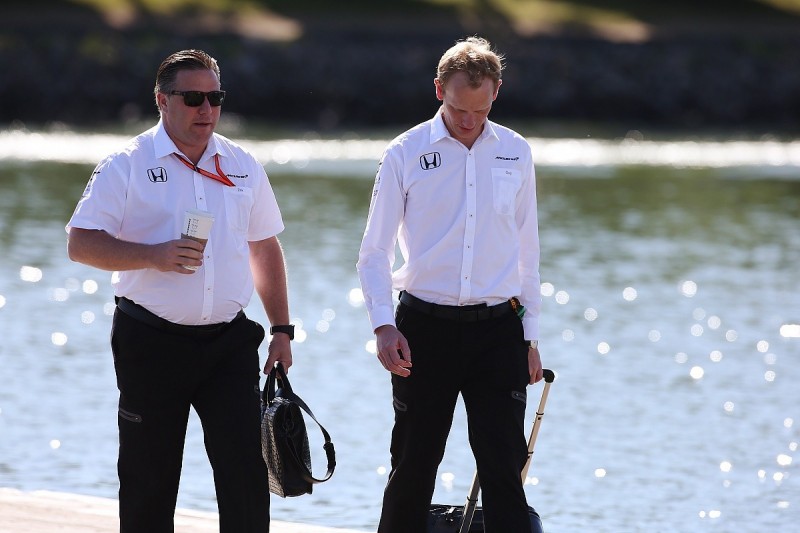 Honda's F1 project leader Yusuke Hasegawa conceded reliability upgrades appearing to work on the dyno are not translating to the track, and it does not know why.

McLaren remains at the foot of the constructors' championship with five race finishes out of a possible 14 so far this season, and has also had a slew of problems in practice and qualifying sessions.

Three of those finishes have been with Vandoorne, including his 14th-place in Montreal.

"It's a bit of the same old story, which is something that needs to get fixed one way or another," Brown said.

"Because we can't keep doing this. [Alonso] was clearly going to get our first - not even points - but point.

"It was good to see Stoffel make it to the finish. But I'm just speechless.

"You feel like you're finally going to get your first point of the year, and a couple of laps from the end, it goes.

"All we can keep doing is pushing for developments. Nothing changes - it just increases the frustration.

"But as we've said, we've got to get our act together, and it's one more race that we didn't."