Fernando Alonso says his quality of life has improved since leaving Ferrari, even though his Formula 1 switch to McLaren has not delivered the results he wanted

The Spaniard was contracted to Ferrari until the end of 2016 but quit two years early, having finished second in the championship in three of his five seasons, frustrated by the near misses and doubting its potential for progress.

Alonso knew McLaren would not deliver instant results as Honda returned to F1 but its failure to make the step needed to challenge at the front after three years has not been easy for him to accept, even if he says he is happier away from Ferrari.

"We would like to be more competitive, that's for sure," he said.

"At least in the years that I had a contract [originally with Ferrari] - 2015, 2016 - I'm still thinking that I took a good decision to come to McLaren.

"I learned many things. I worked with one of the best engineers that I ever worked with here in McLaren that currently we have in the team.

"I learned so many things, and there [at Ferrari] arrived the time that it was too stressful not to keep winning.

"The quality of life improved for me in the last two years, despite the results." 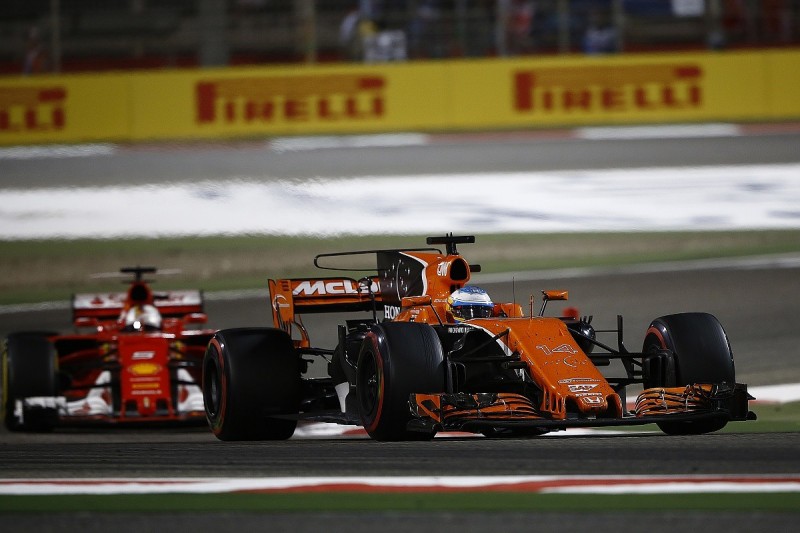 Alonso's Ferrari replacement Sebastian Vettel won three races in 2015, and has two of this year's first three grands prix to lead the championship heading into the Russian Grand Prix.

However ALonso insists it is wrong to suggest Ferrari's success means he should have never left, and that he still has no regrets about the move to McLaren.

"I didn't have a contract for this year," he said.

"Even in 20 years time, Ferrari will keep winning, and hopefully they won't ask if Alonso was right or not to leave Ferrari. I will be 75 years old!

"I drove five years there. They won before, they won in my time, and we were fighting for the world championship until the end.

"They won a couple of races the last two years, they are winning races now, and they will win races and championships in the future.

"So it's not always if Fernando did well or not.

"I'm super happy with my career, I was always in a competitive car, thank god, and I had an opportunity to reach things."