McLaren expects Fernando Alonso to stay in Formula 1 in 2018

McLaren thinks there is a very good chance Fernando Alonso will remain in Formula 1 next year, following an encouraging private dinner between team chiefs and the Spaniard at Silverstone

Alonso is out of contract for next season and has limited options outside of McLaren to land a competitive seat in F1, with no realistic chance of securing a move to Red Bull, Ferrari or Mercedes.

That situation has prompted talk that Alonso could take an F1 sabbatical - potentially switching to IndyCar for a year - before plotting a return to a top-line grand prix seat for 2019.

But McLaren executive director Zak Brown has suggested that, following talks during dinner with Alonso on Friday night, the Spaniard's focus is very much of remaining in F1 in 2018.

When asked what chances he reckoned there were of Alonso remaining in F1 next year, Brown said: "Very good.

"We had a great dinner with Fernando, and he even picked up the bill.

"We have a good understanding with Fernando, and he loves the environment [at McLaren].

"Stoffel [Vandoorne] is also doing a great job, given very difficult circumstances for a rookie, so I like where we are on the driver front." 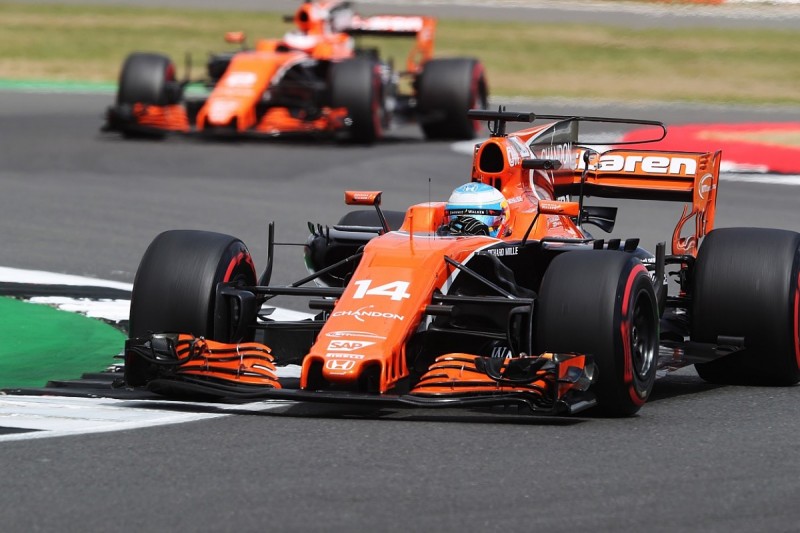 Asked about if there was any consideration for McLaren to run an IndyCar assault for Alonso in 2018 while it gets it F1's situation in order, Brown said: "He loved IndyCar.

"He definitely wants to go back and do the Indy 500 when the time is right, but he has made it very clear that he wants to be in F1 next year.

"I think the chances of him being in IndyCar next year are highly unlikely."

Brown said that one of the key decisions that McLaren needs to make is what to do about engines, as talks with Honda about their partnership remain ongoing.

"The relationship with Honda has been and remains fine on a personal level, but as we have made it widely known and everyone would agree, we need a much more competitive powerplant next year and that is the conversation we are having," he said.

"We are continuing to have conversations with them on how we are going to get more competitive next year."

Asked about whether the uncertainty now about the Sauber-Honda engine deal made McLaren's engine decision more complicated, Brown said: "It doesn't. Whatever Sauber does or doesn't do doesn't impact us.

"We are focused on our needs. I am not worried about the changing landscape of other racing teams."

Mercedes moves to end speculation over its future in F1