Verstappen had outpaced his nearest rival, Ferrari's Charles Leclerc, by three tenths of a second in Friday practice at Sochi, and looked able to match the Ferraris and Mercedes over a long run.

But he ended up seven tenths off Leclerc's pole time in qualifying, and while he swiftly worked his way back towards the front in the race after serving a five-place grid penalty, he wound up posing no threat to the podium finishers even after a late safety car bunched up the field.

He described the race as "pretty boring" and his fourth place, 14s from victory, as "definitely the best" Red Bull could have achieved.

Verstappen said his RB15 was "just not quick enough" to challenge those ahead, and felt the team was right to forgo a late pistop to go for the fastest lap point as it lacked both the tyres and outright pace to have taken the bonus.

Asked why he ended up less competitive than he had looked on Friday, Verstappen said: "Well, they [Ferrari and Mercedes] turned their engines up more than us. And, I think maybe they were not happy with their car balances - I was straight away quite happy with mine.

"Anyway this track is not suitable for us, so I guess it was just a really good Friday, where we nailed straight away the set-up, and for them it took a while to settle in."

Team-mate Alex Albon had a contrasting weekend, having looked well off the pace in practice and crashed in qualifying before recovering to fifth place from a pitlane start. 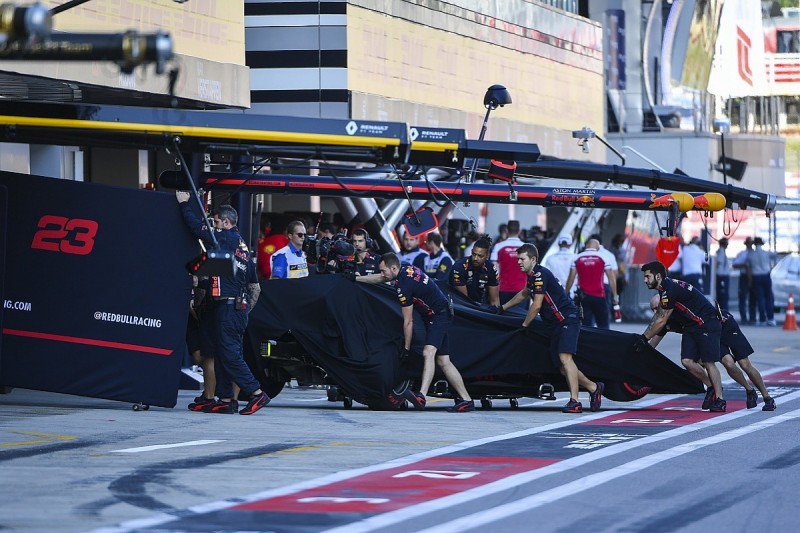 While the final result was aided by fortuitous virtual safety car timing, Albon was able to make steady progress through the pack, and sealed his second top-five finish in F1 with a late pass on McLaren's Carlos Sainz Jr.

Albon declared himself "happy after obviously a tough Saturday" and called his result "really the best we could've done".

He added that he was "a little bit fortunate with the safety car and everything like that, but still, the pace was there".

Having now contested four GPs for Red Bull since being promoted from Toro Rosso in place of Pierre Gasly, rookie Albon said getting up to speed quicker at the start of race weekends was now his target.

"It feels like at the moment FP1 is always a struggle, and it kind of gets better through the weekend, and then by Sunday it's normally more or less OK," he said.

"I just need to kind of get into that rhythm and that speed earlier in the weekend. It will come. Just [need] more laps.

"It was a tough weekend truthfully, but I'm happy with the progress."