Webber put in one of his strongest performances of the campaign as he shadowed Sebastian Vettel throughout the Brazilian Grand Prix.

And, having pulled off a brave overtaking move around the outside of Lewis Hamilton early in the race, Webber was praised by Red Bull team principal Christian Horner for giving his all to the end of his career.

"It was fantastic for Mark to sign off his F1 career with a really very strong drive," said Horner.

"I even said to him before the podium, 'are you sure you want to retire, as your move on Lewis around the outside was massively impressive?'

"But it is great for him to sign off while he is still at the top of his game."

Horner was instrumental in bringing Webber to Red Bull in 2007 and has helped him to the best results of his career.

Speaking about the impact Webber had on the team, Horner said: "The seven years that Mark has been with us has been an incredible journey for him and the team.

"He has grown since he has been here and it has been tremendous to see the success that he has achieved.

"He has played such a big part in our four constructors' world championships, and the development of the car.

"Adrian [Newey] and all the guys have enjoyed working with him, and the pace and the speed he has had has been extremely impressive. 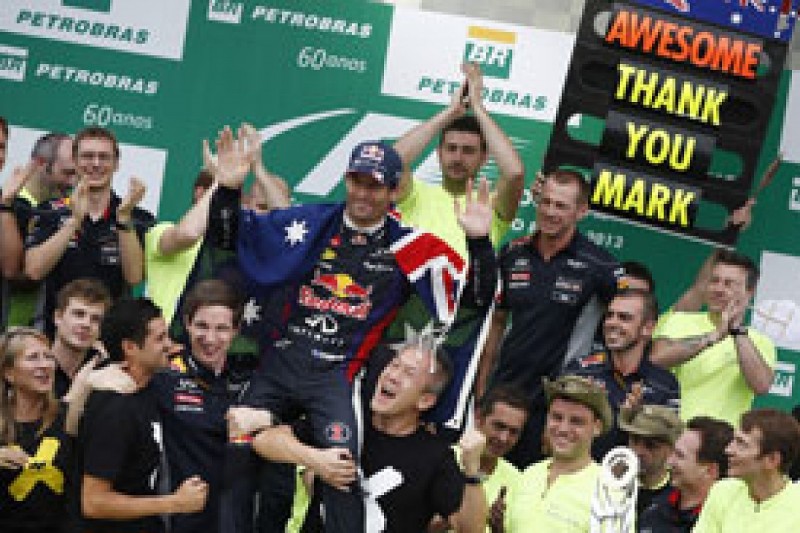 "It has been unlucky for him that he has had a team-mate called Sebastian Vettel, but I think the way he has signed off his F1 career - so many sportsmen you see going out with a bit of a whimper - shows he is still at the top of his game and signed off in absolute style."

Although there have been flashpoints between Webber and Vettel over the years, Horner thinks that it was all part of the way that the Australian got the best out of himself.

"People underestimate how good Sebastian is," he said. "Mark is a very, very fine racing driver.

"He has brushed himself down, he has got himself motivated, sometimes in a manner that might be uncomfortable for the team to deal with, but that works for him and he has got the absolute best out of himself."