Wolff has particularly felt that effect this season given the on-track clashes between the pair in Spain and Austria in particular.

It has resulted in lengthy debriefs, media interrogations and the imposition of rules of engagement he hopes both drivers will abide by in the future, although he concedes there are no guarantees.

"I look back at the first half of the season as positive because winning almost every race is definitely what we had hoped to achieve," said Wolff, whose drivers won 11 of the first 12 grands prix before the summer break.

"But the controversies and rivalries are certainly something that are not always easy to manage.

"We accept that, and have knowledge this is something that comes due to the fact we have two number one drivers who are provided with equal material and equal opportunity.

"But it consumes a lot of our time and that could have an effect long term.

"On a positive note, as long as it doesn't happen every race weekend, it has provided some of the narrative for this year's championship.

"My feelings, though, are clear: I'd rather avoid it and some of the headlines, and rather just win the races, but I guess we are in the entertainment industry."

Wolff believes the risk of an incident is higher while Hamilton and Rosberg have little threat to their dominance. 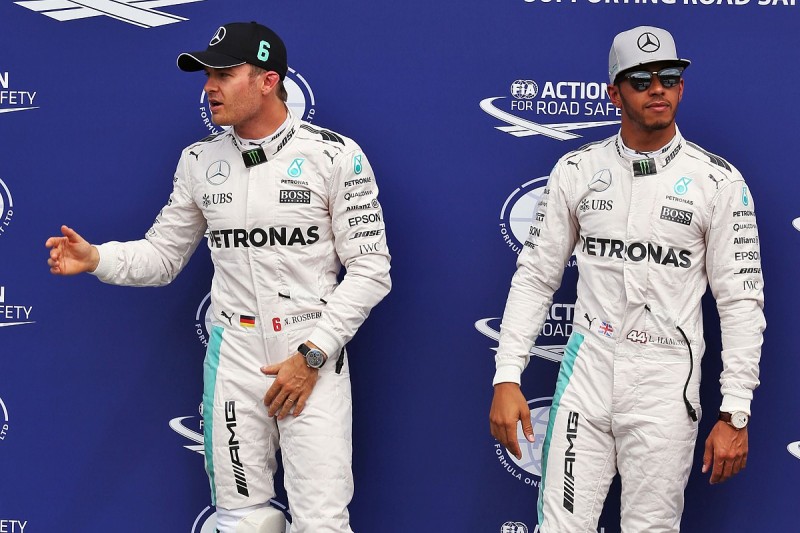 "If the team-mates are always on the same row of the grid, and that happens to be the first row, and it's about winning races and the championship, that can spill over," added Wolff.

"Next year it could be totally different. It could be a battle between four or six drivers or more.

"Obviously then your two drivers would be split most of the time, so it is a nice problem to have, but sometimes a tiring one."

After three and a half seasons of his drivers' rivalry, Wolff has to cope with a further two and a half years, with both now contracted to the end of 2018 following Rosberg's recent new deal.

Wolff at least feels the "upsides outweigh the downsides", but added: "Fighting for a championship in a competitive car, I'm actually quite proud of how we have managed it.

"We've made it last four seasons. If you look at some of the other examples in history, they haven't made it last more than two years.

"But you need to balance constantly between the positive effect it has in terms of performance, with two great drivers constantly pushing each other to new levels, and making the car go quicker.

"The downside of the rivalry is that it always bears the risk of spilling over into the team and damaging the spirit of the team, and that is a balance we permanently do.

"At the moment it's still positive."

When the FIA tried to block Raikkonen's debut