The session was red-flagged and ended just under 10 minutes early when Romain Grosjean crashed his Haas heavily having hit the drain cover.

Replays showed the Grosjean hit the cover on the Turn 12 inside kerb, after it had been flicked up by Valtteri Bottas's Mercedes, with his right-rear.

That destroyed the tyre and pitched Grosjean off the track and into the wall.

The drain cover was subsequently removed by a marshal, with FIA F1 race director Charlie Whiting and FIA safety director Laurent Mekies heading out to assess the damage.

After an initial inspection, and with a little under 10 minutes to go, it was decided the session would not be restarted.

Earlier, Vettel had clocked a 1m31.261s on the Pirelli super-soft compound tyres to finish the day 0.604 seconds clear of Raikkonen up front, while Mercedes had a scrappy session.

Following the morning rain, practice two was completely dry and teams quickly got to work on a mixture of medium, soft and super-soft tyres.

Vettel set the early pace on the soft tyre, clocking 1m32.456s, with Bottas running off track at the Turn 11 right-hander and skating into the gravel before returning to the pits.

Moments later, Lewis Hamilton dipped the first kerb at the Turn 7/8 double-right and lost the rear, pitching him into a spin and across the gravel. He was also able to rejoin and return to the garage. 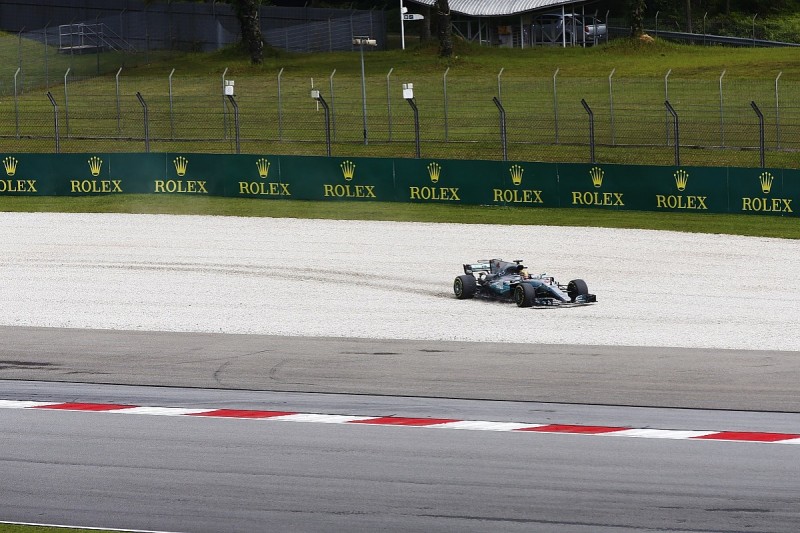 Max Verstappen was the first driver to turn his attention to a qualifying simulation, bolting on the super-softs and improving to second, 0.283s off Vettel's leading time on the soft.

Daniel Ricciardo then went quickest on the super-softs with a 1m32.099s, but his time as the top was shortlived as Raikkonen and the Vettel went quicker still.

Mercedes got both drivers back out after their trips into the gravel, but Bottas could only manage fifth, 1.459s adrift of Vettel.

Hamilton was only able to go fractionally quicker to slot into fifth, and both were demoted a position when Fernando Alonso put in an impressive lap to go a tenth faster and slot his McLaren-Honda into fifth behind Verstappen.

Attention then turned to long-run data gathering in the final third of the 90-minute session.

Force India got two cars in the top 10, with Sergio Perez and Esteban Ocon sandwiching Renault's Nico Hulkenberg in eighth and 10th respectively.

Felipe Massa made up for failing to set a lap time in the morning by clocking up 20 laps and achieving the 12th fastest time, two places and four tenths quicker than Williams team-mate Lance Stroll.