Rosberg, who has won the last three races to regain the championship lead by eight points from Lewis Hamilton, led the way with a lap of 1m35.227s, finishing 0.494 seconds clear of his Mercedes team-mate.

But the main drama came just seven minutes into the session when Magnussen was forced to leap from his Renault after it burst into flames upon completion of his second installation lap.

But just as it appeared to have been doused, it erupted again as a flammable liquid was seeping from the airbox.

Attempts to remove the engine cover were thwarted as that part of the car continued to reignite, forcing the FIA to red flag the session.

Mechanics managed to attach a hose to the fuel connector in a bid to drain the car, its yellow livery turning white given the amount of extinguisher foam needed to control the flames.

The mechanics eventually managed to take off the engine cover and apply cooling fans before finally wheeling the car back into the garage 15 minutes after the fire had started. 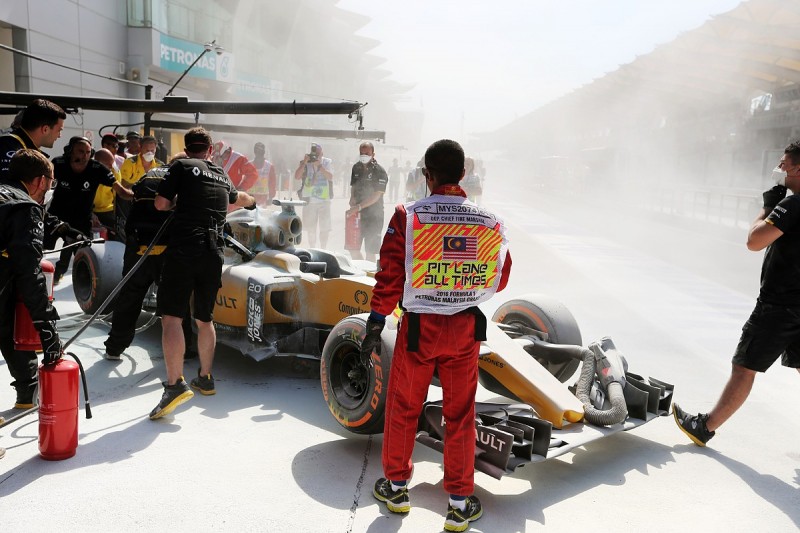 Overall, 20 minutes were lost before the session was restarted.

Ordinarily, teams are forced to give back one set of Pirelli tyres after 40 minutes, but given the circumstances that period was extended until 55 minutes in.

On a circuit resurfaced earlier this year, Rosberg was the first to post a representative time of 1m35.793s, with Hamilton's first flier just five thousandths of a second adrift, with both on soft tyres.

Rosberg then lowered his best time by over half a second with a lap that would remain unbeaten in the session, leaving Hamilton some way off his pace.

It was not an error-free session for Rosberg, as he ran wide and onto the gravel at Turn 11 with 16 minutes remaining.

Toro Rosso's Carlos Sainz Jr had done likewise at the same spot earlier in the session, visiting the gravel and then the grass before finding an escape route back to the track.

Ferrari duo Kimi Raikkonen and Sebastian Vettel finished third and fourth, both just over a second back on soft tyres, with the latter having bemoaned severe vibrations under braking soon after the session restarted.

McLaren's Fernando Alonso, who will take a 30-place grid penalty on Sunday for a power unit change, was fifth quickest, 1.383s back, ahead of Red Bull pair Daniel Ricciardo and Max Verstappen, whose best laps were on medium tyres.

Force India duo Nico Hulkenberg and Sergio Perez, along with the second McLaren of Jenson Button, completed the top 10, with the trio all over two seconds down.