The reigning three-time world champion appeared for his regular Saturday evening slot with the media at Suzuka, and started things off by saying he had something "not good" on his mind.

He added: "I'm not actually here to answer your questions, I've decided.

"With the utmost respect there are many of you here who are super-supportive of me, and those of you will hopefully know that I know who you are.

"But there are others, unfortunately, who often take advantage of certain things.

"It was just a little bit of fun.

"But what was more disrespectful was what was then written worldwide.

"Unfortunately there are some people here and it's not them [that have written negative things], and unfortunately the decision I take affects those who have been super-supportive, so that's why I'm saying with the utmost respect.

"But, yeah, I don't plan on sitting here many more times at these kind of things, so my apologies, and I hope you guys enjoy the rest of your weekend."

Hamilton's words were in response to the reports that followed his actions during the official driver press conference on Thursday at Suzuka - and after explaining his point of view to the assembled media on Saturday he left the briefing without taking any further questions. 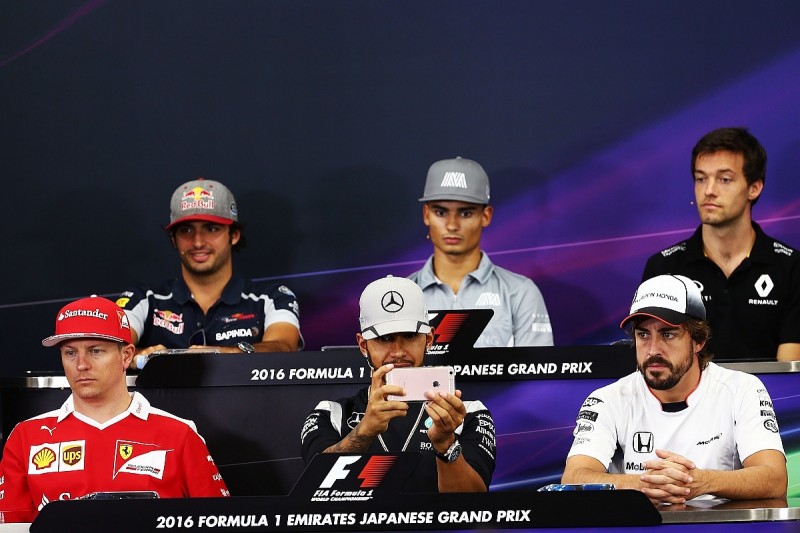 With questions being asked to other drivers around him, Hamilton was uploading pictures he was taking on his mobile phone to his Snapchat account, including one of himself with cartoon rabbit ears, whiskers and a carrot, and with the message: "This shit is killing me."

A further picture followed of Carlos Sainz, who was sat behind him, complete with a fox's ears and nose.

With the press conference being beamed live, Hamilton was asked to share what he was looking at, to which he replied: "It's quite funny. Just some snaps of us drivers.

"We've been doing this [the FIA press conferences] a long, long time and it's the same each time so got to keep adding new things to it."

Asked after practice on Friday for his thoughts on what Hamilton had done the day before, Sainz said: "I understand both sides.

"I know when I go to a dinner, and when I speak with my dad on the phone, he doesn't like it.

"The same as I understand you guys didn't like asking a question to Lewis and with him on the phone.

"But I also understand he has been doing this for 10 years, that the press conferences have been the same, that he perfectly knew what they were going to ask him - his engine failure and whether he trusts the team or not.

"I understand the position behind the cameras and in front of the cameras, and not because I want to be politically correct."

Ricciardo says engine was 'bleeding' power in qualifying at Suzuka

Mercedes engines not running as 'spicy' at Suzuka after failure