Having retired 15 laps from the end while on course for victory at Sepang, an emotional Hamilton claimed he was the only one of the eight Mercedes-powered drivers to have had any engine problems in 2016.

"Someone has to give me some answers because it's not acceptable," he said in the immediate aftermath.

"We're fighting for the championship and only mine are failing, that doesn't sit right with me."

Despite his driver pointing fingers at Mercedes, Wolff said he understood Hamilton's reaction.

"Every remark, every answer is allowed after such a frustrating moment," he said.

"If you were in the lead of that race and you were just about to get back in that championship and your engine blows up, and then someone puts a microphone in front of your face... he is allowed to say whatever he wants.

"This is the emotion, and completely understandable. Each of us would express his frustration in different ways.

"And there is no explanation. We came together afterwards, sat down and said 'how is this possible?'.

"It's a freaky situation that has no rational explanation, and after recovering a bit he will see that, but in the heat of the moment that's no problem." 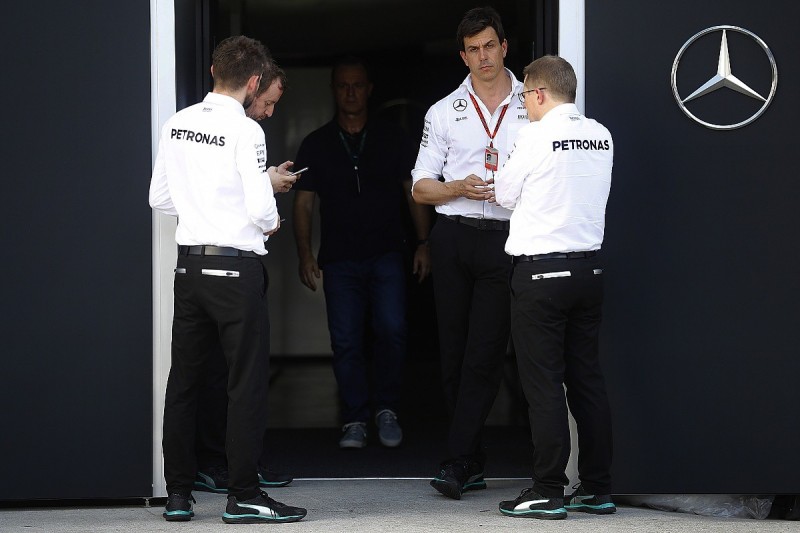 It later emerged Hamilton took the time to shake the hands of all those in the garage as the race continued behind him, while in a meeting in the engineering room at the circuit he delivered a rousing speech.

"It's been really bad for him and for the team, I have no words and I am gutted in the same way [as Hamilton]," added Wolff.

"But he came back into the garage immediately, and he went to see Bradley [Lord, director of communications], Niki [Lauda], myself and every single mechanic to say how he felt.

"Afterwards we had a discussion in a small group and we were all really down from the incident.

"Then we regrouped everybody, all the mechanics, engineers, and we had a chat to bring everybody up.

"He said some great things about the team and hopefully that is going to help us recover from Japan.

"Although being a driver, and very much frustrated and emotional about the situation, he was trying to pick up the team, which only the greatest do.

"In such a moment, to come out and put yourself in front of the mechanics and engineers, and find words to pick them up for the next race, and encourage them, it was really great."