But even though Red Bull, which beat Mercedes to the constructors' championship last year, had a disastrous test, Hamilton is not taking for granted that things will continue to be so positive.

Asked to sum up the team's week of testing, he replied: "It has been fantastic; really fantastic.

"[Mileage] is that biggest positive we can take from here. The car is reliable.

"We are not focused on anyone else at the moment, we are just trying to focus on ourselves and trying to improve and get as much data as we can, as many miles as we can and really try to take it one step at a time."

Contrary to the team's original plan, Hamilton returned to drive at Jerez this afternoon, completing 41 laps after taking over from team-mate Nico Rosberg.

This is because the 2008 world champion managed only 18 laps on the opening day after suffering a front wing failure.

TOO EARLY TO JUDGE PACE

Rosberg, who logged 91 laps, refused to make any judgements on the relative pace of the new Mercedes F1 W05, but was pleased with the reliability of the car.

"We just don't know where we are on pace; no idea," he said.

"With reliability and everything, it's been a decent mark up to now.

"I'm very pleased with that because that was the most important thing for this test.

"It did start quite tough for us, but the team did a really good job to turn it around and now we've really got the kilometres going with lots of laps." 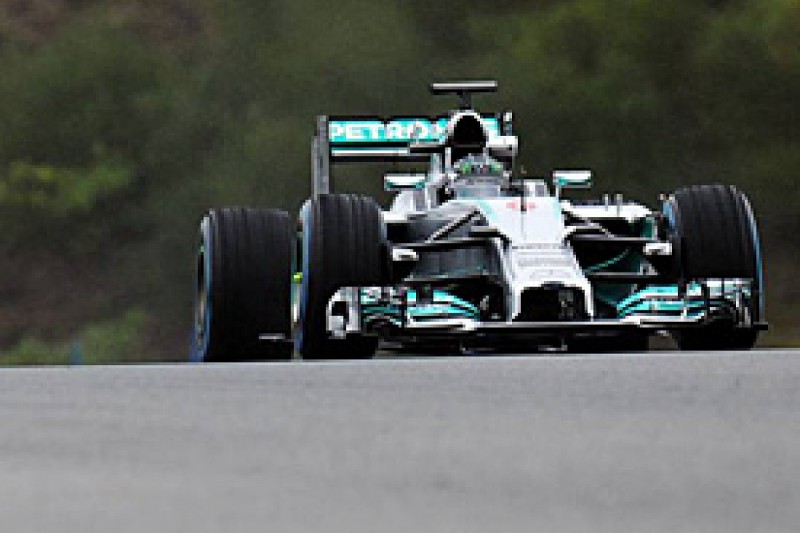 Rosberg added that the full potential of the Mercedes has yet to be seen given the focus on mileage and understanding the new engine package.

"Nothing is at potential, not even the driver because it's just important to do a lot of kilometres and then we'll push in Melbourne.

"Well we're always pushing for performance as well but the focus at the moment is on reliability, and then slowly but surely it needs to shift.

"But when, I don't know yet, it just depends on how the reliability goes."