Hamilton struggled under braking throughout practice and that continued in qualifying, where he trailed polesitter Nico Rosberg by 0.7 seconds on his first run and failed to improve on his second.

"Honestly, I can't really take you through it because I don't understand it all at the moment," said the reigning world champion of his struggles.

"There are several different things that could be the issue, I don't know just yet."

Mercedes boss Toto Wolff said the team "failed" to give Hamilton a car he could perform in.

"Lewis's car was not where it should have been after free practice one," he said.

"It's not easy to find the right compromise between the set-up of the car and getting the tyres in the right window and giving the driver a confident feeling.

"Here we failed. He didn't have a car today that was able to extract all the performance."

Wolff said Hamilton's lack of running - he lost time on Friday because of a hydraulic valve problem - meant he found it hard to find the right set-up direction.

"You cannot just guess," he said. "The approach he chose was probably right.

"He stayed where he was without deciding on a particular avenue.

"It was just down to the lack of running." 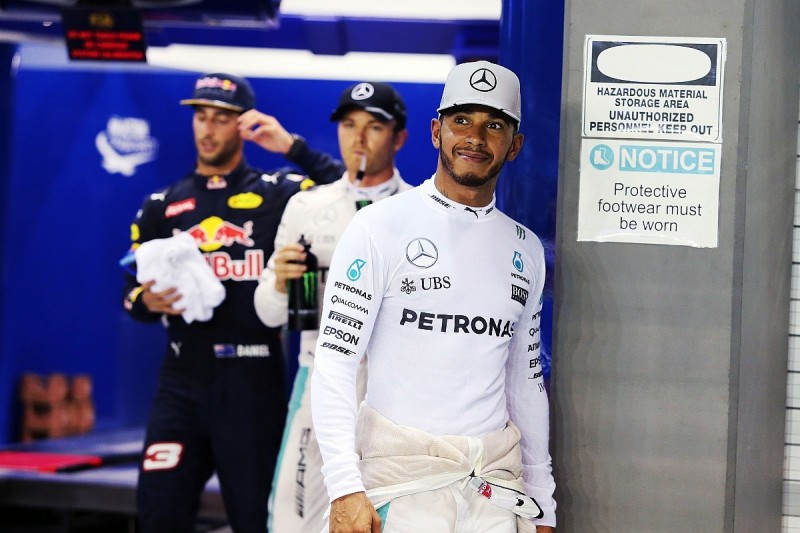 Hamilton said the time lost on Friday was "more valuable than I thought" but remained hopeful of at least scoring a podium as he starts behind Rosberg and Daniel Ricciardo.

"I should be able to still hold position," he said. "Getting past Daniel, it'll be pitstop or safety car - it's the only way to get past.

"I'll try to get him at the start but if I don't I'll have to try and stay close behind, but their tyres should be able to go longer and they have more downforce as well so they are in a very strong position."

Wolff said he was "proud" of his team for finding the "root causes" of the problems that left it off the pace in Singapore last year.

"Perhaps the severity of our lack of performance last year opened up a new way of thinking," he added.

"Last year after the race when we had the situation of crisis we discussed it and we had the worry it would maybe drag on into Suzuka and the following races.

"We kept our heads down and a small designated group looked at the data for two days and then parked the topic and concentrated on Suzuka.

"This is now the proof that we have understood where we had the weakness of the car."