Leclerc lost a third straight F1 win after Ferrari pitted team-mate Sebastian Vettel first in the Singapore GP, to try to get Vettel ahead of Mercedes' Lewis Hamilton into second place, and an unexpected 3.9-second gain on fresh tyres allowed Vettel to jump Leclerc as well.

Leclerc said Vettel's one-lap "undercut" was not planned before the race and this "will be one of the discussions too, to try and understand why we didn't speak about that situation before".

He said in the future he will make sure he is better informed during the race itself.

"I don't think I could have done much things better or differently," he said.

"The only thing, probably, is I will ask a bit more about the strategy around me.

"Because I was not aware [Vettel was going to pit earlier], so I don't know if I should have pushed a bit earlier during my first stint.

"I don't know, we have plenty of data anyway and I will analyse it."

Leclerc stressed that it was unlikely he would have been able to react with a faster in-lap had Ferrari predicted he would be racing his team-mate for the lead.

"At that time obviously the tyres were quite dead but probably before I had quite a lot of margin," he said.

"In the first few laps, obviously we wanted to go as slow as we possibly could for the guys behind to not have the window to pit.

"In that period I could have done a much better job but I stick to the plan and I think that's what helped us to do one-two."

Leclerc decried the situation as 'unfair' during the grand prix and said in the official FIA press conference after the race that although he had started to "see things maybe a bit differently, I still need some explanations just to understand fully why this decision was taken". 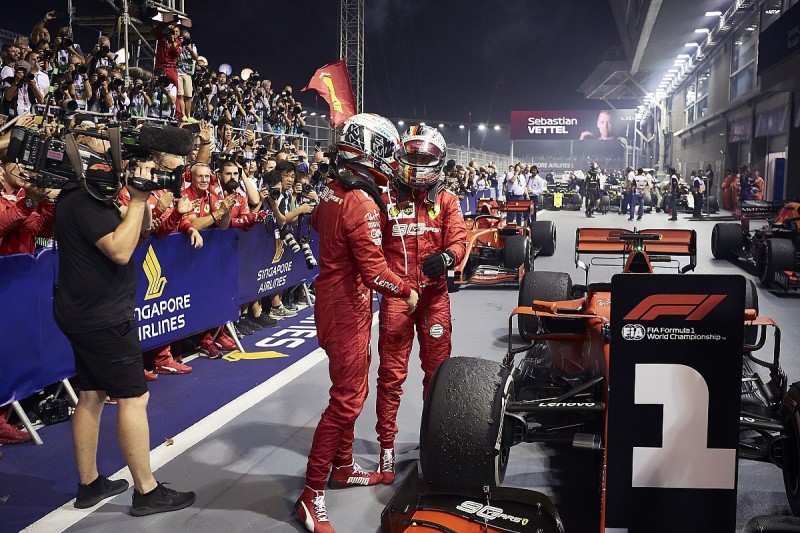 Ferrari did not have time to complete a full post-race debrief before Leclerc addressed written media on Sunday evening, as its drivers had been speaking to TV crews and then participating in the FIA press conference.

However, Leclerc had already cooled down further, and accepted Ferrari's admission that it was "surprised by how powerful the undercut was" for Vettel, as Ferrari expected Leclerc to rejoin in the lead.

"As I said in the car it was very frustrating, but now out of the car I understand a lot more the whole situation," said Leclerc.

"I am extremely happy for the whole team, very happy for Seb too. He deserves it, and now we'll move forward.

"Obviously I wish I was one step higher [on the podium], but it's part of life sometimes it goes that way and I'll bounce back stronger in Russia [next weekend]."