Charles Leclerc believes the five-second time penalty that dropped him to third at Suzuka was “the right thing to do” by the Formula 1 race stewards.

Ferrari driver Leclerc found himself coming under increasing pressure from Red Bull’s Sergio Perez in the battle for second through the closing stages of Sunday’s Japanese Grand Prix.

Under braking into the Casio Triangle on the final lap, Leclerc ran deep and cut over the kerbs when rejoining the track ahead of Perez. He crossed the line three-tenths of a second ahead, but the stewards swiftly ruled that Leclerc had gone off-track and gained an advantage, resulting in a five-second penalty that dropped him behind Perez to third.

PLUS: 10 moments that won Verstappen the 2022 Formula 1 title

Ferrari team boss Mattia Binotto said he was “very surprised” and “very disappointed” by the decision, particularly as Leclerc did not have the opportunity to argue his case with the stewards. But Leclerc himself felt the penalty was fair.

“I did a mistake, tried to minimise it obviously by trying to go straight,” Leclerc said.

“I was not aware this was the last lap. But five seconds penalty was the right thing to do, to be honest.”

Leclerc momentarily took the lead off the line at the start of the race, making a better getaway than Verstappen, only for the Red Bull to swing around the outside of Turn 1 in the damp and regain P1.

Following the rain delay, Leclerc struggled to keep up with Verstappen on the restart, eventually crossing the line over 26 seconds behind after 28 laps. 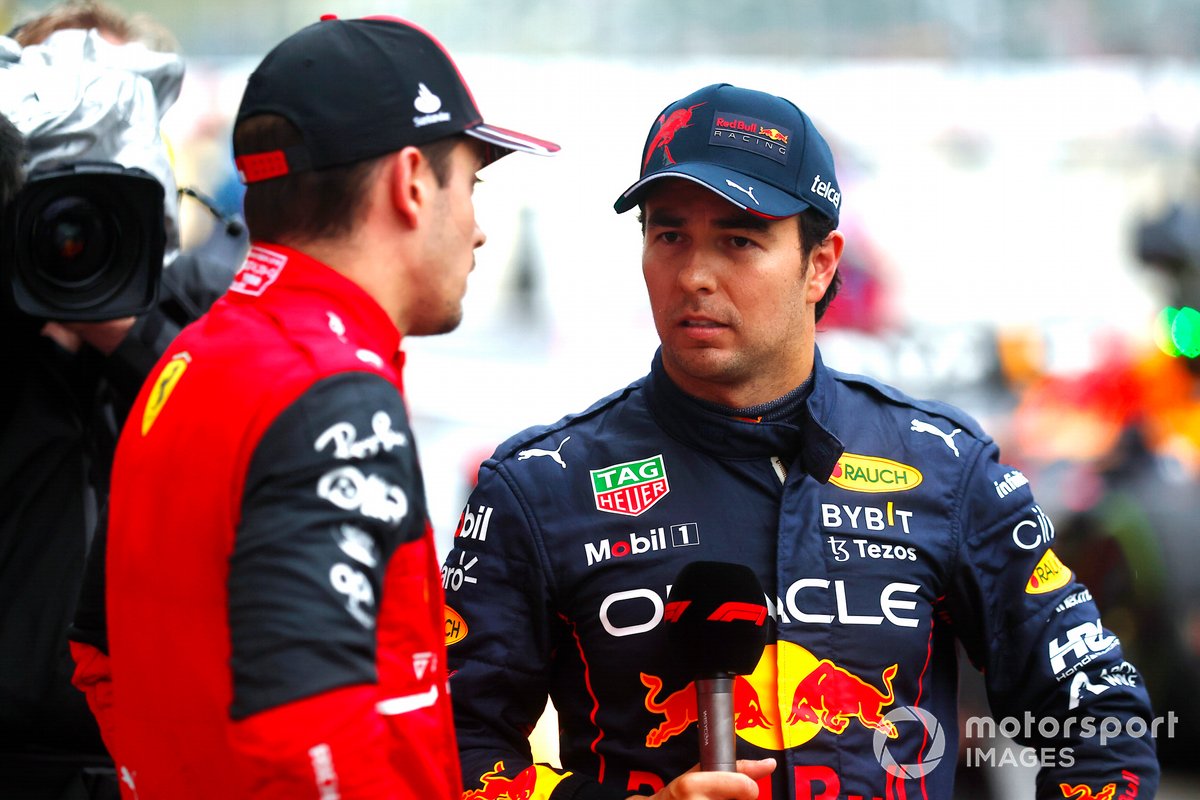 Leclerc said he was “very fast for four or five laps” before his front tyres struggled with degradation, causing him to slip back into Perez’s clutches.

“It was all about trying to survive until the end of the race,” said Leclerc.

“The end of the race was extremely difficult. Obviously Checo was putting quite a bit of pressure behind and I was really, really struggling with both of my front tyres.

“I ended up making a mistake, but we were really, struggling today.”

Binotto explained that it was “not possible” for Leclerc to recover his tyres after pushing early on, saying the team would go through what happened to understand the high levels of degradation.

“Maybe he was attacking a bit too much to try and close the gap, maybe destroyed [the tyres] and as a consequence, he had not any more the right pace for the following laps,” said Binotto.

“On the single lap, I think the pace and the speed was there. But in terms of tyre management, certainly we could have done something different.”