Leclerc lost the rear and hit the wall hard in the closing stages of Friday's second practice, leaving Ferrari with an extensive overnight repair job.

Remarkably, both the chassis and power unit were salvaged after the heavy impact, and Leclerc repaid his promise to thank his mechanics in “the best way possible” by qualifying fourth - ahead of Sergio Perez's Red Bull.

The 24-year-old survived another hairy moment at Turn 22 on his final Q3 lap to gain 0.2 seconds and split the Red Bulls.

“I don't think we could have expected anything more than that,” Leclerc said.

“It was a very, very good lap, and I'm very happy to be starting P4 tomorrow.

“Eyes closed is just an expression, I'm pretty sure I had my eyes open! But yeah, I lost the rear, and I honestly thought that the end will have been the same as yesterday.

“But this time I kept it on track, and made it stick. So I was very happy.” 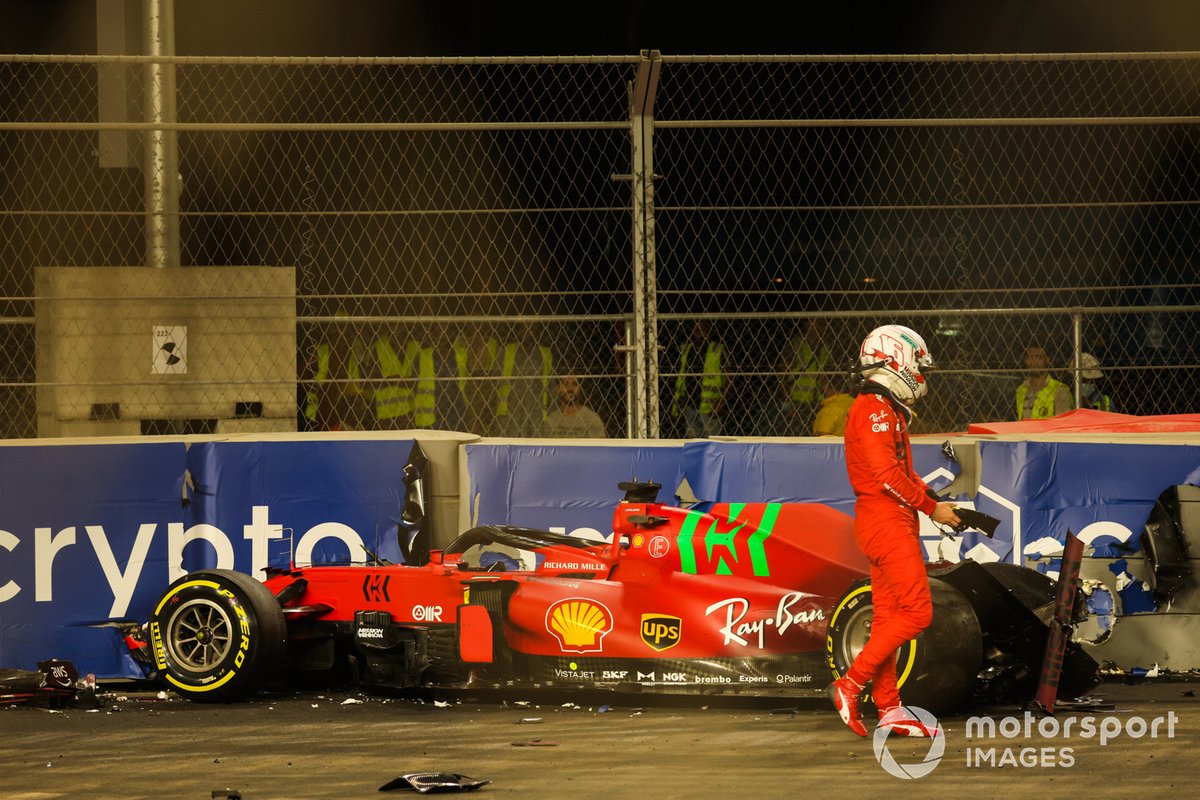 Leclerc, who took pole for the Monaco and Baku street circuit races earlier in the season, admitted that building up his confidence was key to his qualifying performance.

“The confidence in the streets circuits is what makes the most difference at the end,” he said.

“And overall, every time we managed to give me a car that gives me the confidence, which was very, very difficult here, especially with what happened yesterday.

“I just had to do step by step from the first laps of FP3 to the last lap in Q3. And in the last lap of Q3 I could finally put everything together and just go for it. And it worked out.

PLUS: What Ferrari still needs to improve to return to F1 title contention

“If you look at Turn 22, I think all day I haven't been very confident with what happened yesterday, and just in the last lap of Q3 I gained something like two-tenths against all of my other laps before. So I just went for it.”

Leclerc admitted that like team-mate Carlos Sainz Jr he struggled on the medium tyres in Q2, although his struggles weren't as considerable as the Spaniard, who was knocked out in 15th place after a lurid Turn 11 spin.

“I also had a very difficult Q2,” Leclerc explained.

“I think Q1, [Sainz] was probably more at ease with the car. And I also was, and then once we went on the medium, the car was just extremely tricky to drive, the rear was very, very difficult.

“But at the end, we managed to change a little bit the car on the second run of Q2, and it was a little bit better, and then I put it all together in Q3 with a soft.”

Leclerc admitted he didn’t feel 100 percent fit on Saturday morning, suffering from sore feet and an aching head, but was more surprised that the car could be repaired after an impact that “felt very, very bad”.

“I hit the rear first and the rear took all the shock, so if anything it's quite crazy the engine has nothing.

“The chassis then hit later on, but it was less of a shock for it. But yeah, it was quite quite a big one.”