The 26-year-old resisted intense pressure from Mercedes driver Lewis Hamilton in the closing stages of the race having passed him for fourth place after the first safety car restart on lap 37.

He then drove superbly to keep Hamilton at bay to match his career-best Formula 1 finish, at one stage repassing the Mercedes on the run to Turn 3 after being overtaken into the first corner.

"We really punched above our weight," said Hulkenberg.

"We shouldn't be in front of these cars but we are because we put everything together and we were quick in the important points [of the track].

"We were not expecting this [from the start] and we were looking backwards trying to defend against the McLarens, and we also knew there was Kimi [Raikkonen] and the Red Bull [Mark Webber] coming.

"But we had an opportunity today and we grabbed it."

Hulkenberg, who also had to battle hard to keep Fernando Alonso behind him during the first half of the race, admitted it was tough to absorb such pressure throughout the Korean GP.

But he did not make any mistakes and capitalised on the strength of the Sauber in the first sector to do so.

"It was demanding, a really tough race," he said when asked by AUTOSPORT how difficult it was.

"It was a long race with all the pressure. When I got ahead of him [Hamilton] I was not 100 per cent sure that I could stay in front but I knew there was some possibility because the traction was phenomenal today and we had mega top speed.

"These things together, combined with adapting the KERS boost plan, made it tough for them to pass." 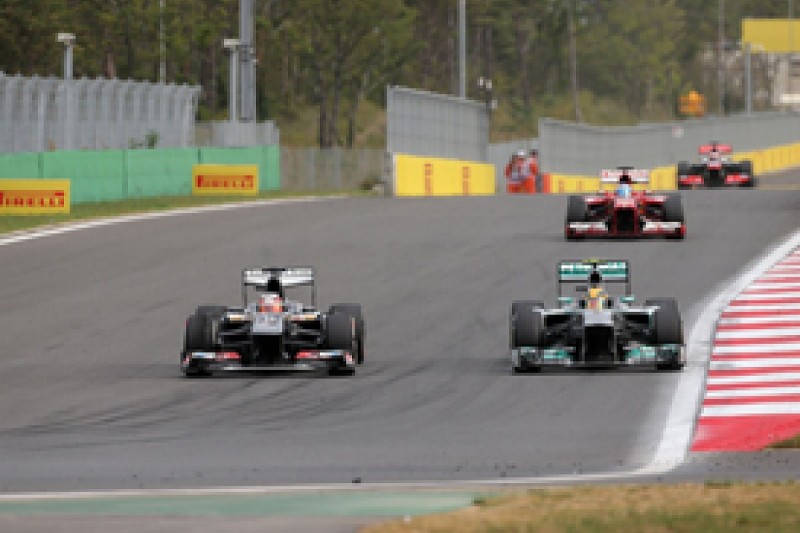 Most impressive about Hulkenberg's race was his willingness to leave the door open to Hamilton into Turn 1.

He had to do this because to defend would have compromised his exit onto the back straight and made him a sitting duck.

"You get into a rhythm, see where he is quicker, know his strengths and weaknesses and then you know what to do," said Hulkenberg.

"Here, sector one is all about getting the exit [onto the back straight] right and then afterwards it's difficult for someone to overtake.

"Lewis was all over me in sector three, he was so close sometimes.

"I thought, 'this car doesn't care about the dirty air' - it was amazing how close he could be in the last corner."