Renault Sport Racing president Jerome Stoll, a key player in the marque's resurgence in Formula 1 over the past five years, is to step down from his role at the end of December

The 66-year-old joined Groupe Renault in 1980, and served in various executive positions across the company as he worked his way up the ranks.

He became involved in Renault Sport on the marque's official re-entry to F1 in 2016 as the main link between the race team in Enstone, the engine division in Viry and the parent company.

Stoll was originally supposed to quit the role as Renault Sport president at the end of 2018, but his planned replacement Thierry Koskas left the company soon after being announced and Stoll agreed to continue for two more years.

This year, he helped to ensure that the manufacturer continued its support for F1 under the Alpine brand name into the next Concorde Agreement period.

As well as the F1 programme he oversaw all of Renault's sporting activities, including its successful Formula E programme that was taken over by partner company Nissan in 2018.

"These five years as President of Renault Sport Racing have been very intense," he said.

"Taking up the challenge of rebuilding an F1 team is tough, it takes time, commitment and unfailing determination.

"A first step has been taken with a team and drivers that we can now see on the podium. I appreciate the privilege of being able to be part of all these changes and all our progress. 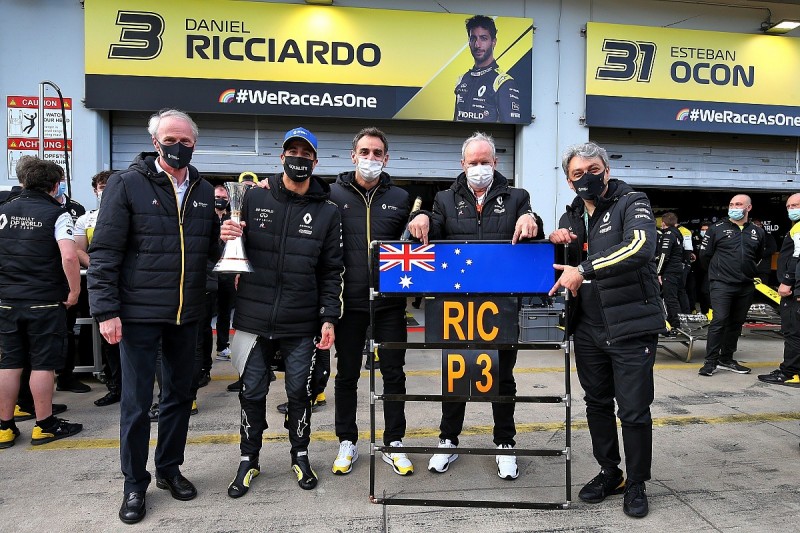 "Motorsport, and even more so F1, is above all a human adventure, encounters, bonds that are forged, joys, disappointments and invaluable rewards.

"A new chapter is now opening with Alpine and I am sure the best is yet to come. I am happy and proud to have been part of this great adventure with such great people."

"What a long way we have come together from the start of the project in June 2015 to this season's podiums," said Abiteboul.

"Jerome's passion for competition as well as his loyalty to the women and men of the team have been of invaluable help over the years.

"His support as well as his strategic vision have enabled us to overcome many hurdles and advance our ideas in an increasingly complex environment.

"Today, a new adventure begins with Alpine and the F1 team will be a major asset for the development of the brand."

"Jerome's connection to the company and his conviction that motorsport is part of the brand's DNA contributed to Renault's return to Formula 1 as a complete team," he said.

"His experience and expertise, acquired during his career at Renault, have been key assets in the structuring and progression of our F1 team."