The pair made contact in the final corner at Sepang after Palmer approached on a faster lap, tangling with the slower Verstappen who appeared to be on a cooldown lap.

Palmer damaged his front wing in the incident and Verstappen picked up a left-rear puncture, but no action was taken by the stewards.

The Renault driver said that Verstappen was to blame for the coming together as he stayed on the racing line.

"I was on a quick lap, he was on a slow lap," Palmer told Autosport. "The slow driver should get out of the way.

"You're not allowed to impede on a fast lap, but he stayed on the line so I went on the inside and braked 20m early and took a lot of caution, but then he also took his apex which I didn't expect.

"If you're trying to prepare the lap, you're normally wide there anyway. I don't really understand why he was on that part of the track. 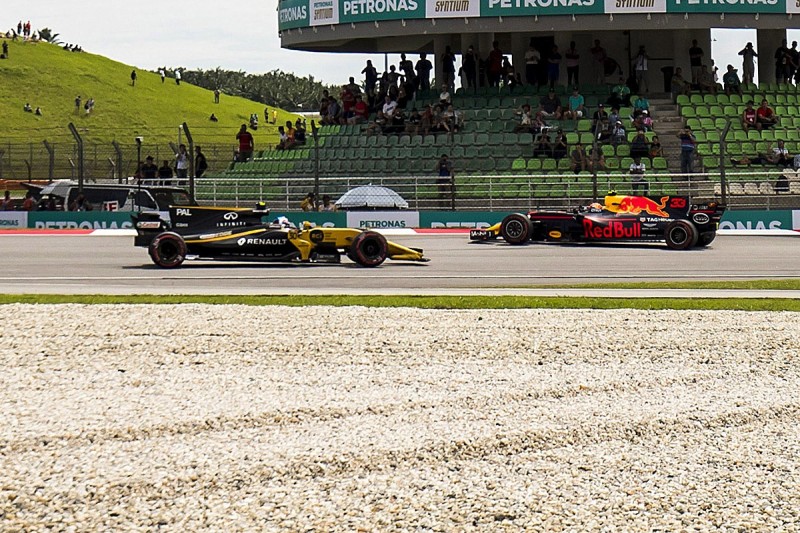 "If you're preparing for a lap, no-one is ever on the off-camber bit on the inside. Everyone is getting right to the outside and getting the best drive possible."

"It was a silly incident and you don't want that sort of thing in FP3."

When asked if his lock-up on entry to the final corner contributed to the collision, Palmer added: "I locked up in the end, but only because he was turning in.

"The data shows I braked 20m early and was in control, and as soon as he starts turning into me I had to hit the brakes more and lock-up to avoid the crash."

Palmer said that he and Verstappen disagreed over the cause of their clash, but that the Red Bull driver did not need to be penalised.

"His view is he is allowed to impede me, my view is it was silly for him to do that really," he said. "It's just a respect thing really, to respect my fast lap.

"This weekend I've let many people past in the last corner. If you're not far enough ahead, let them go because they're on a quick lap.

"Then you start the lap behind them, they do their fast lap and get out the way so everyone can be happy.

"I'm not fussed he didn't get a penalty because it makes no difference. I just think we need to learn from it, show more respect."