Ricciardo's left rear tyre made contact with the right front of Massa's Williams as he tried to squeeze between it and the Ferrari after making a faster start at Suzuka.

"It was another blinder," said Ricciardo of his start.

"It was actually too good. I didn't know where to go.

"I saw the gap and figured it would open up - that once I was there they'd see me in the mirrors and give me some space.

"I haven't seen a replay so I don't know. I guess there wasn't enough room, or they kept closing on me.

"It was a shame as I think I would have comfortably had both of them before Turn 1."

The Australian had to do a full lap with a puncture and could only recover to 15th place, struggling with some floor damage. 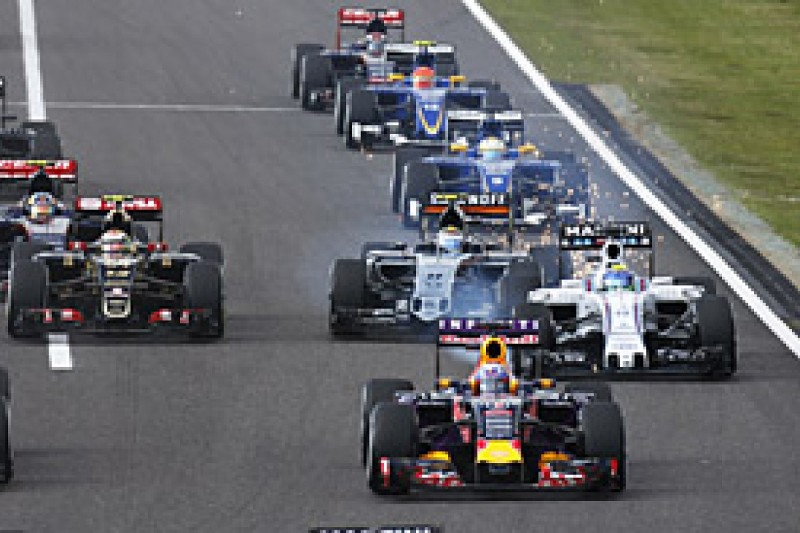 "It was a shame as Ricciardo had a good start and went for the gap and Massa moved a little bit," he said.

"It was a racing incident and the result was a puncture at the worst possible time."

After its second and sixth places in Singapore a week ago, Red Bull did not score at all in Japan.

As well as being ordered not to use overtaking engine settings to avert a potential reliability issue, Kvyat also struggled with what Horner described as "asymmetric brake temperatures" throughout.

"I was just a sitting duck all race," Kvyat said.

"I had problems with the brakes, the tyres and no overtake button, so it was complicated.