The Mercedes driver hit the front during the early running on soft-compound Pirelli tyres, setting a best time of 1m28.911s.

So strong was the pace of Mercedes that Hamilton's initial time would have been good enough for second overall at the end of the afternoon, with team-mate Valtteri Bottas the only driver to better it later in the session on supersofts.

Ferrari driver Sebastian Vettel was the first of the frontrunners to complete a qualifying simulation, posting a 1m29.257s to climb to second.

This was subsequently bettered by Red Bull driver Max Verstappen, who set a 1m29.050s despite later complaining that the car handled "like rallycross".

Bottas had a shot at going fastest, only to carry too much speed into the Degner 2 right hander and run wide at the exit. He aborted the lap.

Hamilton then completed his three-lap qualifying simulation run, banging in the fastest time of the session with a 1m28.217s - taking a bite of the grass on the run from the hairpin to the kink before Spoon Curve on the way while passing a touring Charles Leclerc.

Bottas did put a lap together at that point, outpacing Hamilton in the long middle sector that stretches from the approach to Degner 1 to the middle of the back straight, but overall he was 0.461 seconds slower.

That put him ahead of Vettel and Verstappen, with the second Ferrari of Kimi Raikkonen fifth and a massive 1.281s down.

Daniel Ricciardo was slowest of the drivers from the top six teams, just 0.015s behind Raikkonen. 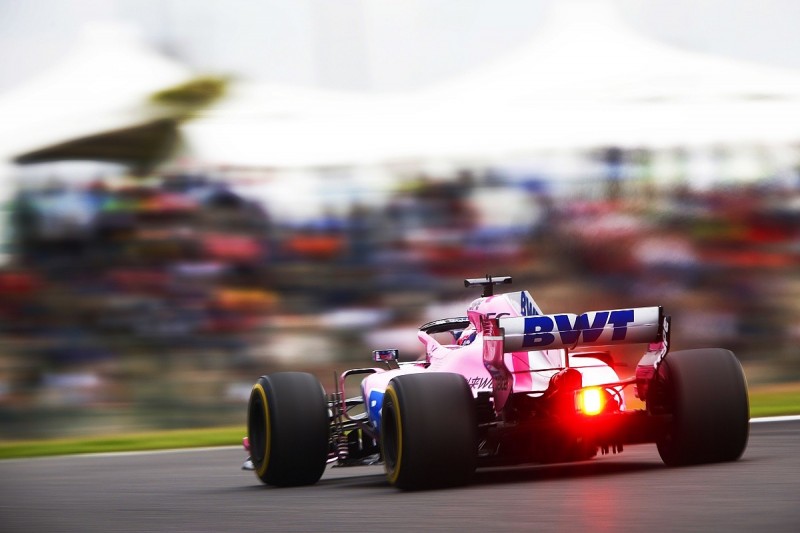 Esteban Ocon led 'Class B' for Racing Point Force India, posting a 1m30.035s that briefly placed him fifth after showing strong pace on mediums on the first runs.

That put him four-tenths faster than the Haas of Romain Grosjean, who pipped Sauber driver Marcus Ericsson by 0.038s.

Brendon Hartley, driving for Toro Rosso and benefiting from the upgrade 'Spec 3' Honda engine, rounded out the top 10, 2.285s off the pace.

Sergio Perez was 11th in the second Force India, missing out on the top 10 by eight-thousandths of a second.

They were split by Toro Rosso driver Pierre Gasly, who did not head out until the final quarter-of-an-hour after what the team described as a fuel cell issue.

He went straight into a performance run on supersofts, posting a 1m30.795s with 10 minutes remaining.

Sauber driver Leclerc had a scruffy session, which included a couple of off-track moments in the middle of Spoon Curve, and ended up 15th.

His first qualifying simulation lap was compromised by running side by side with Lance Stroll in the chicane and then his second was ruined by a wide moment at the hairpin.

Haas driver Kevin Magnussen was 16th ahead of McLaren's Fernando Alonso, who used soft Pirellis to set his best lap of 1m30.988s.

Williams pairing Sergey Sirotkin and Lance Stroll were 18th and 19th, ahead of the second McLaren of Stoffel Vandoorne.