The Red Bull driver converted his pole position into the lead at the first corner at the Buddh circuit and was always effectively in front, even though his pit strategy painted a different picture during the opening phase of the race.

Vettel started on Pirelli's soft tyres and was the first man into the pits for medium rubber at the end of the second lap.

Once Felipe Massa's Ferrari and the Mercedes of Nico Rosberg and Lewis Hamilton had got rid of their softs, Vettel's Red Bull team-mate Mark Webber was left in front while the German battled through the pack.

A combination of passing moves and pitstops for others quickly moved Vettel up from 18th to fifth. Despite being in traffic, he cut an 18-second deficit to Webber to one of less than 11s by the time the Australian made his first stop on lap 28 of 60.

By that point Vettel had passed Romain Grosjean's Lotus, Daniel Ricciardo's Toro Rosso and Sergio Perez's McLaren, meaning he retook the lead at this point.

Both Red Bull drivers made their final stops by lap 33, Red Bull employing a similar, short-stint strategy on softs for Webber.

Webber's 11s deficit to Vettel before those final stops became one of more than 13s after them, leading to the team instructing the German to ease his pace and protect his tyres.

It became irrelevant less than 10 laps later as Webber retired from second after suffering an alternator problem.

Webber's misfortune promoted Kimi Raikkonen to second, the Lotus driver attempting to make it to the finish with a 52-lap stint on medium Pirellis.

But the Finn could not hold off the two-stopping Rosberg, who used his DRS to ease into second with eight laps remaining. He finished 29s behind Vettel as Red Bull clinched the constructors' title.

Raikkonen's pace during the final few laps was over a second slower than those chasing him, including team-mate Grosjean, whose rubber was 46 laps old by the finish.

The Frenchman, who started 17th, pulled onto Raikkonen's tail with four laps to go and passed the Finn for third at the exit of Turn 4, only to cede back the place immediately to avoid a penalty.

Raikkonen let Grosjean by further around the lap to allow the Frenchman to to finish on the podium for a third straight race. He was then passed by Massa for fourth as they crossed the start/finish line seconds later.

The battling Hamilton and Perez were with Raikkonen a lap-and-a-half later, Perez using his DRS and KERS to pass both down the back straight and take fifth - his best result since joining McLaren last winter.

Raikkonen, who lost sixth to Hamilton during the same move, pitted for fresh rubber with just two laps to go, but was able to remain ahead of Paul di Resta and set the race's fastest lap right at the death.

Di Resta and Adrian Sutil made it two Force Indias in the points with Ricciardo completing the top 10. 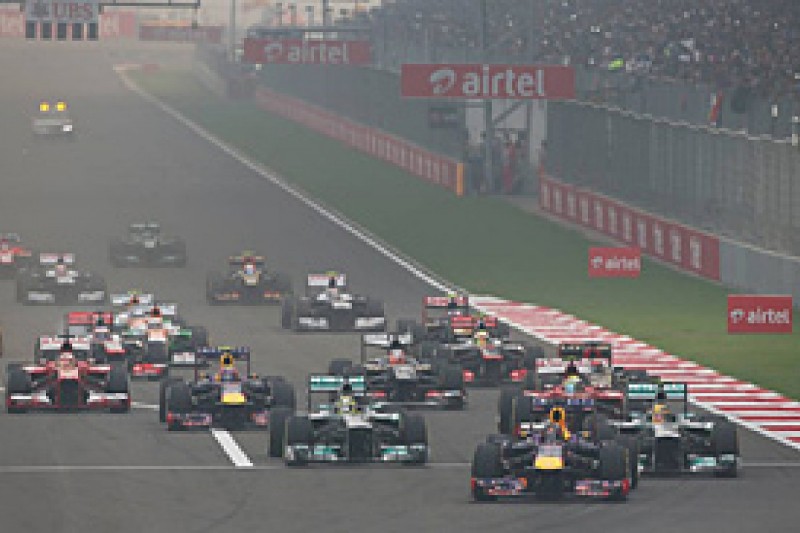 Fernando Alonso, the only man who arrived in India with a chance of denying Vettel the title, had a race fraught with incident.

He stopped early for tyres and a new front wing after clipping Webber's rear wing and damaging his nosecone at the exit of the race's first corner, and then banged wheels with Jenson Button two corners later.

The Ferrari driver spent his entire afternoon in the midfield and finished 11th after stopping three times. And battling with Ricciardo, Pastor Maldonado and Button late on.

Nico Hulkenberg drove strongly all weekend and was on course for eighth when he pitted near the end with a problem with the floor of his Sauber. He retired with three laps left..