Having concluded early on that its launch concept was going to be hard to extract peak performance from, Williams revamped its Formula 1 car entirely for the British Grand Prix.

The team conceded that, with more redesigned major components than original ones, this latest version of the FW44 could effectively be called a new car.

It only had enough spare parts for Alex Albon at Silverstone, and there were concerns his opening lap crash on Sunday had damaged them beyond repair and he could be forced to go back a step for this weekend.

However, the team has confirmed that Albon will again get exclusive use of the components at the Austrian Grand Prix, before both drivers get to run it from France.

Taking design cues from several other teams up and down the grid, Williams has abandoned its short, downwash-style sidepod solution for something much more conventional.

But, in doing so, it has been forced to address almost every other surface on the car too, in order that the aerodynamic daisy chain doesn’t have any breaks in it. That’s why it needed such an extensive overhaul – as changing just a single part of the car would not have worked.

This starts with the front wing, given this is the first surface that influences the airflow’s trajectory and offers balance to the rear of the car too. 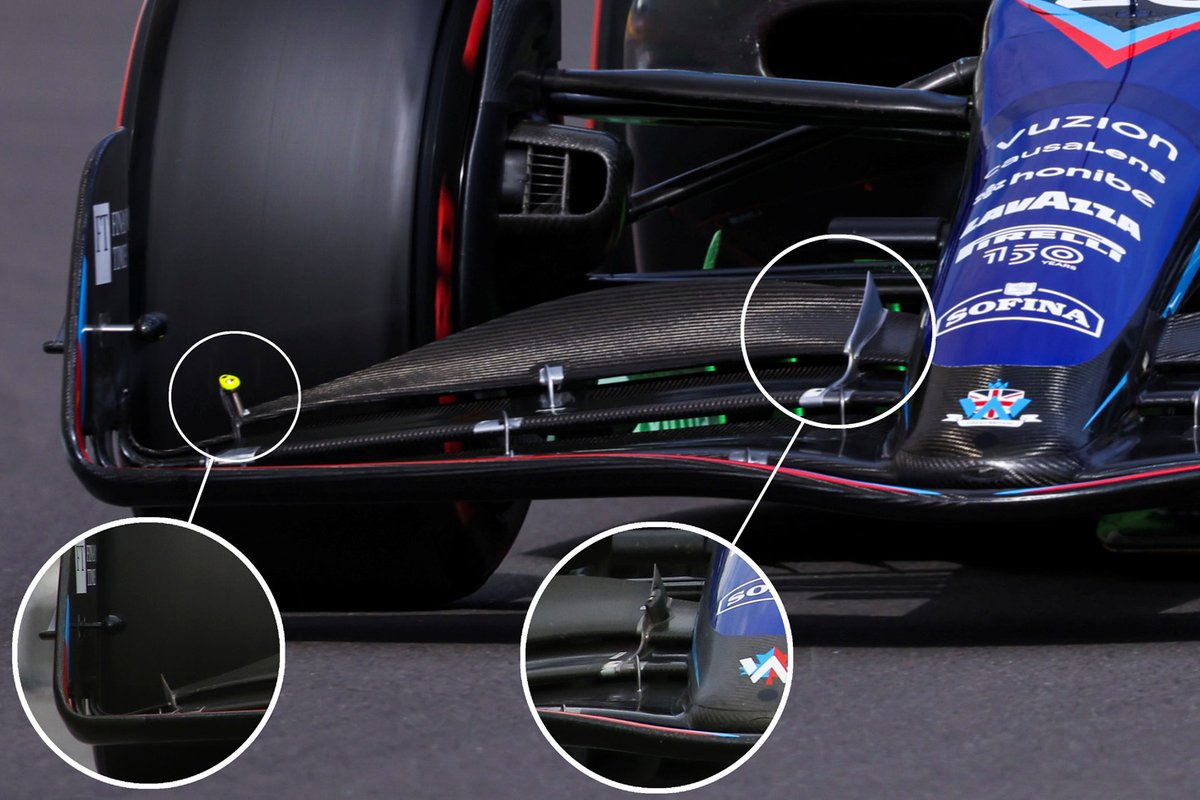 In this respect, Williams made changes to the flaps and the mounts and adjusters for it, which offers a wider working range in which the front wing can operate.

In order to achieve its goals here, the team has switched which end of the wing the adjuster is mounted, with it now set at the outboard end. This is in order that the teardrop-shaped pod can also be used to clean up the airflow ahead of the front tyre.

The most notable of Williams’ changes comes in the form of the new sidepod solution, with the team making a decisive change to its overall concept.

Having started the season with the short downwash ramp solution with an optional throughout, the new bodywork installed on Albon’s FW44 shared some DNA with both Red Bull and Ferrari’s solutions.

In order that these changes could be made, the team has altered the internal layout of the radiators, coolers and other related ancillaries. 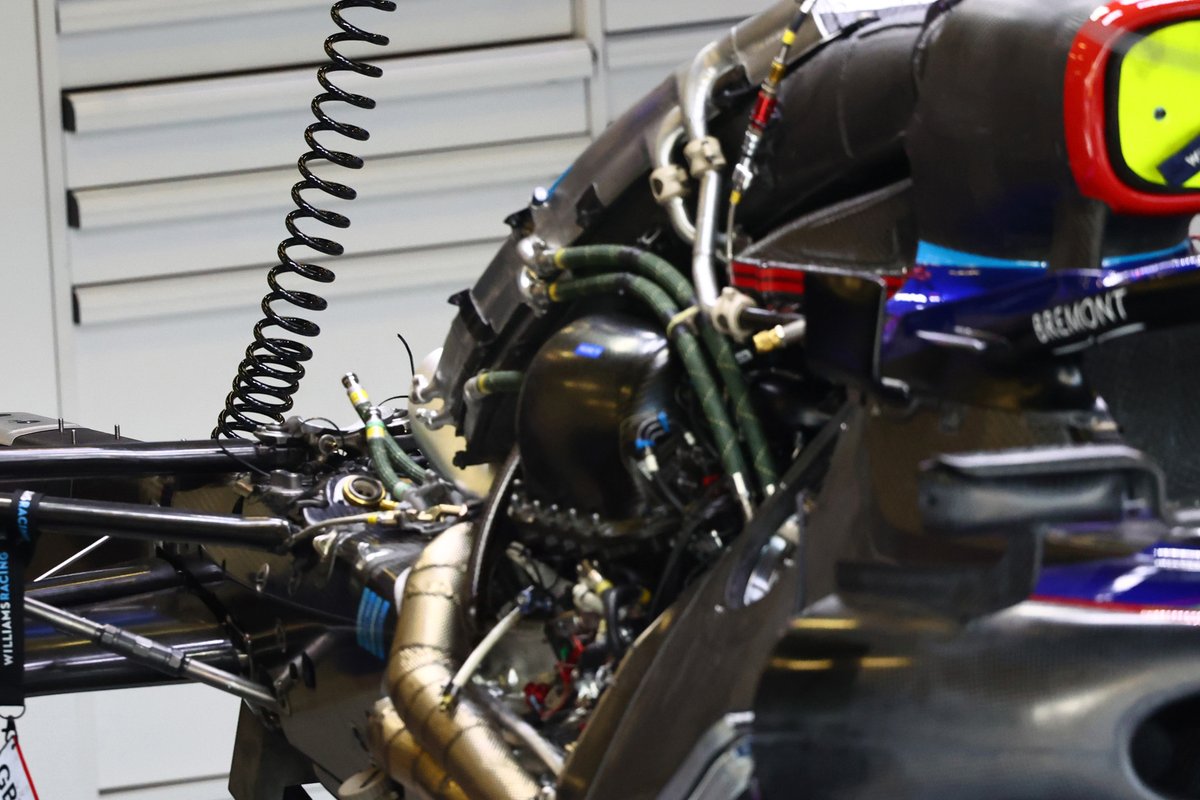 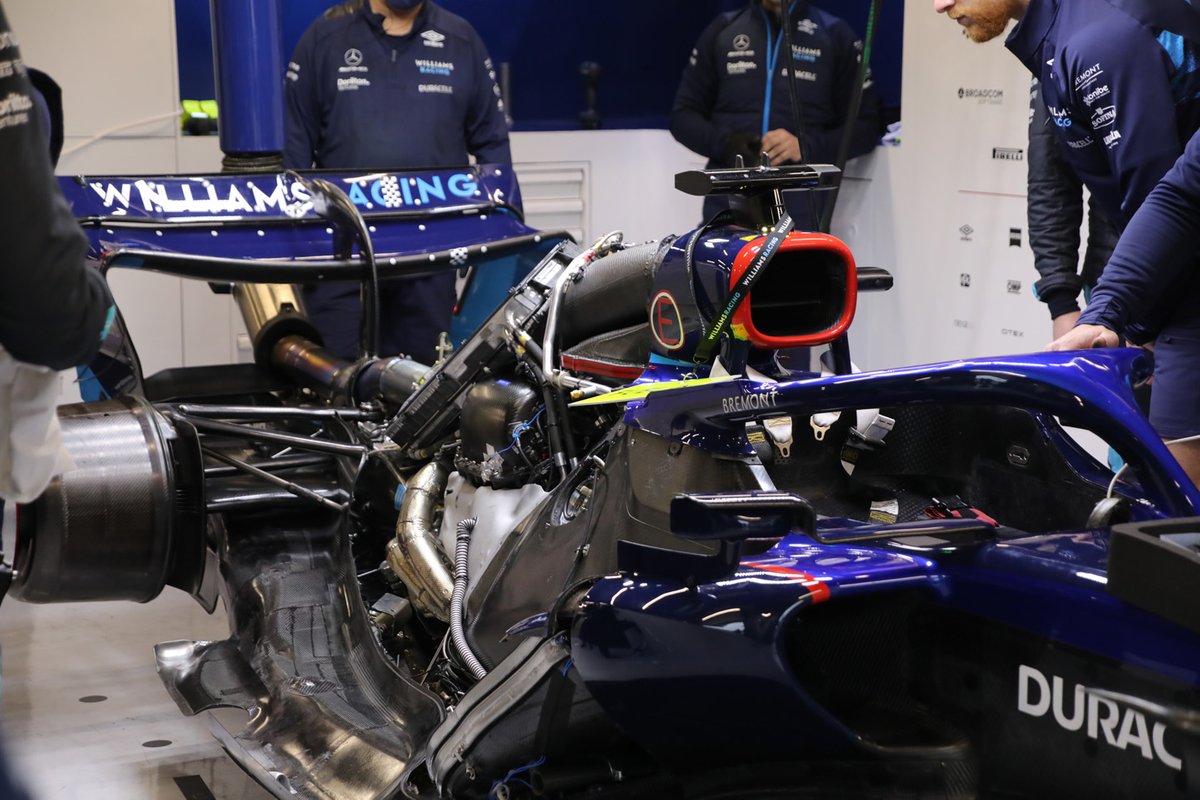 As part of this overhaul, the twin saddle cooler layout has been exchanged for just a single cooler, resulting in narrower bodywork being shrink wrapped around it.

Meanwhile, this has required that more space has to be found in the sidepods to accommodate that change.

In terms of bodywork, the front of the sidepod trades the more conventional sidepod inlet of the old design for a wide, shallow inlet and deep undercut. This is similar to the layout we see on the Ferrari.

Thereafter, the sidepod resembles the kind of design scheme seen over at Red Bull, with a down-washing ramp at the rear end to help draw the airflow passing by over the floor.

Above this, the cooling outlet has also been reprofiled not only to better serve the aerodynamic changes around it but also to help with the team's cooling targets. 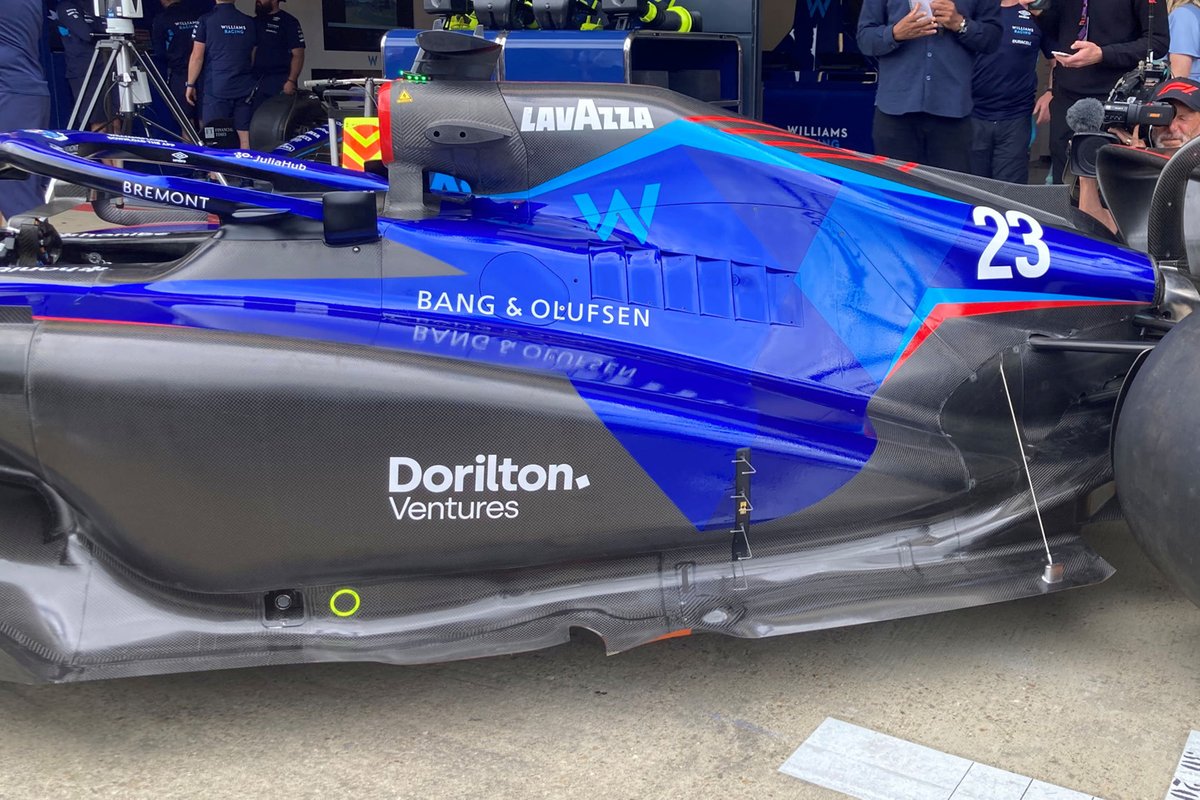 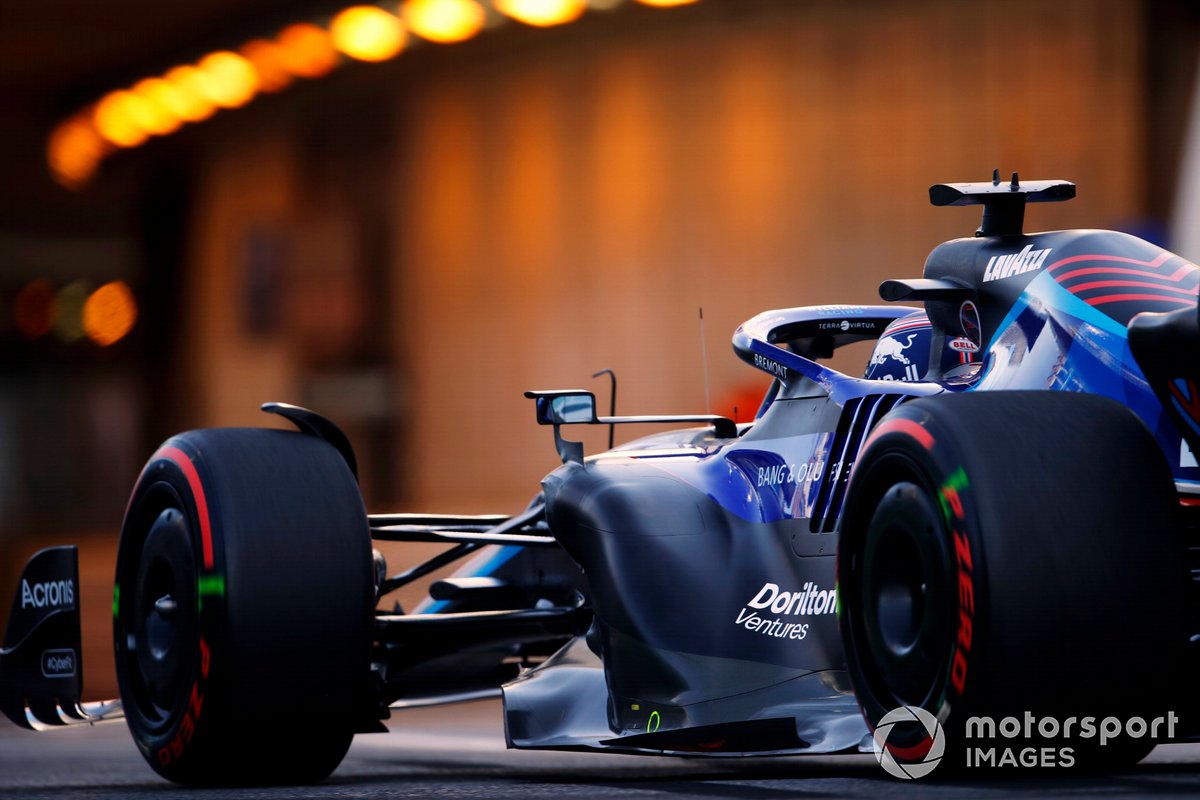 The fences have an impact not only on the performance of the underfloor but also the flow over the floor’s upper surface too.

In both cases, the changes made further down the floor will also work hand in hand with one another. In this instance, the team has opted to discard the triangular-shaped floor edge wing and bring the floor arc forward, which has a dramatic effect on the overall geometry of the floor. 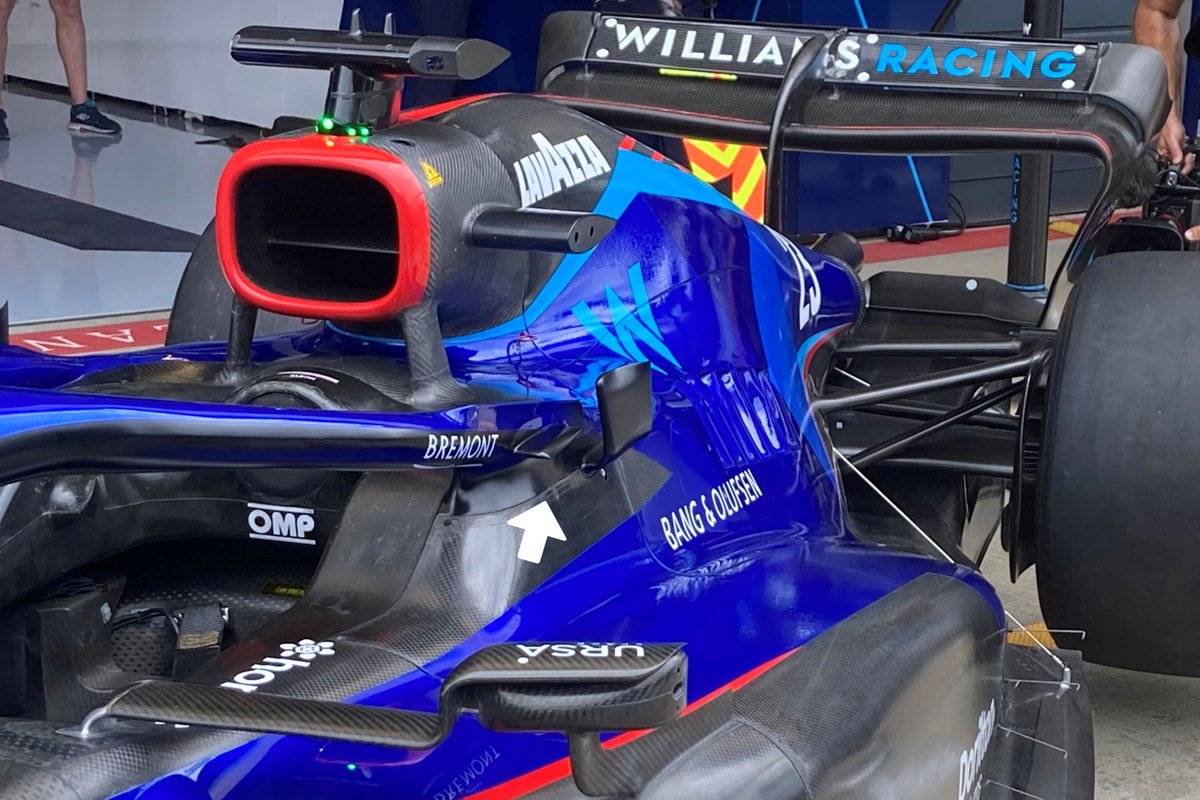 The halo has also been the recipient of some changes, with two winglets added to its rear legs as they transition into the bodywork. These come in the form of the type of winglet seen deployed by other teams in this region, albeit seemingly at a flatter angle on the FW44.

Meanwhile, an L-shaped winglet is mounted just behind it, with both set to help redirect the airflow travelling down over the sidepod downwash ramp, over the engine cover and improve relations with the suspension fairings, which have also been revised in order to maximise performance.

At the rear of the car, the team has also redesigned the diffuser and brake duct winglets in order to take advantage of all of the modifications made upstream of them.